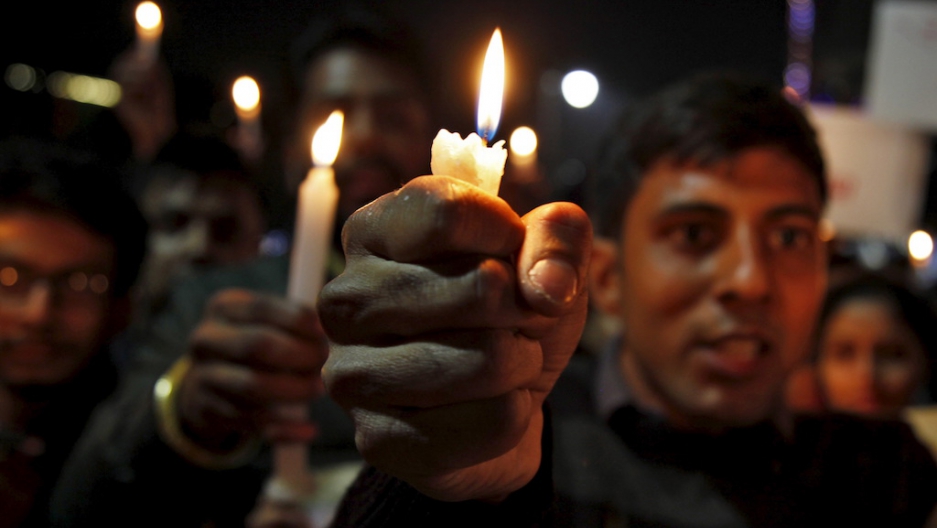 Students attend a candlelight vigil in Chandigarh, India, Jan. 7, 2016, for the soldiers killed in a militant attack at Pathankot air base.
Credit: Ajay Verma
Share

NEW DELHI, India — This month, the strained ties between India and Pakistan are being tested yet again.

Back in December, a surprise visit to Pakistan by Indian Prime Minister Narendra Modi, on his Pakistani counterpart Nawaz Sharif’s birthday, was seen as a strong gesture of goodwill. Talks between their foreign ministers were scheduled for Jan. 15.

Then, almost predictably, everything went wrong.

At least six gunmen attacked the Indian Air Force base in Pathankot, Punjab, killing seven soldiers and a civilian. The Indian army’s counter-offensive went on for four days. Links to Pakistan were assumed, and evidence that implicated Pakistan-based terror group Jaish-e-Mohammad was quickly found. The talks, after much speculation, have been “deferred.”

The residents of Pathankot burned effigies of Nawaz Sharif, blaming the neighboring country for betraying India once again. Opposition politicians and news media angrily accused Modi of being naïve enough to believe that Pakistan, hand-in-glove with terror outfits, would ever agree to peace.

India needs a four-point strategy (not SAARC or Lahore dinner). You know the known enemy: So: Isolate, Contain, Punish and Fight.

" You cannot change your neighbours but you can finish them " #Pathankot

The outpouring of vitriol against Pakistan is not new. It has occurred after every terror attack in the 69 years since the two countries were carved out of British India in 1947, and sometimes in between.

“Obviously there is a very troubled relationship in the past and there is no getting away from it,” said Pallavi Raghavan, a historian of India-Pakistan relations at the Centre for Policy Research in New Delhi. “There was a very traumatic partition in 1947. Many families that became influential in India and Pakistan came from refugee families who had traumatic experiences during the partition.”

Four wars, a nearly impermeable border and poor travel and communication links have added to the alienation and prejudice, according to Raghavan. Even children learn a nationalist version of history in each country that teaches them a longstanding rivalry with the other.

Different governments that have held power in India may also have something to do with the animosity.

More from GlobalPost: If there's one thing India won't tolerate, it's being called intolerant

“We have a deeply felt, inherent Pakistan bias, both in the Indian middle class and Indian media,” said Happymon Jacob, a professor of disarmament at Jawaharlal Nehru University who has participated in informal diplomacy between the two countries. “[For decades] the state has been telling the Indian people and media that Pakistan is evil, that Pakistan has done this that and the other.”

Looking at India’s loud public rhetoric against Pakistan this month, the state’s narrative seems to have taken hold.

“I can give you an endless list of reasons as to why you are responsible,” Arnab Goswami, a popular Indian news anchor, told his Pakistani guests at a televised debate he hosted after the attack. Similar anger was visible across Indian news channels, and on the streets.

“We shouldn’t go to the talks. India is a big country and Pakistan can never attack us, but they are habituated to carrying out these attacks and they will never listen to us. What is the point?” Pramod Kumar Pal, an auto-rickshaw driver in New Delhi, told GlobalPost.

Much of this anger is now directed at Modi, who won many of his nationalist supporters with a hawkish stance on Pakistan. His visit to Sharif last month was seen as a betrayal, an unwillingness to “teach India’s neighbor a lesson.” According to Jacob, Modi’s Hindu nationalist party the BJP is disappointed and confused by his peace efforts.

“Modi thought that given his popularity, he would be able to carry the day in reaching out to Pakistan,” said Jacob. “[But] we have a 24/7, [TV rating] seeking, very virulent Indian media that is completely anti-Pakistan. Some of the parties that were promoting dialogue with Pakistan are completely opposed now to Pakistan simply because they want to give the BJP a taste of its own medicine.”

More from GlobalPost: Why it took a lost Indian girl 10 years — and a Bollywood movie — to get home

Despite many canceled talks over the years, however, relations have never been permanently severed. Raghavan attributes this to an equally large but silent group of Indians who are open-minded about Pakistan.

“It’s always better to go for talks, without them we cannot reach a solution,” said Praveen Gupta, a footwear store owner in New Delhi. “There is no advantage in war. We cannot let terrorists who oppose our prime minister’s efforts succeed.”

It is similar pragmatism on the government’s part, and its belief that at least a part of the population shares it too, that has made politicians who were once as anti-Pakistan as Modi come around, says Raghavan.

“At the end of the day, eventually, somebody has to talk to somebody else [and that] is recognized across the political spectrum in both India and Pakistan,” said Raghavan. “[The outreach] was pragmatic recognition that there has to be dialogue with the country across the boundary. There is no other option, really.”