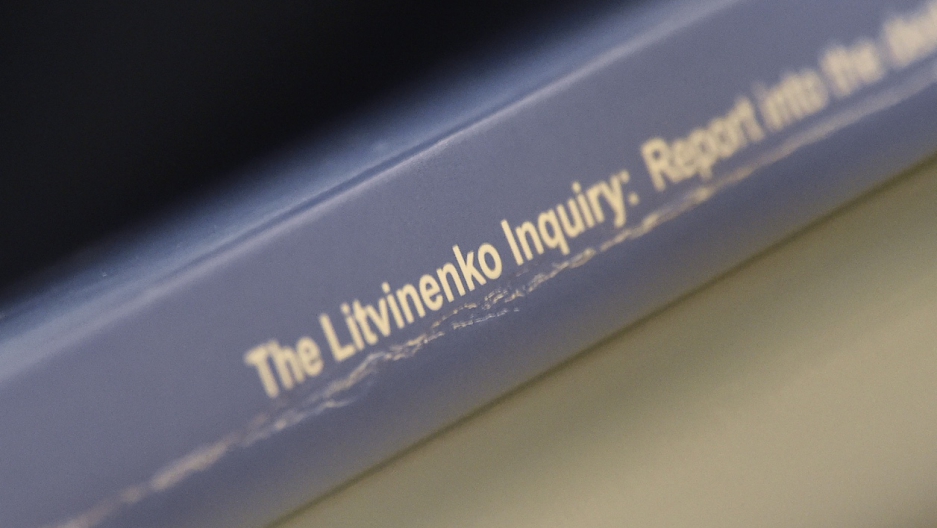 A copy of The Litvinenko Inquiry Report is seen during a news conference in London on Jan. 21, 2016.
Share

It is a case filled with international conspiracies. It is the kind of story that will almost surely end up on the desk of some Hollywood agent.

Almost 16 years ago a former Russian spy named Alexander Litvinenko fled Russia. He and several other Russian intelligence workers had been critical of the Russian government’s involvement in organized crime. Fearing for his life, Litvinenko went to London.

From London he would continue his investigations into Russian organized crime, writing two books. But in 2006, after drinking a cup of tea laced with poison, Litvinenko fell ill. He died soon after, but not before signing a deathbed statement declaring that Russian President Vladimir Putin had personally ordered his assassination.

It was a monster controversy in the United Kingdom. A British parliamentary committee would later call the murder a “miniature nuclear attack on the streets of London.”

Litvineno’s widow eventually succeeded in calling for an inquiry by the British government. The results of that inquiry were released today, nearly a decade after Litvinenko’s death. And it found, with what appears to be little doubt, that Putin likely did order the murder.

Litvinenko’s defection, his eventual murder, and now the release of this inquiry have all gone a long way to sour relations between Russia and the West. For Russia’s part — the state has always denied involvement — a foreign ministry spokesperson said the government regretted that the inquiry had become “politicized.”

The inquiry alleged that Putin had personal reasons for wanting Litvinenko dead, which makes everyone wonder what those personal reasons would have been, and if they had anything to do with Putin’s alleged connections to organized crime.

Asian markets have suffered more losses, following the United States. Worldwide everyone seems to be a little skittish. Yesterday stocks fell to one of their lowest points since 2009.

Some analysts seem to think this stumble is temporary, driven by falling oil prices and a slowing Chinese economy. But the truth is, there are a few really good reasons to worry about the world’s economy right now.

First of all, emerging markets are facing a debt crisis. The US Federal Reserve set interest rates at almost zero during the financial crisis. That led many emerging market institutions to take advantage by grabbing some cheap loans. Well, interest rates are rising again and the dollar is strengthening, so those debts are becoming a lot harder to pay back.

China’s slowdown is also freaking everyone out. The International Monetary Fund has downgraded its global economic growth forecasts for this year and next, citing stagnation in China and weak commodity prices. But what’s most concerning, writes GlobalPost’s Allison Jackson, is the potential that China could decide to further devalue its currency to prop up the country’s labor-intensive manufacturing sector. “That could lead to a damaging global currency war.”

Insanely cheap oil right now has the potential to fell whole governments, especially in places like Russia and Mexico, where oil revenues are key to economic — and political — stability. Falling oil prices can also lead to global deflation.

So, basically, it's time to start worrying.

There has been a lot written about the Turkish president’s pivot toward authoritarianism. He has jailed numerous critics of his government, including journalists. And he has brutally cracked down on various protests, most notably in Istanbul in 2013.

These days the government of Recep Tayyip Erdogan sometimes goes to absurd lengths to protect the president’s image. A woman who made an obscene hand gesture at the president in 2014 (he was then the prime minister) has lived through such official paranoia for more than a year now.

She made the gesture next to Erdogan’s bus as he made his way to a rally for local elections. She was quickly arrested. Since then she has had to suffer through no fewer than six hearings. In the final hearing yesterday, the court sentenced her to nearly a year in prison.