Children crowd around Zein in a camp in southern Aleppo.

Five years into the war in Syria, it is the women who endure so much of the burden, especially in rebel-held areas.

They survive shelling and barrel bombs from the Syrian government and, more recently, airstrikes from Russia. Some have been living under siege with little food and hardly any medicine or electricity for almost four years. With so many men killed or missing, it’s up to the women to run their community, and they’re making a difference in people’s lives, including their own.

Like 25-year-old Zein, who refuses to leave Aleppo despite the daily shelling. She recalls the time when the peaceful uprising started to turn violent, and a shortage of trained medical staff compelled her and fellow activists to volunteer at their local field hospital.

“I learned how to stitch wounds, how to remove shrapnel,” she told The World from her home via Skype. “We’ve taught ourselves the basics of triage very quickly, and there were times when we couldn’t walk because the floor was full of wounded people.”

Learn more from Syrian women on the ground

A few months ago, the Syrian government carried out an airstrike on the field hospital, and several of Zein’s activist friends were killed. Now she spends most of her time doing humanitarian relief work, and she leads an all-male team of aid workers as they distribute food and medicine to families in the area.

“I’m usually the one who goes up to the front line despite the snipers and fire fighting in order to deliver a basket of goods to some family stranded there. The guys are too jittery to do it, and they’re amazed when I do,” she said, referring to the team she leads.

The war has forced Zein to live by herself, away from her parents, which is highly unusual. Even before the war, both men and women typically lived at home until they got married.

But Zein’s family is now dispersed all over, which is typical these days as one in two Syrians has fled his or her home. Zein’s siblings are in Turkey and her parents are stuck in rural Aleppo under the control of Islamic State, where Zein doesn’t dare to go.

I ask her how the war has changed things for women like her in what’s largely a conservative, Muslim society. She says there have already been significant shifts, at least in perception.

“Before the war, women mainly stayed at home, cooking and caring for the family. But now, men work in a field hospital? Well so do I,” she says.

“Men have started to carry arms? Well, we have here in Aleppo an all-women’s brigade, and they fight on the front line. I’m not necessarily for the idea of carrying arms, but this has really changed perceptions. That a woman can do anything a man can do.”

Still, in some of the hardest hit areas, the lives of women have regressed, like in the rebel-held Damascus suburb of Ghouta. The area has been under siege for almost four years, enduring government airstrikes and cluster bomb attacks. In August 2013, it became known as the site of a chemical attack.

Women there now scavenge for fire wood. They wash clothes by hand, and spend hours making bread from scratch.

And child marriage, which was rare before the war, is on the rise again.

Maimona is a 30-year-old activist who’s fighting that trend. She heads a child welfare organization called Herras, Arabic for guardianship, and oversees schools that are struggling to stay open. 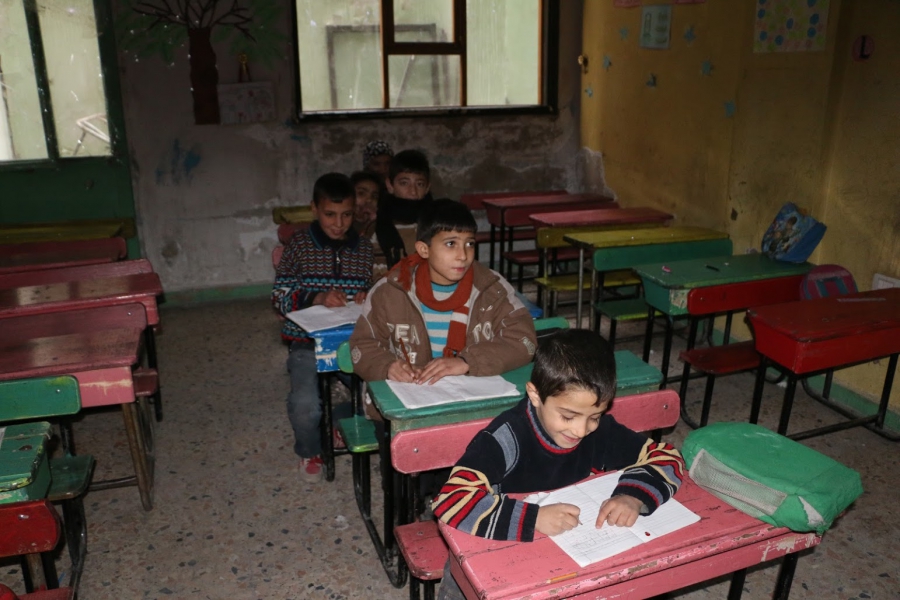 “We were shocked the other day when a 12-year-old girl stopped showing up to school, and we learned that her family wants to marry her off,” said Maimona from her home in Douma via Skype. “We try to intervene in these cases, but it’s very difficult. Parents feel relieved to have one less mouth to feed.”

But despite the daily risks, Maimona says the extreme needs of the community have forced even the least educated women to get involved in running things. She describes women in their thirties, forties, even older, enrolling in adult education to earn their high school diploma.

“Seeing them sitting in school chairs with that look in their eyes, as if to say they haven’t missed the train at all, that it is in their hands to change, to improve, to learn. It was very moving to witness that. And I tell them how proud I am of them,” she said.

Many of these women have gone on to work in field hospitals or schools — Maimona estimates that 80 percent of the people working in those places now are women.

“Perhaps this is a silver lining. When we started the Syrian revolution, it was also a revolution for women. And when the war is over, women’s accomplishments will remain.”