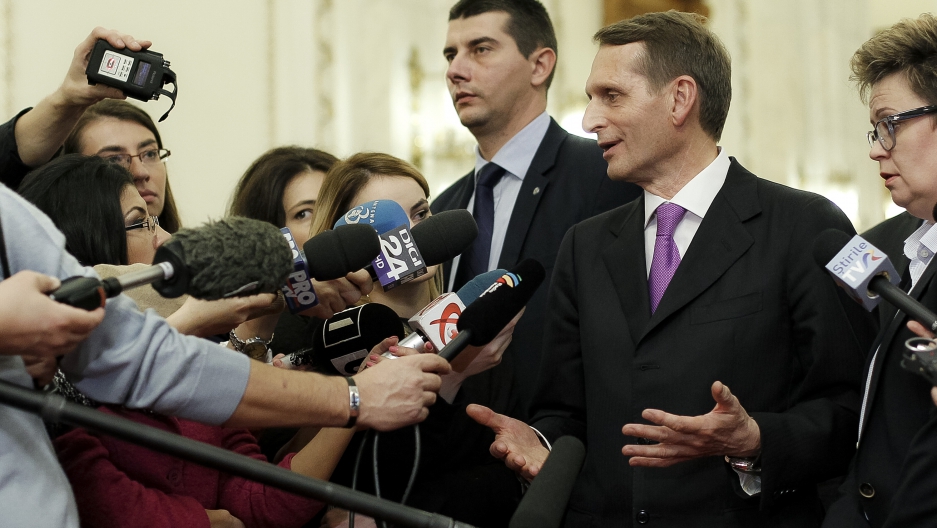 Russian State Duma lower house of parliament speaker Sergei Naryshkin speaks to the media in November, 2015. He is among those implicated in an investigation into lawmakers' academic credentials.

The people who adopt federal laws in Russia are under scrutiny — or rather, their degrees are. If the State Duma deputies have cheated in their academic careers, who knows what else they might lie about?

On January 13, the Dissernet project reported on the results of their three-year investigation of plagiarism in the doctoral theses of Russian State Duma members. Dissernet found that 52 out of 450 lawmakers could be labeled “falsifiers and liars,” as the project puts it on their website — or, as lawyers insist on calling it, those MPs who “incorrectly adopted or cited” information from other sources in their scientific works. What this means is that one in nine politicians in the lower house of the Russian parliament has a suspect or blatantly fake academic degree.

It should come as no surprise that the biggest group of politicians with faked degrees or plagiarized dissertations (35) comes from the ruling “United Russia” party. Nine people represent the Communist Party of Russia, five — the Liberal Democratic Party, and three more cheaters come from “A Just Russia.”

The infographic created by Russian newspaper Novaya Gazeta in collaboration with Dissernet presents a color-coded map of the state of academic honor in the State Duma, showing all the seats occupied by deputies from various parties. 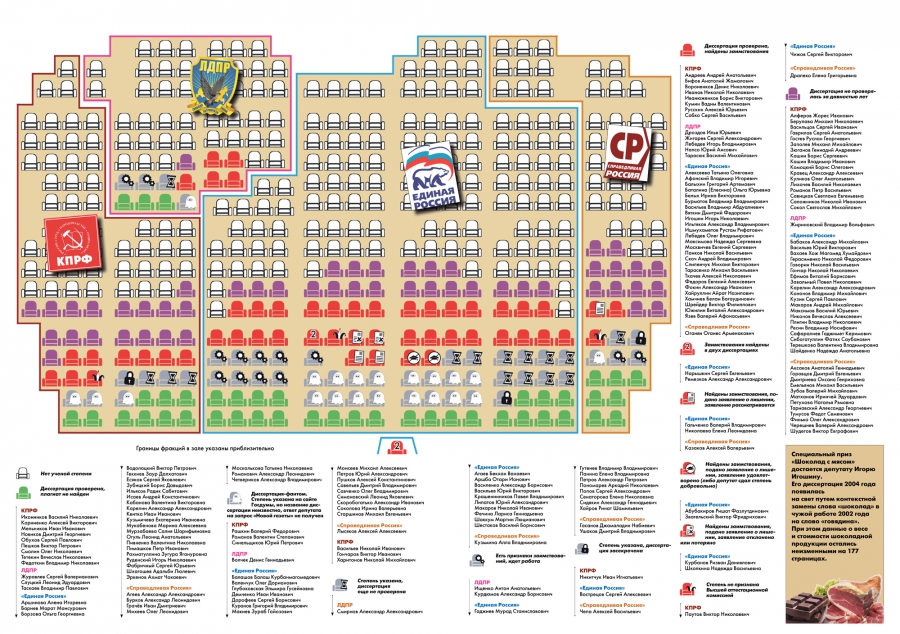 A color-coded map of the state of academic honor in the State Duma. The purple seats represent those whose claimed dissertations are exempt from investigation.

Although the majority of Russian MPs (color-coded as white) don’t hold a candidate’s or doctoral degree, quite a few claim one or both in their official bios. Dissernet notes that among those claiming academic degrees, 50 individuals (marked in purple) were exempt from investigation since their dissertations were written a very long time ago, before they went into politics.

Dissertation texts of 42 of the investigated lawmakers (marked in green) showed no signs of plagiarism or copyright violations.

The 52 individuals whose works showed signs of plagiarism or whose degrees were not recognized as valid by a state committee are singled out in red. This group includes the head of the Duma, Sergey Naryshkin (also of “United Russia”), whose candidate’s and doctoral theses were both found to contain plagiarized content.

The infographic indicates that a certain number of deputies working in the Duma have what is called a “phantom thesis”: the degree is mentioned right there on the State Duma website, but the dissertation itself — even its title — is nowhere to be found. These people’s Duma seats are marked in gray with a little ghost icon. A few other dissertations are still being investigated.

The most epic plagiarism was found in the dissertation of the “United Russia” deputy Igor Igoshin. In 2004, he borrowed someone's research written in 2002 wholesale and simply replaced the word “chocolate” with “beef.” Except for these changes, Igoshin left 177 pages of text untouched.

It seems like this “auto-replace” approach is the easiest way to buy a degree without buying the thesis itself, through simply bribing the dissertation board: in other cases of wholesale plagiarism examined by Dissernet, “North-West” was substituted with “North Caucasus,” “rats” with “people,” and “people” with “women.”

A typical expert evaluation by the Dissernet activists looks like a table where each page is colored: the more colors – the more sources that the text was copied from or used without acknowledgement. The analysis is done using the special software developed by Dissernet experts, as well as by manually examining texts page by page.

Image from Dissernet
Credit: The page-by-page table representing all the sources used without acknowledgment in the candidate's thesis of Duma speaker Sergey Naryshkin.

The roots of the movement took hold in 2013, when scientists Andrei Rostovtsev, Andrei Zayakin, Mikhail Gelfand, Kirill Mikhailov, and journalist Sergey Parkhomenko started running the show. Three years later, Dissernet has become an extended network of activists, researchers, and reporters who work voluntarily. The financial support for the community comes from crowdfunding.

Crucially, Dissernet activists don’t stop once the plagiarism is exposed on their website and social media channels. They also file appeals to the state's Higher Attestation Commission and to various courts in order to divest officials and public figures of their bogus degrees.

The wheels of juridical machine are spinning slowly, with squeaks, but we make them spin – before it is too late, abandon your degree if you found yourself on the Dissernet website.
—Andrei Zayakin, theoretical physicist, co-founder of Dissernet, in an interview to Bumaga website.

Previously, Dissernet has exposed cheating and plagiarism in academic works by Saint Petersburg governor Georgy Poltavchenko, children's rights ombudsman Pavel Astakhov, Minister of Culture Vladimir Medinskiy, Minister of Transport Maxim Sokolov, and many other prominent figures. Despite being widely covered by the mass media, these disclosures did not have any noticeable consequences for these top-level officials.

In November 2015, however, based on an appeal from Zayakin and Dissernet, a courtdivested “United Russia” deputy Rishat Abubakirov of his doctorate. Ironically, it was this very lawmaker who “launched” the whole Dissernet movement in the first place: angry with the Magnitsky Act passed in 2013, Zayakin had decided to check the validity of the deputies’ academic degrees — and Abubakirov happened to be at the top of the alphabetical list.

Dissernet has managed to collect an extensive database of 5,000 bogus dissertations and has no intention of stopping. Instead, the activists have started a side project called RosVuz (stands for “Russian University”) that concentrates on investigating school headmasters and heads of universities who hold doctorates. Through their meticulous and thorough sleuthing, the activists are revitalizing both politics and academia in Russia, while also trying to unravel the fake dissertation chain (known as the “thesis-for-sale” black market) along the way.