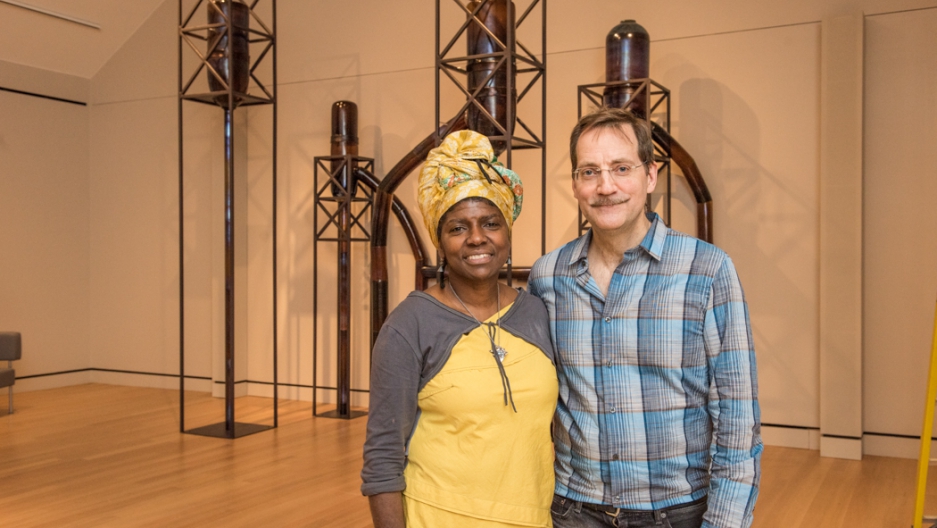 In the years when she couldn’t travel home to Cuba, artist Maria Magdalena Campos-Pons had a recurring dream.

She tears up telling me the story. We are standing outside the two galleries that house her current show, Alchemy of the Soul: Maria Magdalena Campos-Pons, at the Peabody Essex Museum in Salem, Massachusetts. There's no one label to describe Campos-Pons. She's a painter, photographer, sculptor, performance artist and more. The day we meet she’s exhausted from the installation, but her fatigue can’t dent the passion she exudes for the project and the ideas behind it.

“She’s really one of the most dynamic artists working today,” says Josh Basseches, the curator of the show and a key player in commissioning the new work at the heart of it: an architectural exploration of Cuba’s sugar trade.

Campos-Pons is descended from African slaves, forced to work in that trade. The rural landscape of her early childhood is still dotted with the decaying sugar mills and rum distilleries left over from its heyday. In the installation, Alchemy of the Soul, Elixir of the Spirits, she has created towering blown-glass works that evoke those industrial ruins.

“Over the years we have seen these ghostly structures in the Cuban landscape, and the idea for this piece was born on the road, seeing fragments in the distance, just fragments,” she says. 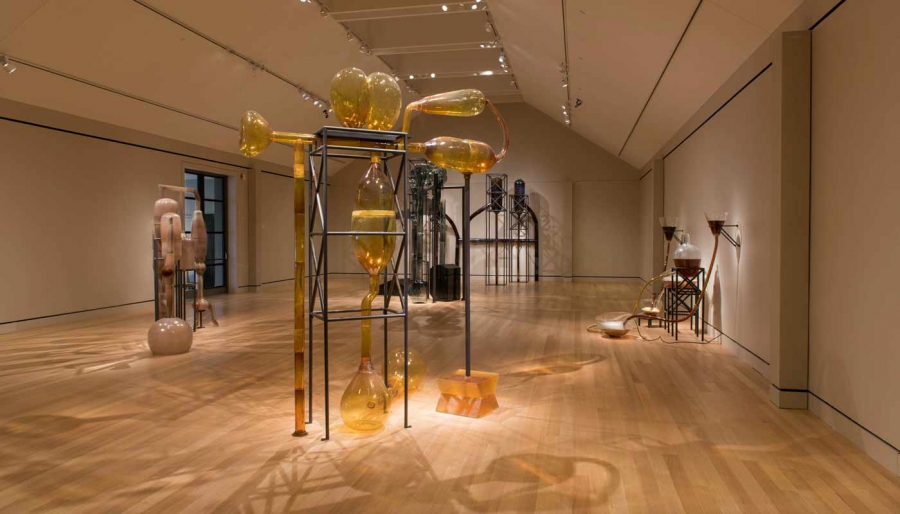 “It’s not just about the materiality of sugar, but it’s a piece too about the experience of migration, of exile, of displacement,” Campos-Pons says. “Because I come from a lineage of people displaced forcefully to come to the Americas to work in the industry that produced this ultimate product, rum and sugar.”

I’ll never be able to separate the show itself from the experience of seeing it with Campos-Pons and her husband and musical collaborator Neil Leonard, a composer and saxophonist. They talk about their work in a stream-of-consciousness way that only amplifies its effect. The force of what they have created hits you as soon as you enter the first gallery. The glass and metal sculptures with their sugar cane striations and bulbous vessels rise from the polished floor like eccentric trees in a sparse forest.

Imitation rum bubbles through a distillery on a far wall. You can smell it and feel its moisture. And Leonard’s haunting music, including his own saxophone, ripples out in waves from multiple speakers.

“Part of the sound is from Magda’s dream,” he says, using the name she prefers to go by. “Those ethereal ghostlike sounds move slowly. Not walking rhythm or even breathing rhythm, just very slow, meditative sounds for that dream. Magda didn’t tell me about that dream so much for this piece, but I intuited that the music has to bring us to a space where we can contemplate the work.”

You can also hear liquid dripping and gurgling, both from the distillery in the gallery but also in the music that surrounds us.

“Those are actually sounds of Magda and me pouring rum into bottles and miking it really closely,” Leonard says.

His composition also includes the voices of members of the Cuban rumba group Los Muñequitos de Matanzas. “We found out these iconic singers had actually worked directly in the sugar industry,” he says. He recorded them on a recent trip to Cuba, thrilled at the chance to collaborate with them.

Somehow all these elements manage not to compete with one another in the space.

“We want you to experience the juxtaposition of what you smell, hear, see,” says Campos-Pons. “These textures, these three languages, these elements mix and bring you to this place of visual dislocation.” 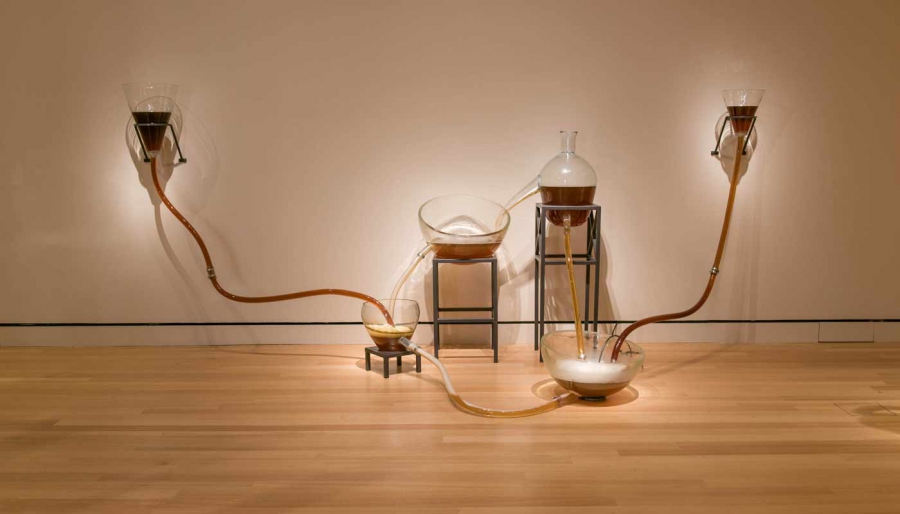 In a small room off the gallery you can view interpretative videos that add layers of meaning to the project. You see their recent visit back to Campos-Pons’s childhood home in a former slave barracks, a place she hadn’t visited for thirty years. You see her greeting family and friends and exploring the landscape, including the abandoned industrial sites she remembers.

At some basic level, Campos-Pons says she’s simply trying to turn pain into beauty — the pain and oppression of slavery and the sugar trade, and the pain and anguish of her own displacement over the years. Her career in Cuba was well on its way by the time she came to the Massachusetts College of Art as an exchange student in 1988. She met Leonard there, but returned to Cuba nonetheless, only to leave again in 1990, this time for good. After she moved to the US, there was a long period when she was unable to return to Cuba. These days she can go back and forth much more easily, but she still suffers the loss she experienced in those years.

“I don’t know that I ever recovered from that period in which I was totally unable to go back to Cuba,” she says. “But the weight of the complications and the difficulties and the animosity and the punishment you receive for living in the US when you were born in Cuba under Castro never outweighed my love for Cuba and my desire to keep a connection with Cuba. I have a deep love for Cuba that is beyond Cuban politics.”

The exhibition continues through April 3, 2016. A digital publication with photographs, videos, and essays is available online.