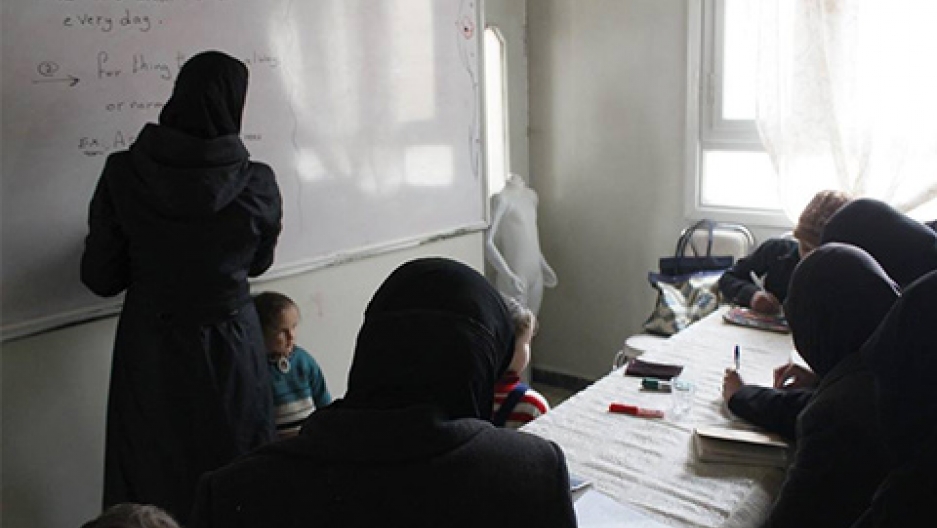 A class at a women's center in Ghouta.

Courtesy of Women Now for Development

The news out of Syria is so often grim that it can be easy to forget that there are still local activists on the ground, civilians who haven’t fled, been kidnapped, or killed by airstrikes, barrel bombs or ISIS.

As more and more men die or go missing, the ones taking leadership in what’s left of Syrian civil society after nearly five years of grinding conflict are increasingly women — and they want to be heard.

“We speak a lot about these women, about Syrian victims, about war, but to listen to the voice of these people, that is very important to do — to learn from them, to learn from their resilience, to learn about how people are able to make beauty under all this war,” says Mariah Alabdeh, director of Women Now for Development, a NGO that supports women’s centers in rebel controlled territory.

In a new story, Rasha Elass illustrates the changing role of women in Syrian society, as women who, before the war, may have lived with their parents or husbands, are now taking leadership roles in their communities and families, particularly in rebel controlled areas. This is also true of families who have fled the country — in Iraq, Jordan, Egypt and Lebanon, more than 145,000 Syrian families are led by women, according to a UN report.

But the voices of theses young female community leaders are so infrequently part of the discussion when it comes to Syria or the refugee crisis that we wanted to go a step further, and give you a chance to ask questions directly of a group of women. Keep reading to find out how to take part.

Elass was able to verify that all of these women are who they say they are. They're all in their 20s and work in one the four women’s centers in the Damascus suburb of Ghouta. The area has been under siege for almost four years, enduring government airstrikes and cluster bomb attacks. In August 2013, it was the site of a chemical attack.

Questions can be from the mundane — how they keep warm in winter, what they eat, where their kids go to school — to the far reaching, like what they hope for a peace process or how they think the situation for women has shifted in the last several years. Questions can be submitted via our Facebook event. They will be translated and sent to the women on the ground. Elass will post their translated responses to the Facebook event page once they're ready.

Their answers will, most likely, run the gamut from serious to snarky. For example, they have a distinct way of thinking about the pilots who bomb their cities. When the strikes start early, they joke the pilots didn’t even take time for morning coffee. When they stop in the afternoon, they joke it must be lunch break.

Siham, 25, opened one of the centers last September, and is one of the women set to respond to questions. She and a small group of women offer vocational classes. They recently got a sewing machine they share.  She told us she sees the centers as giving women — who may feel caught up in the despair of war or cut off from the world — a chance to establish a direction.

“Every woman has put in place a plan for her life, and a goal, and she takes advantage of the opportunities available at the center to help raise her level of education, especially after the ignorance that had befallen our country, and the war and the tragedies,” she wrote.

The women at the center carry a lot of responsibility in their personal and professional lives. “Their family needs them and they are the breadwinners, the ones who are making decisions because we have less and less men in the family. They are taking a new role,” Alabdeh says.

But the humanitarian situation in Ghotta is not improving in the short term. Civilians must use tunnels controlled by a militant group to access the outside world, and the threat of airstrikes is constant. She says the process of getting questions and responding to them could help the women feel supported, while also giving people outside of Syria a chance to learn from a group of resilent women what life is really like in their country.

While the gains women have made in Syria are precarious, Alabdeh still sees reason for optimism.

“It’s a reality for the Syrian future that there will be more women than men,” she says. “So I believe that the Syria of tomorrow will be built by women.”

** Submit questions for Siham al Najjar and other women in Ghotta via our Facebook event.

Other women set to respond:

Ayat. I’m 24 years old, and a graduate of a vocational college. I studied chemistry and mathematics for two years in Ghouta. Currently I’m in charge of the organization’s Misraba Center, and I’ve done many adult education courses in various fields. My English is decent and I’m good at computers. Every job I did had it’s own pluses, but at the center there are significant advantages. For example, a woman may have no hope left in life, and she tells you her pain because she trusts you. The center changes lives, all while you witness the women’s success stories in addition to all the other responsibilities like management. And that’s what I like about my work.

Laila. I'm laila from the Eastern Ghouta in Syria. I'm 24 years old and I've studied Agriculture Engineering  in Damascus University. Unfortunately I couldn't finish it because of the siege, so I've worked in different positions. The most important of it is working with the centers, which help women to develop themselves. Our revolution gave us lots of new opportunities and let us be more creative in every field in life .

Other women may just in and will be introduced via the Facebook event.