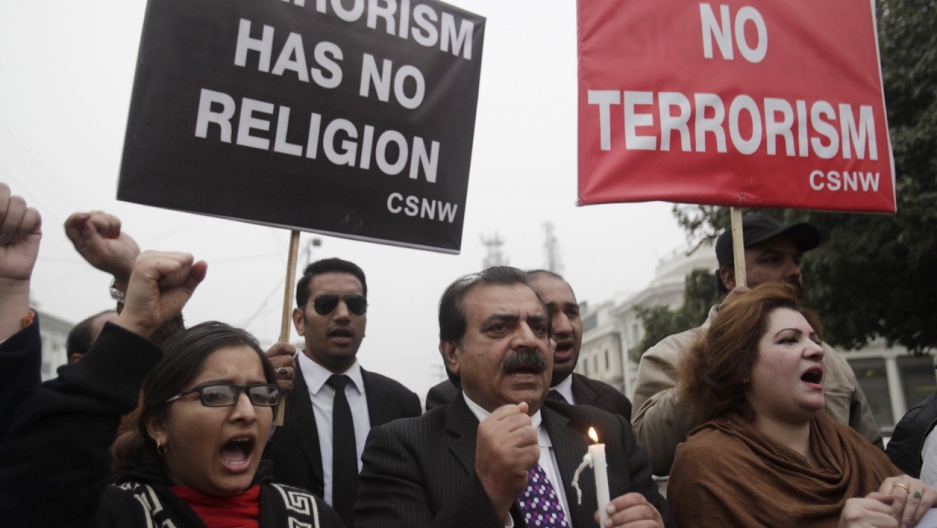 People chant slogans as they hold signs to condemn the militant attack at Bacha Khan University in Charsadda, during a protest in Lahore, Pakistan on Jan. 20, 2016.
Share

There has been another horrific attack on a university campus. This time in Charsadda, Pakistan.

Bacha Khan University was celebrating its founder, Abdul Ghaffar Khan. Khan was an independence activist and pacifist in the 1920s. He was known as Bacha Khan. The militants appeared to time the attack to the celebrations, when the campus was at its busiest.

So far 22 innocent people are confirmed dead, along with four terrorists. The attackers lobbed grenades into crowds and then opened fire using automatic weapons.

The attack comes about a year after another awful attack on a school just a couple dozen miles away from Bacha Khan. In that attack, in December 2014, the Pakistani Taliban killed 145 people, including 132 children.

Wednesday’s attack on Bacha Khan was reminiscent of an assault on Garissa University in Kenya in April 2015, which led to the deaths of 147 people.

Chinese Premier Xi Jinping is in Saudi Arabia. He’ll be heading to Iran later in the week. On the first day of his visit Xi threw his support behind Saudi’s war in Yemen.

Saudi Arabia began an air assault on Yemen in March 2015. Later in the year, it launched a ground invasion. The goal of the invasion is to push back the Houthi rebels, who had successfully ousted the Yemeni government in Saana, the capital, and gained control of much of the country.

The Yemeni government had been friendly to both Saudi Arabia and the United States, allowing the latter to conduct its counterterrorism campaign inside the country largely unimpeded. The Houthi rebels, meanwhile, are Shiite and loosely aligned with Saudi Arabia’s nemesis, Iran.

Saudi Arabian airstrikes, relying on logistical help from the Americans, have obliterated Yemen. The strikes have targeted numerous civilian buildings and other infrastructure. Thousands of Yemenis have been killed. Historical cities and neighborhoods have been torn to shreds. Even hospitals now lie in ruins.

Meanwhile, a strict Saudi blockade on Yemen — approved by the United Nations — has created the world’s worst humanitarian crisis. Desperately needed deliveries of food now sit idle on ships off of Yemen’s coast, where they spoil before they are delivered to some of the hungriest populations on Earth.

It’s a wonder if Xi, who has endeavored to be more involved in Middle East diplomacy, had anything to say about any of this during his visit. It will also be interesting to see how his visit to Iran goes later in the week. The Iranians can’t be happy about Xi’s declaration.

China, of course, is not the only one offering support to Saudi's devastation of Yemen. The United States has long aided Saudi Arabia in its Yemen proxy war, providing intelligence and other logistical support. It also — it almost goes without saying — sells Saudi Arabia huge numbers of weapons.

So does the United Kingdom. British arms companies, in fact, have ramped up weapons sales to Saudi Arabia since the start of the conflict in Yemen. By some estimates British companies have increased deliveries by 100 times.

Are those bombs the same ones that have fallen on multiple Yemeni hospitals run by Doctors Without Borders? Are they the bombs that killed 43 innocent people celebrating a wedding? That slaughtered an entire fishing community?

Editor's note: The headline on this story has been corrected from an earlier version.