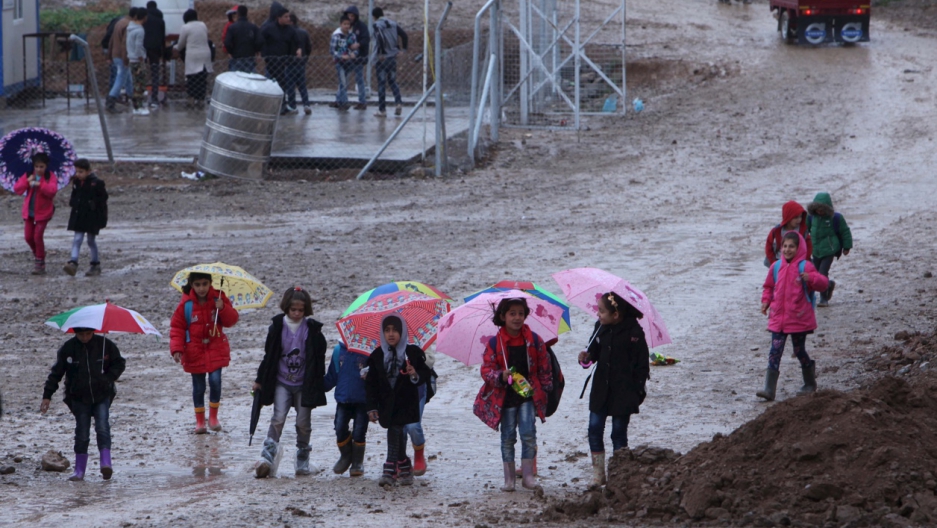 Displaced children hold umbrellas as they go to school on a rainy day in Arbil, north of Baghdad, on Nov. 9, 2015.
Share

Some 19,000 civilians have been killed in Iraq in the last year. Some 3 million have been forced from their homes. And both those incredible numbers are probably way low.

This is all according to the United Nations, which has released a new report. A rise in violence in Iraq began in September 2014 when the Islamic State swooped in and took control of large parts of the country, including the large city of Mosul, where it is still in power.

The takeover shocked the world. And, coupled with the filmed execution of American journalist James Foley, helped propel the United States into the conflict. The United States began bombing Islamic State positions in Iraq. Soon after it would start bombing neighboring Syria, where the Islamic State also took control of large areas.

The effectiveness of the airstrikes have been debated ever since. While the Islamic State has been pushed out of some territory, the victories have come much more slowly than US military planners had hoped. US-led airstrikes have also contributed to the civilian toll, which does little win over hearts and minds in the region.

The numbers in the report are estimates at best. They cover September through October. Officials believe that at least another 1,000 people have been killed since October. And the truth is, the reporting of deaths is now very difficult, especially in areas the Islamic State controls. So the true death toll is probably a lot higher.

The report also found that probably a third of Iraq’s population is going to be in need of aid this year. That’s about 10 million people.

UK lawmakers spent three hours yesterday debating whether or not US presidential candidate Donald Trump should be banned from traveling to their country.

Trump, who is now campaigning in the southern United States, didn’t respond to the debate. He did, however, earlier threaten to pull out of a planned $1 billion golf course investment in Scotland if he was banned.

The UK parliament was forced to debate the issue after an online petition to ban Trump from entering the country garnered some 600,000 votes. In the end, the lawmakers did not decide to ban Trump. But during the course of three hours they did pummel the US politician so severely it became a spectacle.

At various times he was reduced to an “attention seeker,” and called a “fool,” a “buffoon,” a “demagogue” and a “wazzock,” which is apparently slang for someone who is both stupid and annoying.

The whole thing began when Trump said the United States should ban all Muslims until the country can improve security. It caused a global outrage. Not to be cowed, Trump has repeated his position several times since.

A number of lawmakers in the British parliament are Muslim, and offered to take Trump on a tour of their communities, mosques, to eat some curry, and much more. For Trump, it would probably be a pretty educational experience.

For many years President Viktor Yanukovych led Ukraine. He was a man of extraordinary corruption. His home was ostentatious beyond belief. And his behavior was hardly any better. His decisions as president plunged the country into rebellion. He eventually fled to Russia in February 2014.

These days, despite some attempts at reform, that brash kind of crony capitalism still plagues the country. And it manifests often in the actions of Ukraine’s filthy rich kids.

GlobalPost correspondent Dan Peleschuk writes that the “wild-and-crazy kids” of Ukraine are often known to be hard-partiers and big spenders. With the help of social media, this has elevated them to near-mythical status among average Ukrainians. Those who are not among the pointlessly rich, make it all work with an average monthly salary of $200. Talk about income inequality.

The elite offspring are even called “mazhory,” which means “superior ones.” Well one of these superior little rich kids just killed a woman in a car accident. He claims he inexplicably passed out. But pretty much everyone else in Ukraine suspect he was more likely drunk or on drugs. They also suspect his connections will, as usual, make him an exception to the law.