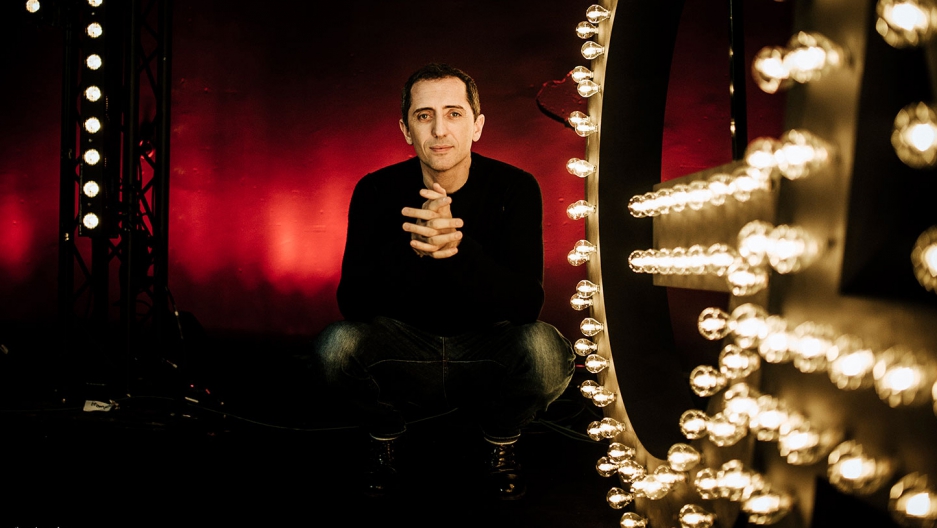 In comedy, timing is everything.

And the timing was perfect for Moroccan-French comedian Gad Elmaleh to come by the studio recently to star in our wordy, nerdy podcast, The World in Words.

In France, he's huge, performing in arenas for thousands of fans. Elmaleh describes his style as a combination of physical and observational comedy. He’s often been compared to Jerry Seinfeld. In fact, he played the voice of Seinfeld’s character in “Bee Movie”

But Gad Elmaleh recently left fame, fortune, and French behind to pursue a stand-up career in the US in English for literally a fistful of dollars.

His new show, "Oh My Gad" opens in New York City this January.

It's the culmination of a dream that he spoke about last year with Seinfeld in the web series "Comedians in Cars Getting Coffee."

“My dream is to be able one day to go on stage in English in a comedy club here and to do my thing in English.”

Elmaleh was born in Casablanca, Morocco, and grew up speaking a mixture of French, Arabic and Hebrew. He's done stand-up sets in all three languages. However taking his act on the road to the US and doing a set in English has been hard work, says Elmaleh. He studies the English language and pronunciation for two hours every morning. He has been documenting this English language journey and recently put out the short film: "10 Minutes in America." In the film, he gets advice from the likes of Jerry Seinfeld and Sarah Silverman.

Sarah Silverman warned him that mere translation wouldn't work. "You have to start over," she tells him in the film. "It's not just translating — you have to craft a joke. You are going to need some years."

It took getting on stage and bombing for Elmaleh to heed Silverman's advice.

“In the beginning when I got here in the US I said, ‘You know what? I have a great show. It’s 90 minutes in French that killed every night. I’m going to translate that.”

And that's what he did. He worked with his English teachers to translate his jokes.

“I immediately realized that that was not at all what I needed to do,” says Elmaleh.

All the jokes that had killed with a French audience didn’t make sense to Americans.

“For example, I had many jokes about when you go to the restaurant the air conditioning is freezing and the first thing they do is bring you a glass with ice water. So French people were laughing a lot and then I did this at a comedy club in English and Americans were like, ‘Yeah, well we do that.’”

And doing this new material in English has been unexpectedly liberating, he says. He is more free and daring in English than in French.

“It’s stressful, it’s hard but it’s also liberating,” explains Elmaleh. “With English it’s not that I have nothing to lose but I take a little risk — I like it.”

3:09 Gad figures out that translating comedy from French to English isn’t as easy as merely translating jokes

6:29 The first joke that Gad ever told in English

7:51 Feeling like a different comedian in English versus French

9:11 The cliché about Texas is not true (For more about Texas clichés check out the World in Words episode: "Talking Texas in Iran")

12:50 Gad isn’t as balanced and together as you may think

14:00 Gad jokes about restaurants in America: Are you still working on that?

15:00 Gad’s thoughts on being alone and starting all over again