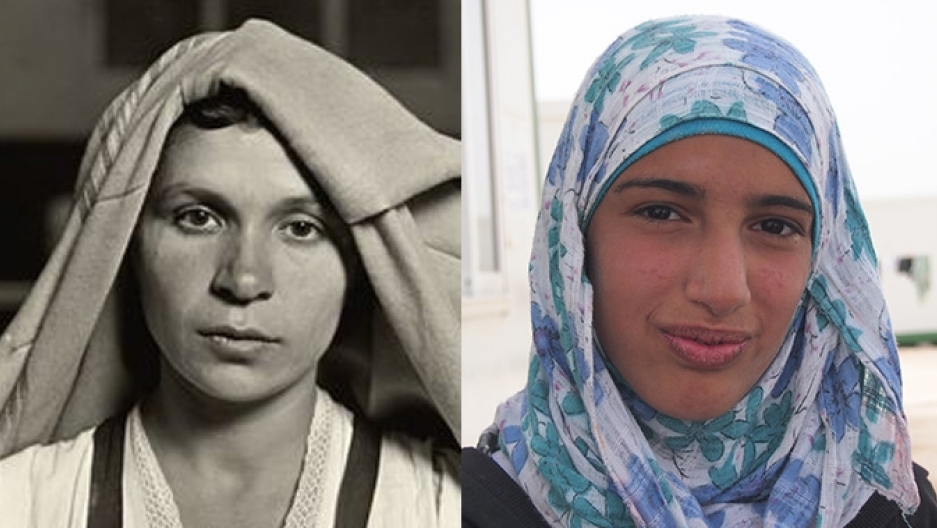 Left: An Albanian woman from Italy at Ellis Island, 1905. This woman is wearing traditional clothes from her homeland. At times the island looked like a costume ball with the multicolored, multinational clothing.

Right: Zeinab, 14, lives in Zaatari camp in Jordan with her family. She left Syria when armed men attacked her neighborhood. She fled with her mother, her sister and her brother. Her father was killed in Homs, Syria. (Caroline Gluck/Oxfam)

Some pictures reveal the past and expose our ignorance. This set of images might even change our perception toward Syrian refugees.

New York Public Library recently made available more than 187,000 digitized non-copyright photographs for the public to download. Among the many hidden gems is a series of photographs of immigrants taken at Ellis Island by American sociologist and photographer Lewis Hine in the early years of the 20th century.

At first glance, these black-and-white photographs reminded me of the many images I have seen in the past three years during the refugee crisis in the Middle East. A further search for 'Syrian refugee' in the Reuters image library found many similar photographs.

The people in these photo sets, taken almost 100 years apart, share many things — baggage, temporary shelters, young children, boats and the long wait for a better future. One thing remains the same — they left their home for a new life in a strange land.

However, a significant number of Americans, whose ancestors made it to the US in the early years of the last century, now see those who want to follow their ancestors' path, not just as different, but as enemies.

Want to help Syrian refugees? These groups you may not know are doing important work.

In fact, more than 12 million immigrants entered the US through Ellis Island, the country’s first federal immigration station during its 62-year operation from 1892 to 1954. Most of the immigrants were from Europe including Greeks, Hungarians, Poles, Slovaks, Bohemians, Italians, Russians and Jews.

They crossed the Atlantic Ocean in search of peace and prosperity, the same hope shared by the current Syrian refugees. In the 19th and 20th centuries, they fled famine, economic depression and religious, racial and political intolerance. Now, Syrians are fleeing a violent war in their homeland.

Note: The captions for all Hine's photographs were written by Hine himself. 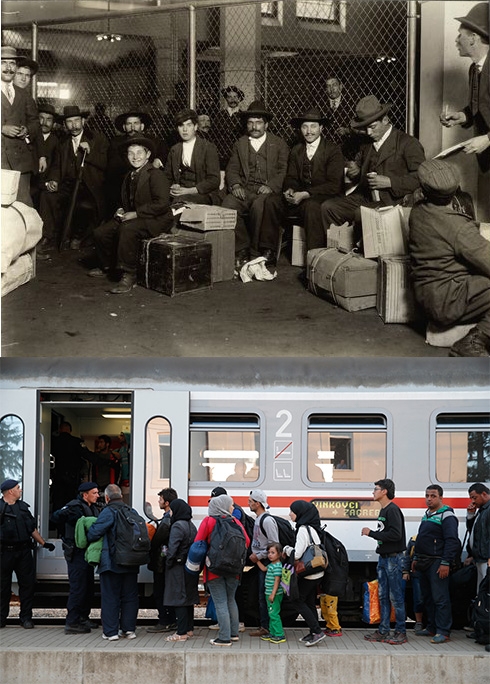 Above: A group of Italians in the railroad waiting room, Ellis Island, 1905. These are some of the Italians who became the barbers, waiters, chauffeurs and mayors of America. Some became the artists and sculptors of our national Capitol and of other public buildings. (NYPL/Lewis W. Hine)

Below: Migrants queue to board a train at the railway station in Tovarnik, Croatia September, 2015. More than 30,000 migrants, many of them Syrian refugees, have entered Europe through Croatia from Serbia since September 15, when Hungary barred their entry to the EU over its southern border with Serbia with a metal fence. (Marko Djurica/Reuters) 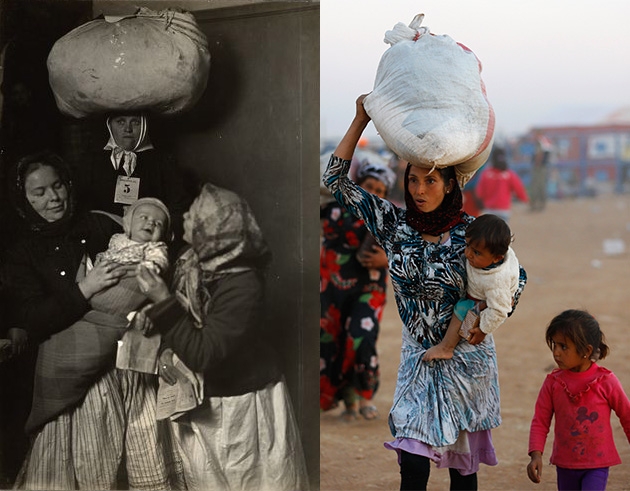 Left: A Slavic mother and child at Ellis Island, 1905. The woman in the background carries her baggage in typical peasant fashion. The identification tag on her chest is the first touch of American civilization. (Lewis W. Hine/NYPL)

Right: A Syrian Kurdish woman carries a child and her belongings after crossing into Turkey near the southeastern town of Suruc in Sanliurfa province September, 2014. Turkey is struggling to manage an influx of more than 130,000 Syrian Kurdish refugees since September 19. (Murad Sezer/Reuters) 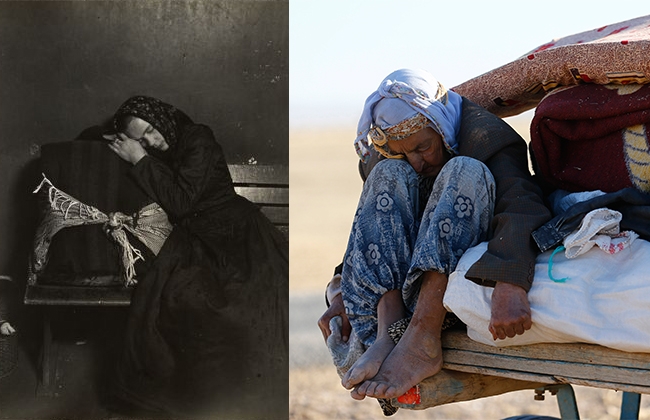 Left: Slavic immigrant at Ellis Island, 1905. Beds, three tiers high, were still not sufficient to accommodate the 5,000 immigrants who arrived daily. Many, like this young woman, were forced to sleep on benches, chairs or on the floor. (Lewis W. Hine/NYPL)

Right: A Kurdish Syrian refugee sits on a carriage after crossing the Turkish-Syrian border near the southeastern town of Suruc in Sanliurfa province September, 2014. (Murad Sezer/Reuters) 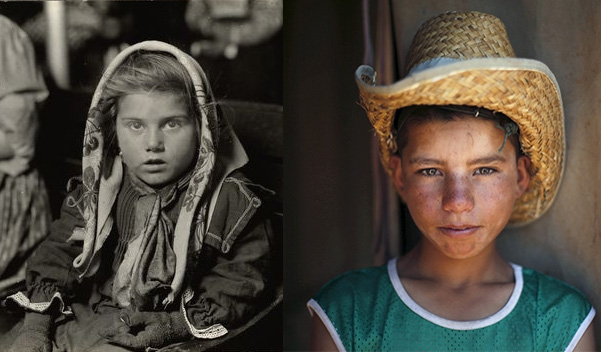 Left: This Italian girl finds the wonders of Ellis Island and the New World far more fascinating than the first penny clasped in her hand, 1926, Ellis Island. (Lewis W. Hine/NYPL)

Right: A Syrian refugee child, who has been living in Jordan with his family more than two years after fleeing the violence in their Syrian hometown of Idlib, poses in front of their family residence in Madaba city, near Amman, Jordan, 2015. (Muhammad Hamed/Reuters) 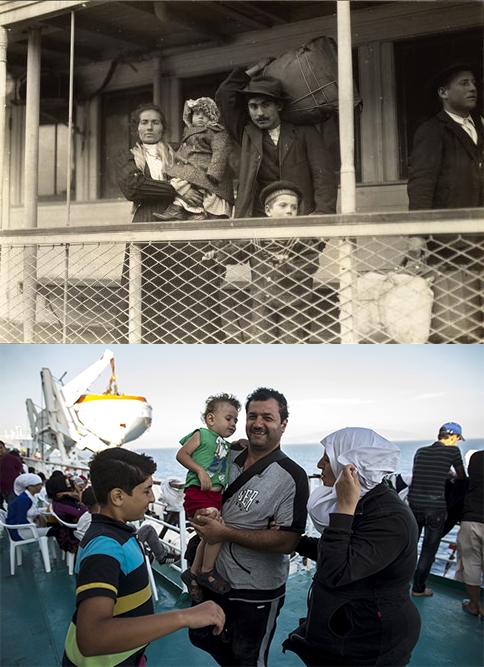 Above: Italian family en route to Ellis Island. This is the small boat of the Immigration Service which carried aliens from the pier to Ellis Island. Sometimes the number of immigrants waiting to be transferred was so great, that they waited for several days and nights before the little ferry boat could bring them to the island. Lewis W. Hine/NYPL)

Below: Haytham, 43, a Syrian migrant from Damascus, smiles and carries his son Zine as he jokes with his wife Noor and his son Ahmed, 11, on a passenger ship while traveling from the Greek island of Lesbos to Athens, September, 2015. (Zohra Bensemra/Reuters) 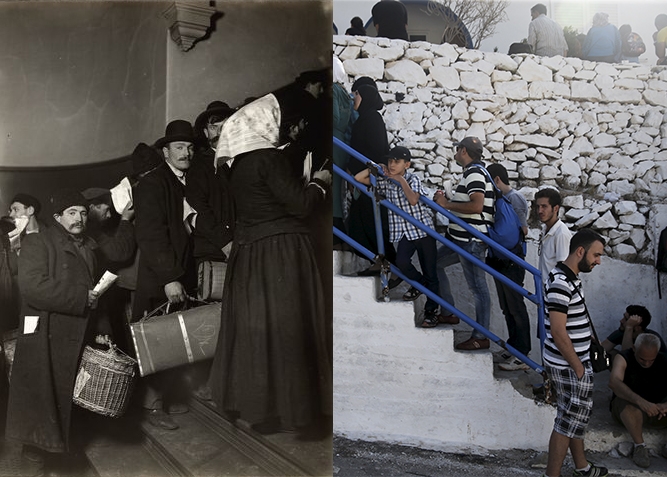 Left: Climbing into America — Ellis Island, 1905. Here is a Slavic group waiting to get through an entrance gate. Many lines like these were prevalent in the early days. There was no room to keep personal belongings, so the immigrants had to carry their baggage with them all the time. (Lewis W. Hine/NYPL)

Right: Syrian refugees line up for a registration procedure at the police and coast guard station on the eastern island of Agathonisi, Greece, September, 2015. Agathonisi, a tiny island with fewer than 200 residents, receives about 300 to 600 refugees and migrants every day, local authorities estimate. (Alkis Konstantinidis/Reuters) 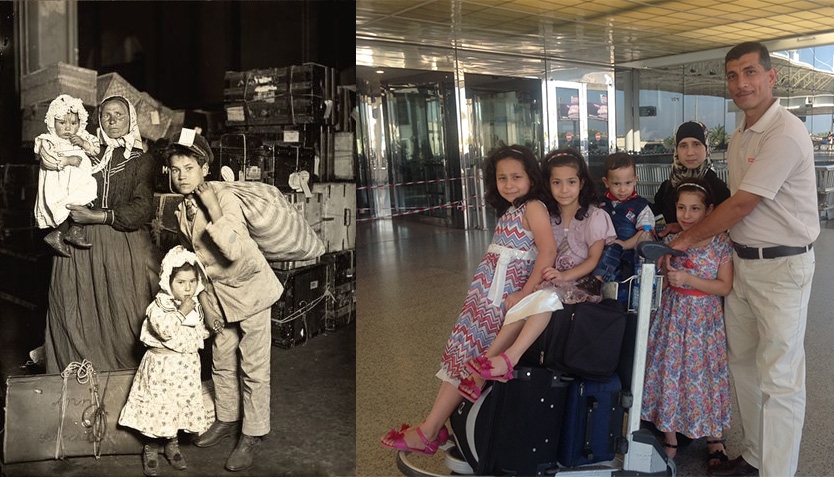 Left: Italian immigrants at Ellis Island, 1905. Lost baggage is the cause of their worried expressions. At the height of immigration the entire first floor of the administration building was used to store baggage. (Lewis W. Hine/NYPL)

Right: Resettlement of Syrian Refugees in Uruguay, 2014. Uruguay's Ministry of Foreign Affairs, the Ministry of Human Rights and UNHCR work together to ensure their smooth arrival and integration. (International Organization for Migration) 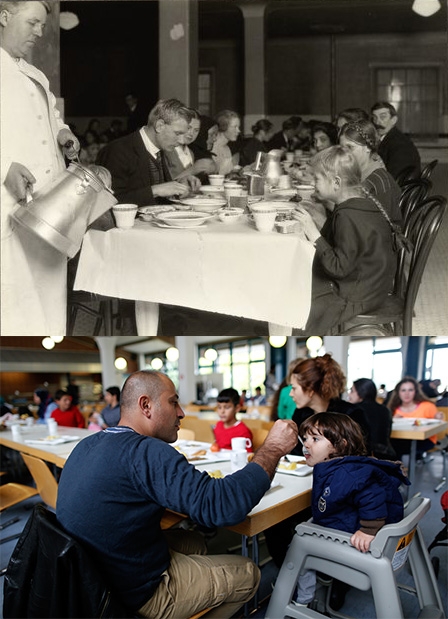 Above: A group of Germans having lunch at Ellis Island, 1926. (Lewis W. Hine/NYPL)

Below: A Syrian refugee family eats at the Friedland refugee camp in the central German village of Friedland, September, 2013. (Ina Fassbender/Reuters) 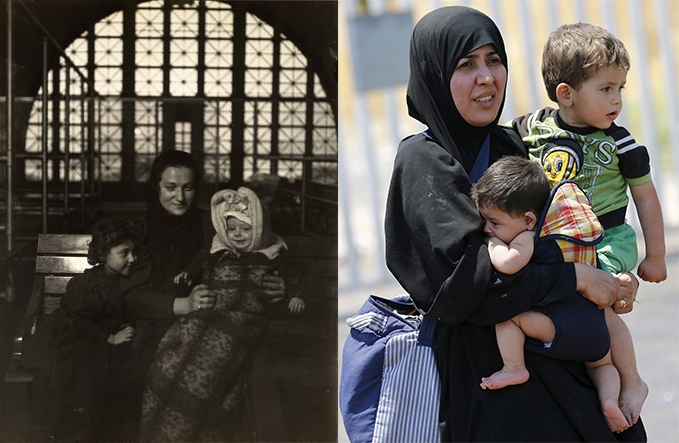 Left: Ellis Island, 1905. The large window in the background becomes a halo for this Russian family. (Lewis W. Hine/NYPL)

Right: A Syrian refugee woman, with her children, pauses at the Akcakale border gate after crossing into Turkey in Sanliurfa province, June, 2015. (Umit Bektas/Reuters) 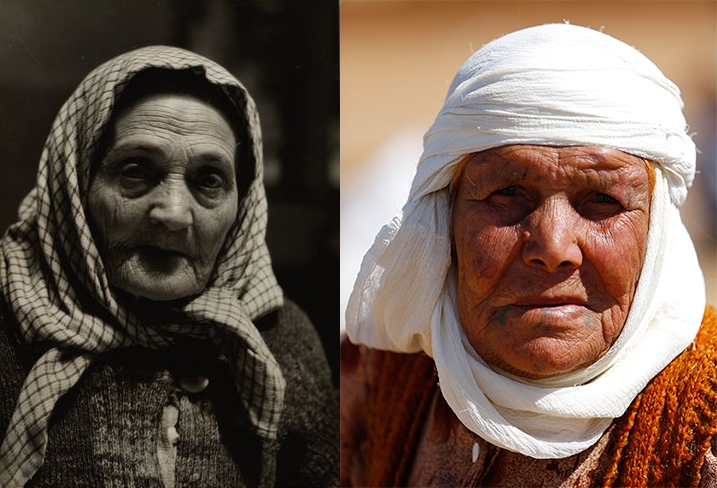 Left: Italian grandmother at Ellis Island, 1926. Ellis Island was not the only recipient of the great Italian immigration of the early 1900s. A very large number went to South America, settling in Argentina and Chile. (Lewis W. Hine/NYPL)

Right: Zarife, an 80-year-old Syrian Kurdish refugee woman from Kobani is pictured after crossing into Turkey near the southeastern town of Suruc in Sanliurfa province September, 2015. (Murad Sezer/Reuters) 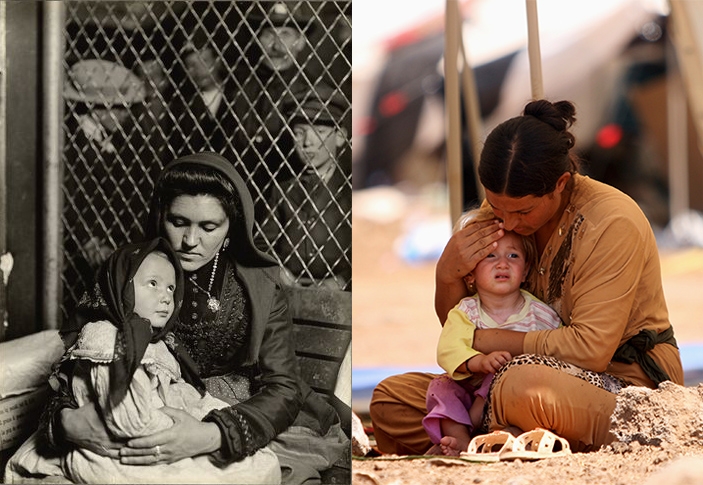 Left: An Italian mother and child, Ellis Island, 1905. This mother and child sit outside a detention cell. Sometimes 1,700 immigrants were crowded into a room which was built to accommodate 600. (Lewis W. Hine/NYPL)

Right: A refugee woman from the minority Yazidi sect, who fled the violence in the Iraqi town of Sinjar, sits with a child inside a tent at Nowruz refugee camp in Qamishli, northeastern Syria August, 2014. (Rodi Said/Reuters) 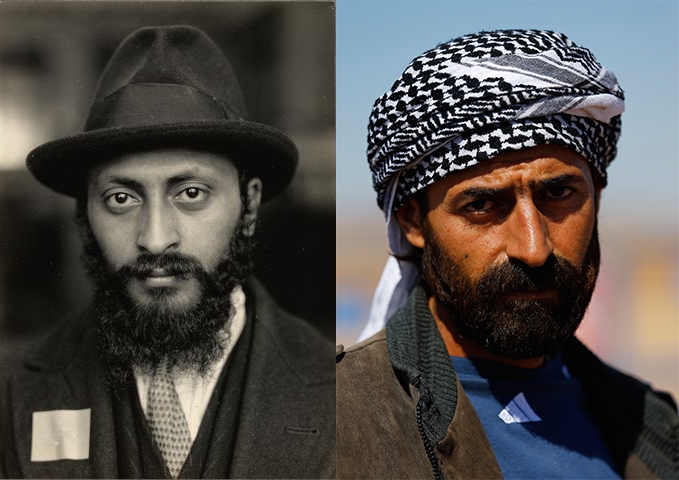 Left: Armenian Jew, Ellis Island, 1926. This Armenian Jew probably left his native land to escapte the Turkish persecution of the post-war period. His beard is typical of that worn by the orthodox Jews of Europe and the Near East. (Lewis W. Hine/NYPL)

Right: Malek, a 43-year-old Syrian Arab refugee man from Minbic is pictured after crossing into Turkey near the southeastern town of Suruc in Sanliurfa province October, 2014. (Murad Sezer/Reuters) 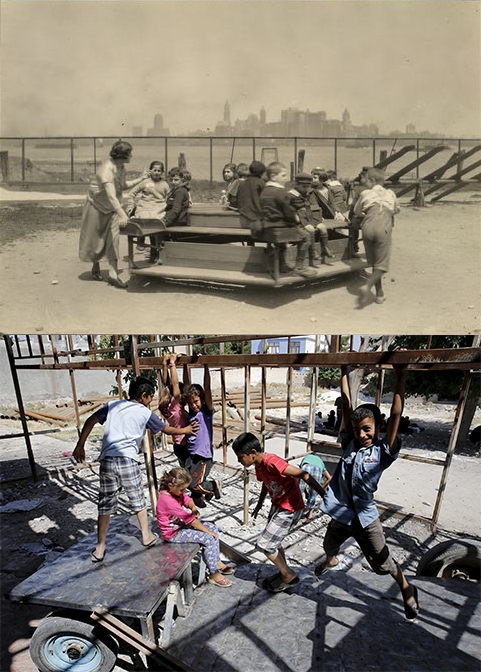 Above: Children on the playground at Ellis Island, 1926. This enclosure is part of the improved conditions on the Island. Here the elders too could play baseball, box, or play some of their native games. In the background New York skyline can be seen. (Lewis W. Hine/NYPL)