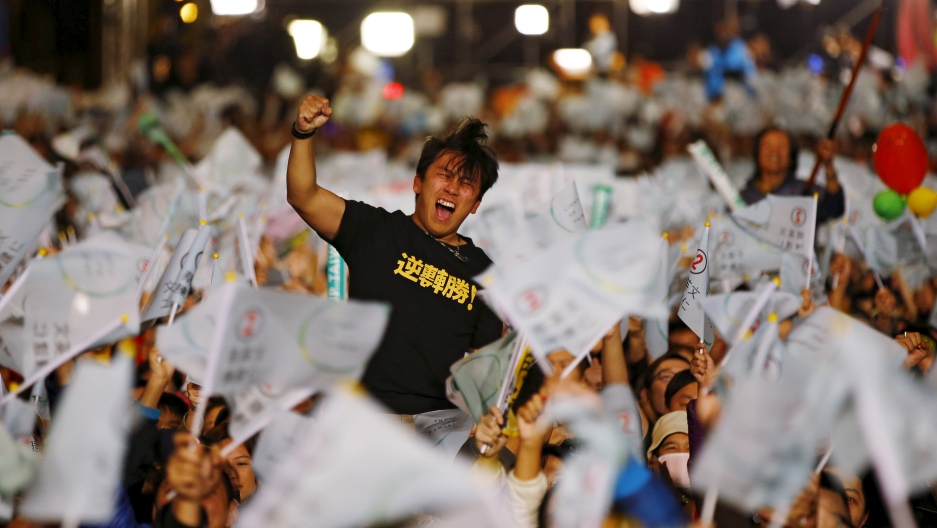 That island is, of course, Taiwan. Largely ignored by the American media, Taiwan’s election on Saturday was easy to miss in the West.

But it shouldn’t be ignored. Whoever leads Taiwan presides over a simmering feud that, if ignited, would suck the US into a very nasty conflict.

Tsai Ing-wen, the 59-year-old leader of the opposition Democratic Progressive Party, became Taiwan’s first female president over the weekend with 56.1 percent of the vote. It was the lowest voter turnout in all recorded elections, with 66 percent going to the polls compared to 74 percent in the 2012 election. Tsai will replace a president seen by many voters as too cozy with China — a nation that keeps more than 1,500 missiles pointed at Taiwan around the clock.

Tsai is not a wild-eyed firebrand. In fact, her demeanor can seem professorial. But she belongs to a political camp that more assertively insists on Taiwanese autonomy.

This vision enrages China, which considers Taiwan a “renegade province” that must be returned to the motherland — with violence if necessary.

China’s communist party is further incensed that the US sells missiles and jets to Taiwan to help the island fend off any potential invasion. The latest sale, approved in December, is worth $1.8 billion.

The US, reliant on China’s army of cheap labor and trillion-dollar loans, is these days less cavalier about stoking Beijing’s wrath.

Beijing’s state-run press has done its best to mock this deal, which it calls an “old trick” conjured up to “buoy a brawling and grim Congress, showing them that the US is still ... countering its future major rival.”

The Chinese press has called Tsai, who heads the Democratic Progressive Party, an enemy of harmonious relations with China who is prone to “evil talk.” The communist party strongly prefers Taiwan’s current ruling faction, the Kuomintang Party.

Taking the long view, this is ironic: The Kuomintang is the modern incarnation of a nationalist force that battled the communists for control of mainland China in a ghastly civil war.

The defeated Kuomintang fled to the island in 1949 and established the modern state of Taiwan. Despite its bloody history with the communists, the Kuomintang now promotes stronger ties with the People’s Republic of China (PRC ) — and that stance has driven away voters who fear Taiwan could be slowly swallowed by its authoritarian rival. Fears of Chinese aggression are warranted, said Shirley Kan, a retired policy analyst for the Congressional Research Service. Blaming Taiwanese voters for electing a pro-autonomy president, she said, “advances the PRC’s propaganda of putting the blame on Taiwan for raising ‘tension’ rather than the PRC itself for its non-stop and increasing threats against Taiwan and the rest of Asia in exercising democracy or defending itself.”

According to the US Defense Department, prepping for war with Taiwan is the “primary driver of China’s military investment.” The US has actively thwarted this mission by selling weapons to Taiwan since 1979. Back then, China presided over a dysfunctional economy and a mediocre military.

But much has changed. The US, now reliant on China’s army of cheap labor and trillion-dollar loans, is less cavalier about stoking Beijing’s wrath.

More from GlobalPost: The $500-billion-dollar reason the US Treasury has been soft on China recently

Despite the recent billion-dollar arms deal with Taiwan, “the overall trend is reduced [US] arms sales to Taiwan, not more,” Kan said. “Much of the responsibility rests with Taiwan in investing more resources in its own self-defense.”

It is now highly doubtful that the Pentagon would throw two nuclear-armed behemoths into war just to preserve democracy on a far-flung island.

US officials are hesitant to say this outright. But they have come close.

America’s reluctance to defend Taiwan against invasion was neatly summed up in 2005 by top US defense policymaker Richard Lawless: “As the lone superpower, our interests are plentiful and our attention short. We cannot help defend you if you cannot defend yourself.”

A Tsai administration, Kan said, will likely “pay more attention to defense and US defense cooperation” while building up its homegrown defense technology. (Despite its size, Taiwan has actually invented its own fighter jets, missiles and other gear with US assistance.) Tsai may be viewed as toxic by Beijing — “she has done nothing but embarrass herself,” says China’s media — but she is not expected to aggressively rile China.

Just like in America, the economy in Taiwan is deeply intertwined with mainland China. Polls indicate that voters fear an economic tailspin more than Chinese dominance.

So China doesn’t have to bomb Taiwan to punish it for perceived insolence. It could lob economic blows by cutting off the flow of mainland tourists or by hitting the island with embargoes. And that could turn voters against Tsai.

Whipping up anti-China fever would also hurt ties with Taiwan’s most powerful friend. The White House prefers that the China-Taiwan feud remain stuck in a non-violent “status quo” — and that’s exactly what she’s promising to do.

Still, Tsai won’t be rolling out grand overtures of friendship toward mainland Chinese. She has repeatedly undercut Beijing’s adamance that mainlanders and Taiwanese are one big family who happen to be temporarily estranged.

“People [in Taiwan] feel closer to Americans and Japanese,” Tsai said in a 2011 speech. “Why? Because they’re democracies ... and when China becomes a democracy, I think Taiwanese people will feel more comfortable and may feel more at ease when we’re with China.”