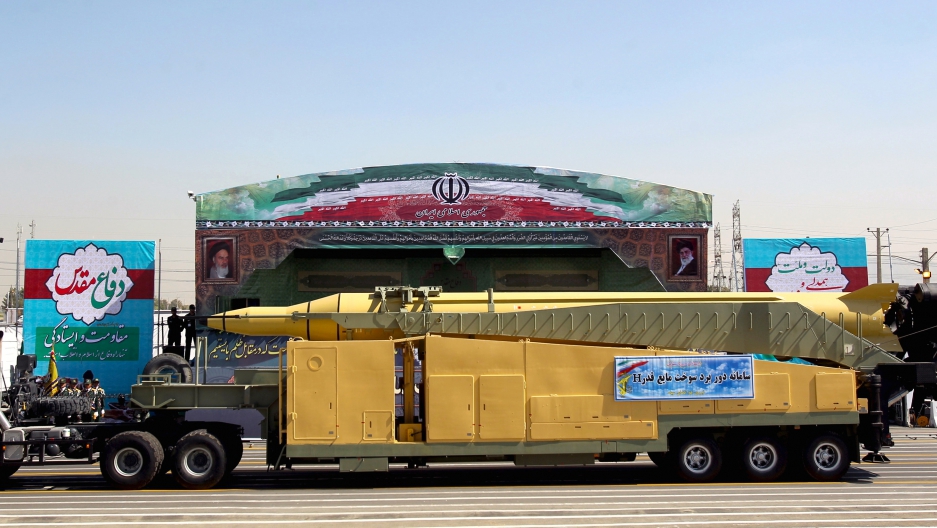 A military truck carrying a Qadr H missile drives past pictures of Iran's Supreme Leader Ayatollah Ali Khamenei (R) and late leader Ayatollah Ruhollah Khomeini during a parade marking the anniversary of the Iran-Iraq war (1980-88), in Tehran on September 22, 2015.

It’s the end of an era for Iranians, who can begin to emerge from years of punishing economic sanctions that have kept Iran’s national economy locked out of the global financial system.

But just one day later, the US Treasury Department announced yet another set of new sanctions for Iran, this time aimed at its ballistic missile program.

Iranian officials quickly denounced the penalties as having “no legal or moral legitimacy.”

In October, Iran tested a new precision-guided ballistic missile. By December, a United Nations panel determined that the test was a violation of a UN Security Council ban on testing missiles capable of carrying a nuclear warhead.

The Obama administration had said that sanctions on Iran’s missile program — along with sanctions for terrorist funding and human rights violations — would remain in effect, even after its landmark nuclear agreement with Iran is implemented.

But by mid-January, nothing followed that missile test. It’s now clear why. US administration officials say they were holding off on imposing new sanctions while they finalized a prisoner exchange that led to the release of five Americans detained by Iran.

On Sunday, as the news of the freed detainees dominated US headlines, the Obama administration announced the new round of sanctions targeting 11 Iranian entities and individuals linked to the country’s missile program.

“Iran’s ballistic missile program poses a significant threat to regional and global security, and it will continue to be subject to international sanctions,” said Adam J. Szubin, acting Under Secretary for Terrorism and Financial Intelligence. “We have consistently made clear that the United States will vigorously press sanctions against Iranian activities outside of the Joint Comprehensive Plan of Action — including those related to Iran’s support for terrorism, regional destabilization, human rights abuses and ballistic missile program.”

These new sanctions do very little by themselves, says Matthew Levitt of the Washington Institute for Near East Policy. But there is symbolic value to them, he adds.

Republicans in the US have made a lot of political noise about billions of dollars in frozen funds that are being released to Iran as part of the nuclear deal reached with the Obama administration. But there is apparently some confusion here, starting with the total amount of money involved.

“There’s been a lot of hype,” Levitt says. “You’ve seen or heard probably numbers in the $100 billion or $150 billion [range], the number seems to be much closer to about $56 billion.”

Some of that money is tied up in business arrangements that were made in years past and will not be available for spending by the Iranian government. But Iran is free to use most of those funds however it wants to.

“[Iran] has huge needs at home, but it’s also clearly committed to the war in Syria, to supporting terrorism and other things. We’re going to have to watch that very carefully. And that’s what these sanctions are supposed to help us do,” Levitt says.

All in all, Levitt says there are plenty of ways Iran can attempt to cheat on the terms of the nuclear agreement that is only beginning to be implemented now.

“But the deal could still be a positive thing if it is fully enforced,” he says. “We’re going to have to be extremely vigilant in how we pursue existing sanctions and how we array our collection platforms for intelligence in order to be on top of what they are and are not doing.”