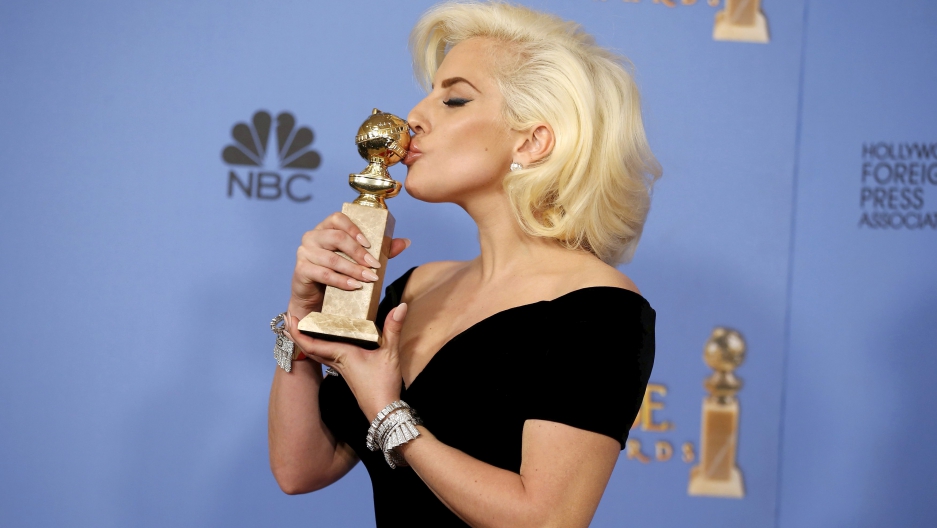 Lady Gaga poses with the award for Best Performance by an Actress in a Limited Series or a Motion Picture Made for Television for her role in "American Horror Story—Hotel" during the 73rd Golden Globe Awards in Beverly Hills, California on January 10.

EDITOR'S NOTE: Leonardo DiCaprio's smug surprise after a bump at the Golden Globes prompted this essay.

When I was a freshman at NYU and Facebook was only a year old and people created/joined groups like "I have dimples" and "Fake ID, please!," I remember coming across a Facebook group that broke my heart. It's name, something like: "Stefani Germanotta, you will never be famous."

The group was peppered with comments, sharp as porcupine needles, vilifying the aspiring musician for being an "attention-whore." Scores asked: "Who does she think she is?" I also remember one dude posting a flyer for one of her upcoming gigs at a local village bar. He had clearly stomped on the flyer, an outline of his muddy sole [soul] struggling to eclipse her name.

I couldn't shake the raw feeling of filth while scrolling down that Facebook page, but I pretty much — and quickly — forgot about that group and that girl with the intense raven eyes.

Until about five years later. I was on an Amtrak train from NYC to Philly, reading a Vanessa Grigoriadis New York Magazine profile on Lady Gaga. I floated somewhat mindlessly through the piece until I got to the first sentence of the second paragraph:

"Before the meeting, I assumed that someone with a stage name like “Lady” (her given name is Stefani Joanne Germanotta) was going to be a bit standoffish..."

HOLY S---, I screamed to an empty car (Those who hang with me will know that I actually shrieked). LADY GAGA IS STEFANI GERMANOTTA? STEFANI IS LADY GAGA?

I was overcome with a dizzying emotional cocktail of stage-mom-at-a-beauty-pageant and nerd-revenge triumph. But also shame. Shame that I never wrote on that group, shame that I never defended the girl with the intense raven eyes — the girl whose brave flyers were stomped on, probably somewhere near my dorm.

But again, I soon forgot about that revelation and that feeling. Feelings. They're so fleeting. Even more so, revelations. We need to constantly rediscover them every damn day.

Like last week, when I woke up to this meme.

I saw the muddy sole eclipsing her name. The eyerolls. The cowardly virtual-giggles. The "Who does she think she is?"

I've got a lot of feelings, but the easiest one to articulate: gratitude.

Stefani, thank you. Thank you for always thinking you're a superstar, for using your cracks to let the light come out more brightly.

Lauren Bohn is a Middle East correspondent for The GroundTruth Project.

Readers, have you ever taken part in a Facebook Group that you wish you hadn't? Let us know in the comments below.