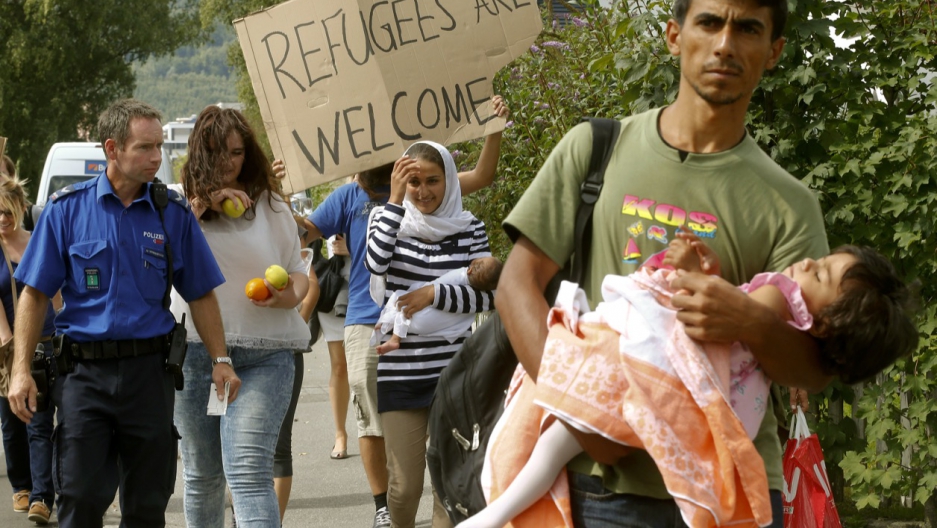 A Swiss police officer accompanies migrants from Syria carrying their children at the railway station in the northeastern Swiss town of Buchs on Sept. 1, 2015.
Credit: Arnd Wiegmann
Share

As Denmark faces a barrage of criticism over its controversial plan to seize refugees' valuables, Switzerland has already been doing so for years, Swiss authorities said Friday.

Swiss asylum law has since the 1990s required asylum seekers to contribute to the costs of hosting them in the wealthy Alpine country.

The country is permitted to confiscate from people seeking asylum in the country amounts over 1,000 Swiss francs ($995, 913 euros), Celine Kohlprath, a spokeswoman for Swiss migration authorities, told AFP.

Her statement confirmed information revealed in a debate programme on the public SRF channel Thursday.

"This practice is based on the fact that Switzerland (wants) people arriving in Switzerland to contribute as far as possible to the costs of the asylum process and the social assistance provided," she wrote in an email.

An information notice given to asylum seekers on arrival was displayed on Thursday's "10 vor 10" debate programme, stating: "If you have ... more than 1,000 Swiss francs when you arrive at the reception centre, you must hand them over against a receipt."

Kohlprath stressed that "in practice, the person must have at least 1,500 Swiss francs in their pocket" before any cash is confiscated.

The Swiss law also differs from the bill being debated by the Danish parliament in that it does not allow for material goods to be taken, she said.

The Danish proposal would allow Danish authorities to seize asylum seekers' cash exceeding 10,000 kroner (1,340 euros, $1,450), as well as any individual items valued at more than 10,000 kroner.

Kohlprath's colleague Lea Wertheimer also told Thursday's programme that "if a person leaves of their own accord within seven months, they can retrieve their money and take it with them."

A Syrian refugee invited to speak on the programme meanwhile showed a receipt he allegedly received from Swiss authorities in exchange for the money he had left over after paying off traffickers to get him and his family to Switzerland.

The married father of three insisted the law was "unfair".

Swiss law also requires refugees permitted to reside and work in the country to hand over 10 percent of their earnings over a 10-year-period, or up to 15,000 Swiss francs in total, to help cover the costs of their asylum process.

Stefan Frey of the Swiss Refugee Council lashed out against the measure, telling Thursday's programme it was "disgraceful".

The UN refugee agency, which has condemned the bill being debated by the Danish parliament cautioning it will fuel xenophobia, meanwhile said Friday it had previously raised concerns about the Swiss law with authorities.

"UNHCR has drawn attention to the fact that, having to contribute a part of their salary, could be an obstacle to accessing the labour market and to the integration of asylum seekers and persons with recognised protection needs," spokesman William Spindler told AFP in an email.

"There is a new legislative proposal to abolish this provision and we would very much hope it will be adopted."