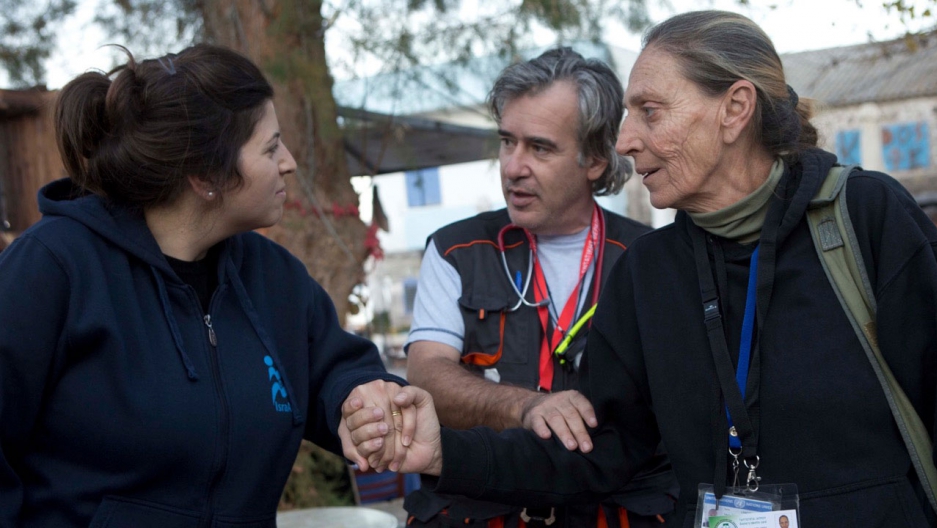 The first time I met Dr. Zoi Livaditou she had just finished examining a busload of Syrian refugees who had been rescued by the Greek Coast Guard.

It was a cool evening in fall at the port of Mytilene, the capital of the Greek island of Lesbos, and Livaditou was dressed in cargo pants and a heavy fleece jacket with a stethoscope dangling around her neck. The refugees in the bus were wet and cold, she told me, puffing on her cigarette, but fortunately everyone was OK.

I had wanted to talk to Livaditou for weeks now. A Lesbos native, she was a highly regarded emergency medicine doctor who had spent her career in war and disaster zones in places like Afghanistan, Gaza and Haiti.

Now the emergency had arrived in her home — in the form of the massive refugee crisis. In 2015, more than half a million refugees arrived on the island of 86,000 residents. 2015 was also the fifth year of a severe economic downturn in Greece that had eroded the island’s healthcare system and social network. Livaditou was dealing with both situations.

But getting time with her hadn’t been easy. Not only was she incredibly busy, she didn’t like journalists or photographers around when she was working, especially if children were involved.

“I change them, I give first aid, we play,” she told me. “Nobody is there. That is the right way.”

Around 25 percent of the refugees coming through Lesbos were children and Livaditou agonized over their situation. “What can I say to these children?” she said, gesturing toward the many kids on the bus. “That now you are safe and can easily go on to Europe? I cannot say lies to the children. Because they understand.”

When she examines children, she tries to make them smile with one of the many toys she keeps in a storage container at the coast guard facility. But many confess to her that they want to go home. She doesn’t know what to say to them because most have no home to return to. So she tries to comfort them by playing make-believe.

“We fix a home here. We don’t like it — we change. We put trees, we put flowers,” she said. “And then we make a fantastic house just how we want it to be.”

Livaditou has been working nonstop for many months. Even with the arrival of medical teams from other parts of Greece and around the world, there are never enough personnel to handle the daily emergency of thousands of refugees crossing the Aegean from Turkey in unsafe dinghies and boats.

The vast smuggling operation has put billions of dollars into the pockets of criminals — but it’s currently the only option the people fleeing war in Syria and elsewhere have to try to seek asylum in Europe. And they just keep coming.

For Livaditou, it’s an infuriating catch-22. To help the refugees is also to help the smugglers, whom she loathes. But “when you play with human lives, there is no other choice,” she said.

Sometimes even the comfort she and others try to offer the refugees on Lesbos, their first toehold in the European Union, can make her feel uneasy.

“I feel guilty sometimes because we give hope," she said. "But is it a real hope? I don’t know.”

The bus turned to leave the coast guard area to take the passengers to a nearby refugee camp and Livaditou went back to work.

Fighting for her name

Livaditou knew from childhood that she wanted to be a doctor. Born on Lesbos to parents who both came to the island as refugees fleeing Turkey after the Greeks lost the Greco-Turkish War in 1922, she went on to specialize in emergency medicine and to work around the world with Doctors Without Borders and the Hellenic Rescue Team, which she founded in 1998.

Now on Lesbos, she works for the International Organization on Migration, offers medical support to the Greek Coast Guard and helps the local community through the Medical Association of Lesbos and a Greek NGO called The Smile of the Child.

She joked her passion for medicine may have been predetermined by her first name, Zoi, which in Greek means “life.” She said she had “to fight for my name.”

One of her main concerns these days is fighting for the well-being of the local population on Lesbos. After five years of economic crisis, poverty is on the rise and the social service network has been degraded.

Healthcare has been especially hard hit. The island’s one hospital is in need of upgrading; there is a shortage of doctors and nurses; there are only four ambulances to cover the entire island; and basics such as vaccines are no longer funded. It irritates Livaditou that the needs of the locals are sometimes overlooked by outside groups helping the refugees.

“Because our children have a very difficult life, too,” she said.

To keep the balance she helps spearhead programs through the Medical Association of Lesbos to distribute food, clothing and medicines and offer healthcare to Greek families in need. During the Christmas holiday she joins with volunteers who organize a “convoy of love” to give presents to needy children.

Although Livaditou has worked with large organizations such as the UNHCR and Doctors Without Borders, she is critical of their more corporate approach to aid with high-salaried employees and spending she says doesn’t benefit local communities.

So she tries, however she can, to bolster the local economy. Anyone wishing to donate to the work of the Medical Association of Lesbos with refugees and local healthcare initiatives, for example, can put money into an account at several local pharmacies that draw on the funds to buy the supplies that Livaditou and others need.

In addition to her expertise in rescue medicine, she knows the sailors and the boats and can handle herself on board in the rough seas and winds that often batter the region. “Every boat going out is like my house,” she told me.

The raw power of the sea and nature is keenly felt on Lesbos. Growing up there, Livaditou said she learned to draw on this power as a healer. “I speak with the sea, with the stars, with the trees, with the rocks, everything,” she said. “Maybe you think I’m crazy. But sometimes somebody hears me.”

'I cannot cry any more'

I ran into Livaditou again on a chaotic night in the port of Molyvos in the north of Lesbos. Word had spread that a large trawler filled with some 300 refugees had gone down in stormy seas and rescue personnel and volunteers had converged on the port to help. People who had been rescued huddled under foil emergency blankets trying to keep warm, many with their heads in their hands, sobbing over the fates of their loved ones, still trapped in the sinking boat.

After staying up late the previous night to treat 62 refugees who had been rescued by a Norwegian Frontex boat, Livaditou was now out on a search and rescue mission with the coast guard.

The weather was bad and many refugee boats were in trouble, including the ill-fated trawler. It was an all-hands emergency — besides the coast guard, European Union Frontex boats, local fisherman and international rescue crews were all in action.

“I didn’t sleep at all last night,” Livaditou said as she grabbed my hands and placed them on her head. “I went for one hour to take a bath and then they called me again. Feel. My hair is still wet.”

She updated me on what was happening: Dozens of people were stuck inside the trawler and were probably dead.

“I cannot cry anymore,” she said. “I am just becoming crazy.”

By the time I saw Livaditou again at the cafe across from the coast guard facility in Mytilene some days later, the final death toll from that night was in: More than 60 people had lost their lives.

It had been impossible to retrieve all of the bodies from the sunken boat in the storm, so the corpses had washed up on beaches around the island. Both the morgue and cemetery were beyond capacity.

I asked her how she was holding up.

It wasn’t easy, even for Livaditou, who has worked in many war zones around even more death. But over her long career, she has taught herself to cope.

“If you feel bad, go back, prepare yourself, and then go on,” she said. “This is the trick. This is the real training.”