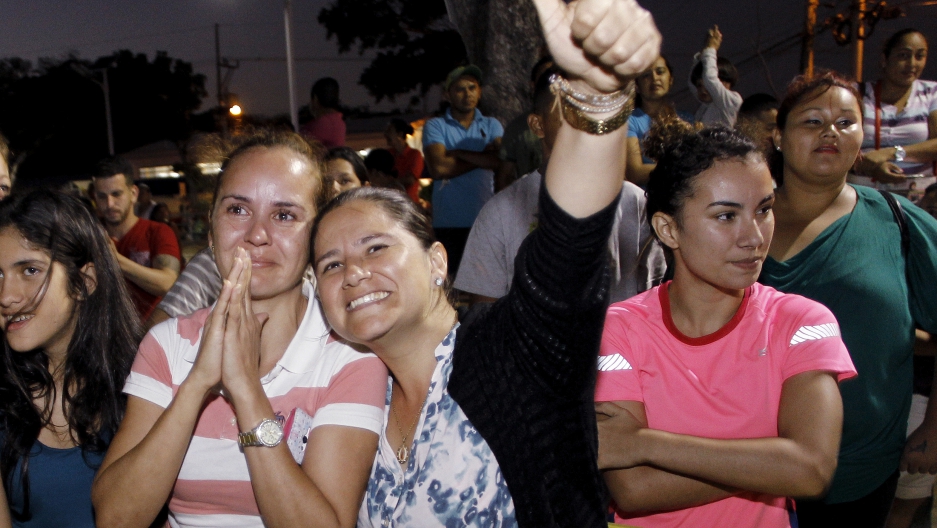 Cuban migrants say goodbye to their fellow compatriots in Costa Rica as they head to the airport for the first leg of their journey: a flight to El Salvador. Then they'll take a bus to the Guatemala-Mexico border and make their way to the US border.
Credit:

Four busloads of Cuban migrants entered Mexico on Thursday under a plan brokered by five Central American nations, Mexico and the International Organization for Migration (IOM) to get nearly 8,000 Cubans stranded in Costa Rica to the US. Mexican authorities have issued the Cubans 20-day visas to make their way to the US border.

Former INS Commissioner Doris Meissner says the United States will welcome the Cuban migrants because of a policy dating back to the 1960s that allows entry to Cubans fleeing their Communist-ruled island. "It is certainly the case that Cubans have been the beneficiaries since the Castro revolution of a very special policy that applies only to Cubans and that has been in contrast with all other nationality groups."

On Tuesday, the first group of stranded Cuban migrants boarded a plane in Costa Rica and effectively leap-frogged over Nicaragua. Meissner says in recent years, Cuban migrants have opted for an initial flight to Ecuador followed by a land route to the United States. "We've seen more and more Cubans coming through Central America, but that requires getting through Nicaragua."

By January the hundreds of Cuban migrants had turned into thousands, creating a bottleneck and putting the burden on Costa Rica to care for the migrants. Then, finally, a deal to break the logjam. "It's unprecedented as far as I recall," says Meissner. "The US was not involved in this discussion. I don't have any idea what quiet back channel discussions might be taking place, but this is certainly not from a US standpoint a very positive development."

The US preference for Cuban migrants is controversial. Under the 1966 Cuban Adjustment Act, once Cubans reach the US border and prove that they're Cuban, they are allowed in with an automatic pathway to permanent residency. None of those benefits are available to Salvadorans or Hondurans who risk thuggish human traffickers, dangerous desert crossings and once they enter the Unites States, the risk of deportation.

As if on cue, Secretary of State John Kerry announced on Wednesday that the UN High Commissioner for Refugees will now conduct initial screenings in Central America to determine whether people from Honduras, El Salvador and Guatemala qualify for refugee status. Meanwhile, Meissner says US immigraton law's preference for Cubans presents a blatant double standard. "It is a function of the Cold War. It is based on the assumption that Cubans are persecuted in their country and therefore deserve protection in the United States."

Meissner says those things were true at one time, but they definitely have changed since the Obama Administration re-established relations with Havana. "This is a big discussion that has to take place, a new negotiation. Cubans of course know that this is likely to change and so they are in much larger numbers making last ditch efforts to get to the US while it's still possible."