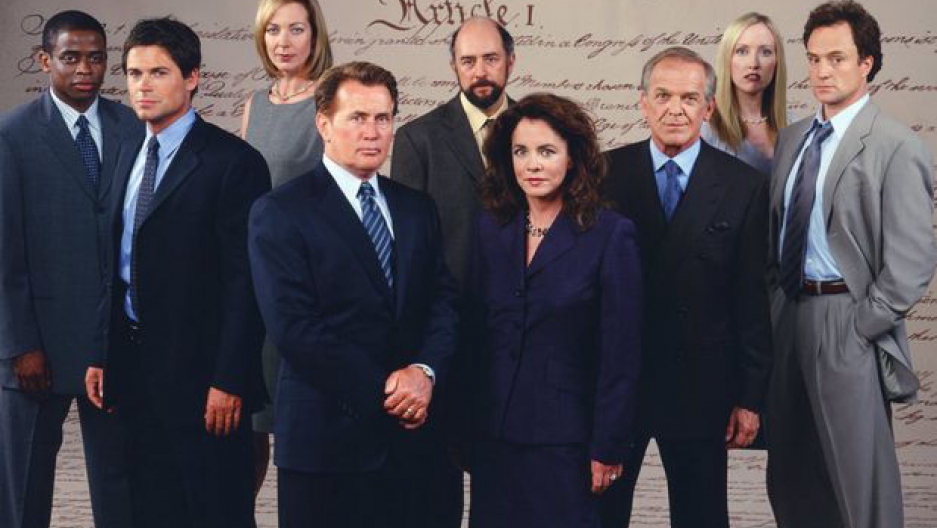 The cast of the hit show The West Wing. Toby Ziegler, played by actor Richard Schiff, is pictured fifth from left.

At its peak, Aaron Sorkin's television drama "The West Wing" was a top 10 show with more than 17 million viewers. On air from 1999 to 2006, the program gave Americans a window — albeit a fictional one — into life in the White House’s West Wing.

Nearly a decade since the series finale aired, the show remains popular. There's a hardcore superfan base, many of the main characters have active Twitter accounts (a platform that didn't exist when the show was on the air), and a number of books and essays have been written about the drama.

Character Toby Ziegler, played by actor Richard Schiff, was the White House communications director for fictional Democratic President Josiah Bartlet. In “The West Wing,” Toby was the man responsible for carefully crafting the president's speeches. He agonized over word choice, and for the State of the Union, fought with cabinet members on what should and shouldn't be included.

“We were so close to the real deal on ‘The West Wing’ because we had consultants who had lived and worked it,” Schiff says. “From Lawrence O’Donnell to Eli Attie, who was in the White House, and Dee Dee Meyers, who was the press secretary — I think Aaron and the writing staff had direct access to real stories.”

On Tuesday, President Obama delivered his final State of the Union address. What would Toby Ziegler make of it? Schiff, like many others, says it appears life is imitating art.

On January 16, 2002, “The West Wing” episode “100,000 Airplanes” aired. Fictional President Bartlet considers using his State of the Union address to call for an end to cancer by 2012. On Tuesday night, President Barack Obama actually did.

“Last year, Vice President Biden said that with a new moonshot, America can cure cancer,” Obama told the nation. “Last month, he worked with this Congress to give scientists at the National Institutes of Health the strongest resources they’ve had in over a decade. Tonight, I’m announcing a new national effort to get it done.”

“I saw that reference to ‘The West Wing’ with all the tweets last night,” says Schiff. “That reminded me of our episode about the same thing.”

The parallels don’t stop there. In fact, “The West Wing” character Congressman Matt Santos, played by actor Jimmy Smits, was actually inspired by Obama, then a state senator in Illinois.

“We had all been in Boston listening to [Obama’s] speech in 2004," Schiff says. "[In] coming up to the next presidential election in ‘The West Wing,’ Eli Attie called David Axlerod and said, ‘Tell me about this kid from Chicago.’ Our version of that turned into Santos.”

In the show, Santos ran for president against the character of “Arnold Vinick,” a fictional Republican senator portrayed by actor Alan Alda — a character that was based off of US Senator John McCain, the man who ran against President Obama in 2008.

“If you go back and look at those debates that we did live on ‘The West Wing,’ they’re very similar to the debates that later happened between Obama and McCain,” Schiff says.

Even though “The West Wing” is fictional, Schiff argues that program’s legacy is incredibly complex.

“What I find interesting is that when people remember the Bartlet Administration as one of great accomplishment, I as Toby, playing Toby, didn’t feel that at all — maybe I was getting too close to my character,” he says. “I remember once pitching to Aaron Sorkin that Toby was very unsatisfied with what our legacy was going to be. I pitched a speech between Toby and Leo [McGarry] in the portico, which was basically, ‘Where is our great society? Where is our New Deal? We haven’t accomplished anything except for putting a Hispanic in the Supreme Court.’”

Though Schiff is also a Democratic activist, he says he doesn't participate enough in the American political system.

“I get so bored with the vitriol and the Trumpism that I just get debilitated by it,” he says. “Obama’s reprimand to the everyday American citizen to keep participating and not let that vitriol be defeating to us, I thought that was remarkable.”