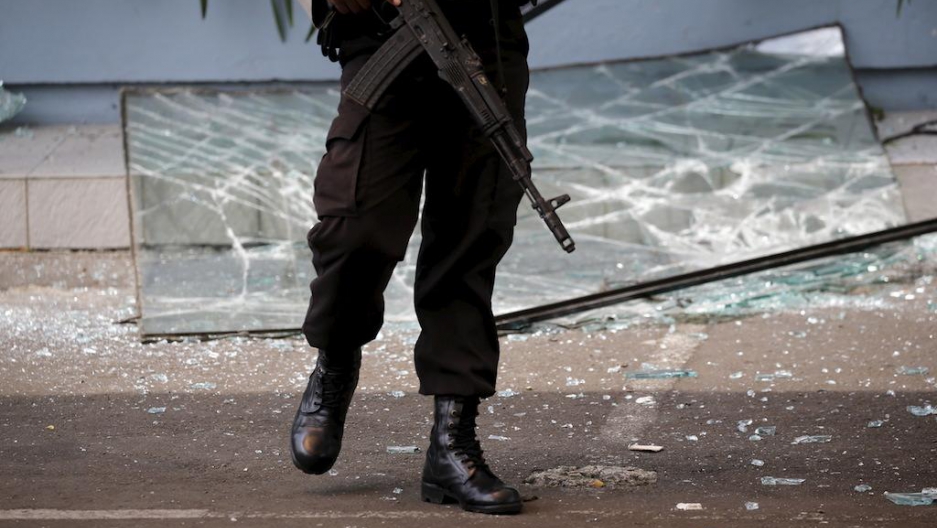 An Indonesian policeman near a broken window from a Starbucks outlet in Jakarta, Jan. 14.

Is ISIS linked to the terrorist strike in Indonesia’s capital that left an estimated seven dead in a wave of bullets and explosives?

The answer is still murky. The group claimed responsibility through its semiofficial news agency. And the Indonesian police concede that they recently received specific threats from the world’s deadliest terrorist group. According to the Associated Press, police believe the gunmen were imitating recent terror attacks in Paris.

But there's been no official confirmation. ISIS sometimes claims responsibility for attacks even when they weren't actually involved. What is clear is that the attackers were sloppy and showed little indication of formal training by a force with ISIS' demonstrated skills.

The attacks began Thursday morning near a main thoroughfare in central Jakarta. Nearby was a United Nations building and a popular shopping center with a a Starbucks and Burger King. A small police kiosk may also have been a target. A death toll published by multiple outlets suggests that the incident left seven dead — including at least four or five assailants. Those figures, if accurate, would mean that dead terrorists are more numerous than their victims.

ISIS has no known formalized wing operating inside Indonesia. Indonesia is the world’s largest Muslim-majority nation, but has proven an exceptionally poor recruiting pool for the group.

There are more than 200 million Muslims in Indonesia. But officials say that a mere 800 of them have traveled abroad to fight in Syria. That’s less than half the number of ISIS fighters originating from France. Pew Research Center polls indicate that the overwhelming majority of Indonesians can’t stand ISIS.

The total number of Indonesian fighting-age males that have joined ISIS is probably only 160, according to Sidney Jones, the director of the Institute for Policy Analysis of Conflict in Jakarta and an expert on Indonesian terror groups. “And many of them,” she said, “complain they’ve been given menial jobs and haven’t been sent to the front.”

“The jihadi groups still active in Indonesia are focused more on getting to Syria than on undertaking any action,” Jones wrote in a recent analysis. “And anyway, they are poorly trained, poorly led and largely incompetent.”

But Indonesia, like parts of Europe and the United States, does have a worrying sliver of ISIS fanboys and wannabes. As attacks from San Bernardino to Paris indicate, even small numbers of people seduced by the group's spell can shed a lot of blood. Worse yet, those radicalized online are often difficult to detect. 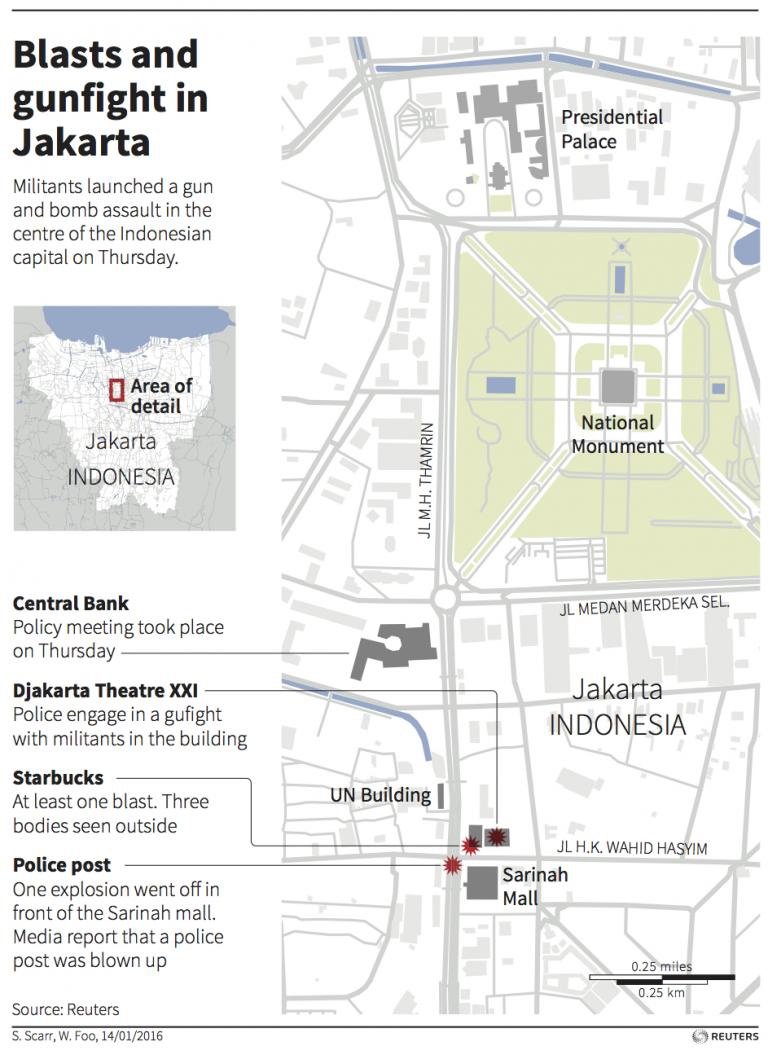 In December police in Indonesia, acting with the help of American intelligence, staged raids and arrests to break up a terror network that was “inspired” by ISIS. Some reports suggest this network has collaborated with Indonesians who’ve fought alongside the terrorist organization in Syria.

The Jakarta attacks also happened to transpire in the wake of an al-Qaeda declaration that Southeast Asia is “ripe for a jihadist revival,” according to The Long War Journal.

Though al-Qaeda’s appeal among Islamic radicals is no match for ISIS' slick online propaganda machine, al-Qaeda does have a deeper history in Indonesia. In 2002, the group helped finance nightclub bombings in Bali — an attack that killed 202 people. It remains the nation’s most lethal terror attack in history.

Though homegrown terrorist groups might pay homage to the Islamic State or Al Qaeda, many are primarily obsessed with transforming Indonesia into a more orthodox state with Saudi Arabia-style fundamentalist leanings. Nowhere does this vision seem more absurd than in Jakarta on Saturday nights, when beer flows, dance clubs throb and young men and women freely intermingle.

Though their motives are unknown, Thursday's attackers failed to impress. On Twitter, one Indonesia-based security analyst and lecturer, Yohanes Sulaiman, assessed their skills bluntly: “I have to say that this is a dumb terrorist group.”