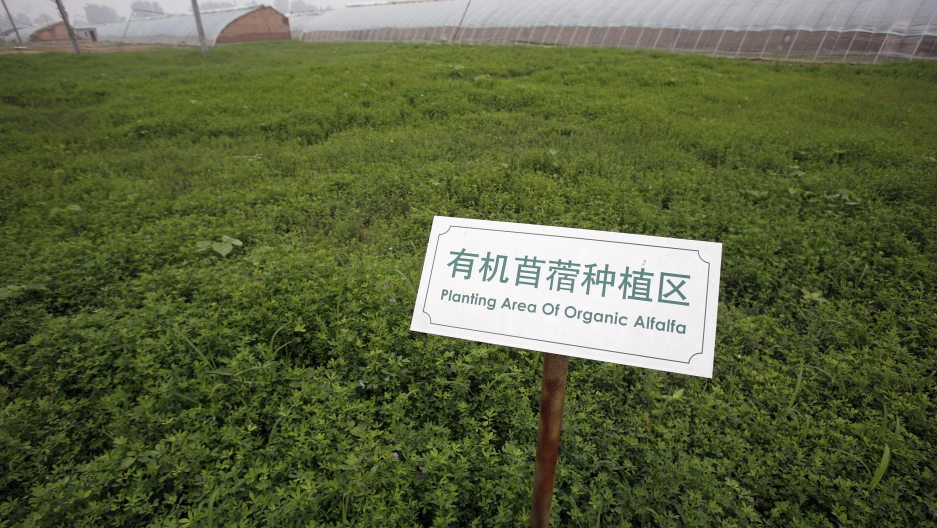 A sign can be seen indicating an area for growing organic alfalfa in front of greenhouses at an organic farm located on the outskirts of Beijing June 20, 2008.

Roger Deal is trying to figure out how plants remember drought.

An assistant professor of biochemistry and genetics at Emory University, Deal says most plants have a kind of memory for stress. When experiencing water shortage, for example, plants close the holes in their leaves, called stomata, to reduce water loss from their tissues. This in turn slows photosynthesis and plant growth. If the plants recover and go through a similar situation again, their cells somehow recall what that stress was like, so they’re able to bounce back more rapidly.

Deal is focusing his attention on a close relative of alfalfa, Medicago truncatula, which seems to have a better memory than most. For some reason, Medicago is able to turn off its stress response much faster after drought eases — in a matter of hours versus days. As a result, it can recover more quickly and begin growing again as soon as better conditions arrive.

Deal wants to know more because he figures if he can pinpoint the genetic material that controls this capacity, he might be able to find a way to switch it on in similar plants where it might be present but dormant. This would allow crops to get by with less water.

Deal is not the only one with an eye to applying genetic engineering to helping crops thrive in tomorrow’s warmer climate. Around the world, researchers are working to create genetically modified crop varieties that can withstand severe drought, expected more often with climate change, or thrive on arid lands now considered unsuitable for farming.

One crop genetically engineered for drought tolerance is already on the market in the United States: a corn variety called DroughtGard, created by Monsanto. Approved by the US Department of Agriculture in 2011, DroughtGard includes a protein from the bacterium Bacillus subtilis that Monsanto says will help the corn remain productive amid water shortages. DroughtGard has also been certified for sale in several other countries, including Australia, Canada, Mexico and Japan.

The market response to DroughtGard has been slow so far: In 2014, about 500,000 acres in the US were planted with DroughtGard corn, representing about 0.5 percent of the nation’s corn crop. And results have been mixed.

Another crop at the forefront of this new arena of GMO research is soybeans. In October, Argentina approved the use of a soybean genetically modified to withstand drought. Developed by Deborah Chan, a biochemist at the National University of Litoral in Santa Fe, Argentina, the new variety contains a gene from a naturally drought-resistant sunflower.

It’s too early to know how the soybean will perform in real-world use. But if its developers’ claims that the modified soybean increases yields 14 percent under drought conditions and also withstands saline soils prove true, the potential impact could be enormous: Soybeans are the world’s fourth-largest crop by calories produced, the second-largest source of vegetable oil and the largest source of livestock protein feed.

The Argentine firm Bioceres licensed the soybean and is in a joint venture with the US company Arcadia Biosciences, based in Davis, California, to market the new soybean. It has gone through field trials in the United States and Argentina, but has not been approved for sale in the US yet. The partners are negotiating to sell the seed in China, the world’s largest importer of soybeans.

Peggy Lemaux, a cooperative extension specialist in biotechnology at the University of California, Berkeley, is lead researcher on another project aimed at engineering drought resistance into crops — in this case, sorghum. Her goal is to discover how epigenetics, the process by which environmental change triggers new genetic functions, could be altered to improve drought tolerance. If she and her colleagues can figure this out for sorghum, it could be applied to other species such as tomatoes and rice, also part of Lemaux’s research, through genetic engineering or by inducing mutations using radiation or chemicals.

At the University of Cape Town in South Africa, researchers are studying Myrothamnus flabellifolius, a so-called “resurrection” plant that can bounce back from total water deprivation. Through genetic modification, they hope to bring this quality to teff, an important native African grain that is high in protein. Scientists at Technion–Israel Institute of Technology and the University of California, Davis, accomplished something similar with tobacco, while also extending its growing season.

The modification has been adapted to rice, wheat, sugar beets and several other major crops.

At Oak Ridge National Laboratory in Tennessee, staff scientist Xiaohan Yang is trying to discern the genetics behind a kind of photosynthesis that’s different from that used by most common crops. His subject? Agave, the hardy desert succulent that is the basis of tequila.

Most plants use types of photosynthesis known as C3 or C4, in which they open their stomata during the day to take in carbon dioxide. Agave uses a different kind of photosynthesis, called crassulacean acid metabolism, or CAM. The plant opens its stomata at night to absorb carbon dioxide, when temperatures are cooler, then stores the carbon in a temporary pool of malic acid, thereby losing less water to transpiration. When the sun comes up, agave releases the stored carbon to complete photosynthesis without opening its stomata.

As a result, CAM plants survive on as little as one-fifth as much water as C3 and C4 plants.

Yang intends to map out the entire genetic pathway of CAM photosynthesis, then figure out a way to genetically empower C3 plants to adopt it. Ideally, he says, this modification won’t require adding any new genes at all, but merely giving existing genes in the plant a new assignment.

“It’s ambitious, but we think it’s feasible in principle,” says Yang. “We’re not introducing a totally different thing, for example, to increase insect resistance. We’re just trying to change the opening and closing (of the stomata) to a different time period.”

Yang makes this sound simple. But his proposal is like asking the human heart and lungs to operate at different times instead of simultaneously. To ease the complications, Yang recently published an article to describe additional research needs for other scientists.

If Yang succeeds, millions of acres of desert now unsuitable for growing food could become productive farmland using crops that function like agave.

“I’ve been talking about this with my colleagues, my friends and other scientists,” Yang says. “They feel excited about this, because it’s apparent the world is facing demanding challenges.”

Many familiar concerns voiced about genetic engineering could equally apply to plants modified for drought resistance — for example, that their genetic alterations could cross with other species and upset ecosystems or that they could cause farmers to become more dependent on corporations for their seed stock.

Doug Gurian-Sherman, a senior scientist at the Center for Food Safety, worries the focus on genetic engineering takes attention and funding away from other solutions — and their ancillary benefits. A recent article in the journal Nature, for example, reported that more than 150 corn hybrids produced by conventional crossbreeding methods to tolerate drought also increased crop yield as much as 30 percent.

“Genetic engineering is being pushed at the expense of other approaches in agriculture that we know work,” Gurian-Sherman says. “That has a real cost.”

On the other hand, if successful, the application of GMO technology to boosting drought resistance could be an important addition to the toolkit humans can use to adapt to climate change, which is expected to cause longer and more frequent droughts in many of the world’s important food-growing regions.

“We don’t have to talk about future climate change,” Lemaux says. “We can talk about it right now. Being able to understand those [genetic] mechanisms and to build those mechanisms into other vegetable and crop plants, I think, is something we have to do.”

Consumers will be able to decide for themselves in a decade or so, when these research efforts are expected to bear fruit.

This story was first published by our partners at Ensia, an environmental news magazine published at the University of Minnesota.