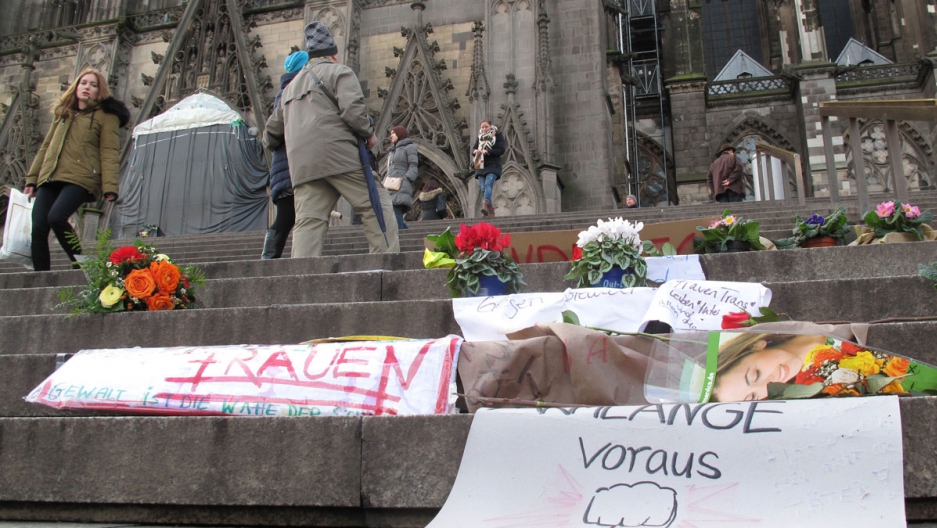 Flowers and handwritten signs for the sexual assault victims have been left on the steps of Cologne's Gothic cathedral. Hundreds of women reported being victimized in this area during a chaotic New Year's Eve.

Germany welcomed 1.1 million migrants in 2015, far more than any other European country.

But chaotic New Year’s Eve scenes in Cologne, Hamburg and other cities — with hundreds of young women reporting being groped, harassed and robbed by throngs of young men from the Middle East and North Africa — has increased tensions in an already sensitive debate over how many refugees the country can absorb.

Chancellor Angela Merkel has resisted setting an arbitrary cap, but this week the German government said it would speed up deportations of migrants caught breaking the law.

“I didn’t like the atmosphere there, because there were so many foreigners — young men,” said Dierk Stoetzel, owner of an antiquarian bookstore just around the corner from Cologne's main train station, the scene of some of the worst reported incidents. He says he didn’t see anyone being harassed, but he didn’t linger. “They were shooting the fireworks and this was a hell of a cloud from this burning stuff, you know. The air was too bad. So I decided to go back home.”

Authorities have been criticized for not having enough police on hand to protect the crowds. Cologne's police chief has stepped down and the police presence in the square has increased. Recently, riot police used tear gas and a water cannon to prevent a clash between Germany’s far-right Pegida movement and counter-demonstrators.

Pegida is largely considered a fringe political movement, but the German government is taking the public outcry seriously. This week, two ministers announced legislation to expedite deportations of migrants convicted of serious crimes, including sexual assault.

“Those guys who did this — they should be sent home, I think,” he said. “But you can’t generalize on any refugees. Most of them are peaceful people. Even in this crowd there were peaceful people, probably. But it was a group dynamic.”

There are concerns of a larger backlash. In the past year there have already been scores of arson attacks on refugee homes across Germany. On Sunday, four separate attacks on migrants of Middle Eastern and African origin were reported around Cologne’s train station.

“We will do everything we can to clearly show the limits to potential criminals and those who think they can take the law into their own hands,” Cologne police official Michael Temme told reporters.

But some who arrived here in the past year say they can already feel the atmosphere changing. Ahmad Alian, a 28-year-old lawyer from the Syrian city of Raqqa, arrived four months ago and is working odd jobs and borrowing money from friends and family to help support two younger brothers and a nephew who are in middle school.

"I’ve noticed a big difference, especially on trains, where people stare at me for two or three minutes in a very bad way,” Alian said. “It’s really hard when people stare in a bad way. It’s shocking.”

He’s now working to learn German, he says, not just so he can get a real job, but also to fit in better.

Alaa Houd, a 28-year-old from Damascus, arrived more than a year ago with his wife and toddler son. He’s also an observant Muslim, so he’s troubled by those who blame the New Year’s Eve mob behavior on his religion.

“When they say it’s Islam or this religion or this nationality or Arab or this, and in any culture you’ll find this is forbidden,” Houd said. “Put Islam aside, in any culture always the woman is a red line.”

Houd says he suspects some people are exploiting the New Year’s Eve attacks to drive an Islamophobic agenda. Not all of these refugees from the Middle East are even Muslim, he notes.

“Maybe when they catch the guy and they find he’s Christian and he’s an Arab they’ll say maybe he’s psycho or something like this,” Houd said. “But if they find out he’s a Muslim they’ll say it’s Islam — this is wrong.”

The government’s vow to deport criminal migrants is designed to win over a public uneasy about absorbing a million refugees and migrants. It also comes as right-wing politicians seek to chip away at Merkel’s centrist coalition government.

But the tone and timber of the debate has many fearing Germany has reached a tipping point.

“We’re coming to the point where we say it would be OK if nobody came anymore,” said Stoetzel, the bookseller. “We’re fine with the people who are here and they should have the right to stay here. It’s going to be a real problem if another million coming this year.”