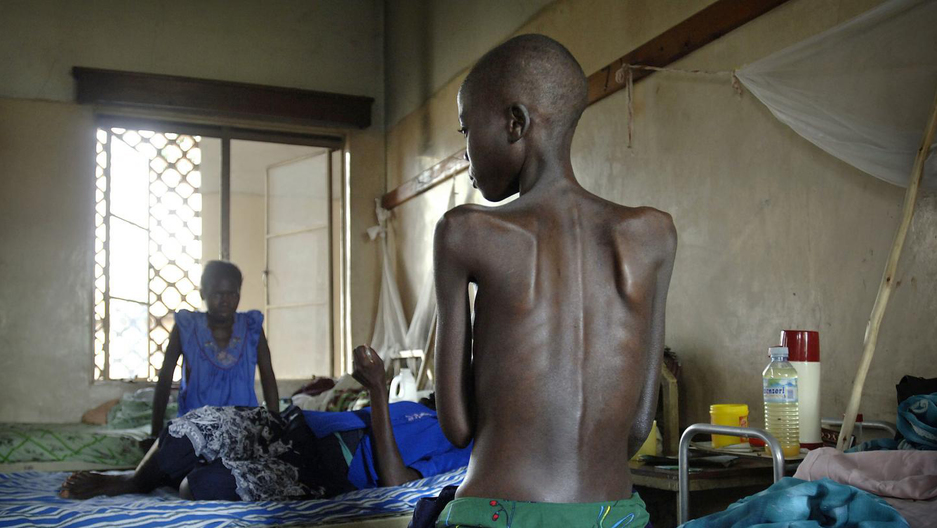 A patient sits in the isolation ward of the general hospital in Arua, Uganda, December 2005. Most patients in this ward are suffering from opportunistic infections and diseases related to HIV and AIDS.

For many Americans, Norman, Oklahoma, is famous as the home of a college football powerhouse, the Oklahoma Sooners. But to public health officials around the world, Norman may be better known for the work of a family-run company founded in a barn on the fringes of the city.

Immuno Mycologics, aka Immy, started out in the late ’70s with a modest goal: make simpler tools to diagnose fungal infections. It’s now one of the fastest-growing private companies in the nation, built entirely on unique diagnostics. One of its most important developments in recent years is a rapid test, the Cryptococcal Antigen Lateral Flow Assay, or CrAg LFA, which global health experts believe could be key to stopping one of the planet’s biggest killers: cryptococcal meningitis.

Crypto, a fungal infection of the brain and spinal cord, is a threat primarily to people living with HIV/AIDS. A so-called opportunistic infection, it preys on those who lack access to the antiretroviral therapy that can keep HIV in check.

Infection occurs when a person inhales the airborne spores of Cryptococcus, a fungus in soil around the world. A healthy person’s immune system can easily fight off the infection, but in someone whose immune system has been weakened, such as by HIV, the fungus often spreads from the lungs to other parts of the body—usually the meninges, the protective envelope surrounding the brain. There, it can impair the brain’s ability to reabsorb cerebrospinal fluid, producing a buildup within the skull.

The result: a headache so excruciating “you cannot eat, you cannot talk, you do not know where you are,” says Rose Sabina, a survivor from Uganda. “The head wants to burst. The pain is too much.” The only means of relief is a lumbar puncture, or spinal tap, a procedure often performed without anesthesia in poor countries where staff and supplies are stretched thin. And even where such care is available, most patients die.

In fact, according to the U.S. Centers for Disease Control and Prevention (CDC), cryptococcal meningitis kills nearly as many people in sub-Saharan Africa every year as tuberculosis —and more in a month, every month, than the worst Ebola outbreak on record. Globally, the disease claims up to 300,000 lives every year. Yet despite its outsize impact on human health, the disease has all but vanished from public view.

There is no day named for its awareness, no celebrity ambassador to champion its demise. The World Health Organization (WHO) team tasked with addressing cryptococcal meningitis is a team of one.

That’s also the number of times cryptococcal meningitis is mentioned in the 500-plus pages of the latest UNAIDS report.

Not since 2009 has it been mentioned in The New York Times.

“It just gets lumped with HIV, so no one sees it and no one really cares,” says David Boulware, a physician-scientist at the University of Minnesota. “Crypto is so neglected that it’s not even considered a ‘neglected disease,’” he adds, referring to the WHO classification for illnesses affecting only the poorest populations and thus of no commercial interest to pharmaceutical companies, resulting in a dearth of research and development.

“Neglected diseases” have in recent years benefited significantly from product development partnerships, or PDPs. With support from the Bill and Melinda Gates Foundation (the largest funder of PDPs), groups like PATH and the Drugs for Neglected Diseases Initiative have catalyzed new research and development for everything from African sleeping sickness to lymphatic filariasis.

When the TB Alliance was launched in 2000, no TB drugs were in clinical development. In the past 15 years, the organization has gotten tremendous financial support from the Gates Foundation to develop a faster cure for TB, and today it boasts “the largest portfolio of potential new TB drugs in history.”

For cryptococcal meningitis, however, little has changed.

The drugs recommended for first-line treatment, flucytosine and amphotericin B , are more than 60 years old, highly toxic and prohibitively expensive. Patients on amphotericin B must be closely monitored for renal failure, one of several potentially life-threatening side effects—so bad the drug is often referred to as “amphoterrible.” Despite that, amphotericin B is considered a luxury in many countries and is seldom available. Flucytosine has not been approved for importation, distribution and marketing by a single regulatory agency on the African continent.

Even fluconazole, an effective, if suboptimal, antifungal that went off patent more than a decade ago, is often in short supply there. 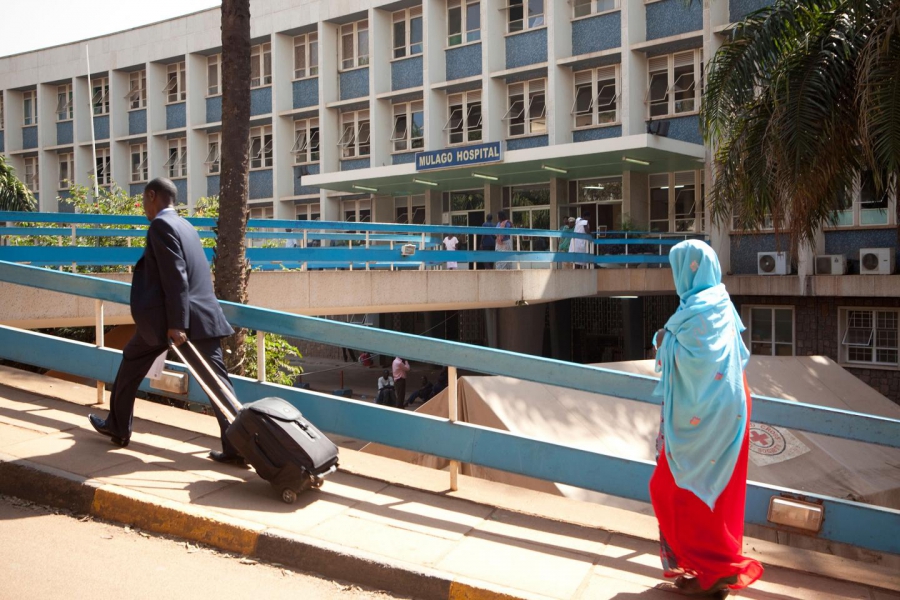 People walk past Mulago Hospital in Kampala, Uganda. At Mulago, patients in a research trial receive CrAg LFA, a screening that can detect the presence of cryptococcal meningitis, enabling the lethal disease to be cured before symptoms arise.

CrAg LFA could be the solution. It’s a simple premise: Catch the disease before you even need the awful, pricey and hard-to-find drugs.

The methods of diagnosis currently available to health care workers in the field rely on having access to major laboratory infrastructure, including a continuous supply of electricity and skilled technicians. The CrAg LFA, in contrast, is simple and easy to use, requires no cold chain or refrigeration, and it works with just a finger-prick of blood. Faster and more accurate than previous methods, and significantly less expensive, the test also allows for earlier diagnosis; the crypto antigen, which is highly predictive of the development of the disease, can be detected weeks to months in advance of the onset of symptoms, offering an opportunity, rare in public health, to treat patients before they become ill.

Shortly after CrAg LFA was developed, the WHO issued new guidelines recommending its use. But even with the WHO’s stamp of approval, uptake has been sluggish. When I arrived in Uganda in mid-September, the first shipment of 15,000 tests—a donation from Immy—was held up in customs, due to “bureaucratic inertia” and because it is a “nonpriority,” says Boulware. The shipment is still there.

The greatest hurdle to preventing deaths caused by cryptococcal meningitis may be the notion that nothing more need be done.

“Crypto is perceived as something that will simply go away,” says Tom Harrison, a professor of medicine at St. George’s Hospital in London and one of the world’s foremost experts on cryptococcal meningitis. “Donors think it’s a done deal.”

Of the some $2.5 billion in HIV grants Gates has given away, not a single dollar has gone toward cryptococcal meningitis. Moreover, according to experts, the foundation — which wields considerable influence over the global health agenda—has repeatedly rejected funding proposals for projects that would address the disease, including development of CrAg LFA and its rollout across sub-Saharan Africa. “They say, ‘It’s not in our strategy. We don’t see this as a problem,’” says Jeff Klausner, an HIV specialist at the University of California, Los Angeles, “and they just don’t get it.” A representative for the Gates Foundation declined to comment on the topic.

Klausner, a former chief of HIV/TB care and treatment for the CDC-South Africa, recalls a 2011 meeting in Johannesburg with CDC Director Tom Frieden, in which the two reviewed the country data on crypto and the role CrAg screening could play in controlling it: “He got it very quickly. He said this is going to be ‘one of our winnable battles.”

Weeks later, the CDC posted on its website a call to action: “By 2015, equip one half of all HIV clinics in Africa and Asia to perform Cryptococcus testing and treatment.” Doing so, the agency predicted, “could save 50,000 to 100,000 lives each year.”

Governments are gradually getting on board. So far, 16 countries in sub-Saharan Africa have included CrAg screening in their national guidelines, many with support from the Clinton Health Access Initiative, which recently began working with country ministries of health to develop screening strategies, strengthen supply chains and raise awareness of cryptococcal meningitis among health care workers.

Alisat Sadiq had never heard of the disease when she came to work several years ago as a counselor at Mulago Hospital in Kampala, the capital of Uganda. But upon seeing the patients—heads draped with wet cloths, eyes squinting in the light—she thought back to the many people in her home village who had gotten headaches and soon after gone “crazy.” Family members had tied them to their beds for fear they might wander away, and within weeks, she recalls, the wailing finally stopped.

“No one knew it was crypto,” she says. And anyway, there were no drugs then, “so everyone died.”

Today, Mulago is ground zero for research on CrAg LFA.

Thanks to CrAg screening, those diagnosed before they’ve developed symptoms are getting the treatment they need as part of the research trial. But the big question, says Boulware, is what will happen when the study ends and the burden of funding falls to the government. “It’s one thing for countries to include screening in the guidelines,” he says. “But there are a lot of recommended guidelines that never actually get implemented, especially when there’s no donor money to support it.”

Which might be why, as 2016 begins, few countries have made significant headway, and only one, Rwanda, has rolled out screening at the national level. “I think it’s shameful,” says Klausner. “People know crypto as a cause of death in AIDS patients. But people expect AIDS patients to die.” And so, prostrate to fatalism, they have given up the fight against this deadly disease.

This reporting was supported by the Pulitzer Center on Crisis Reporting, and is crossposted with permission from Newsweek.