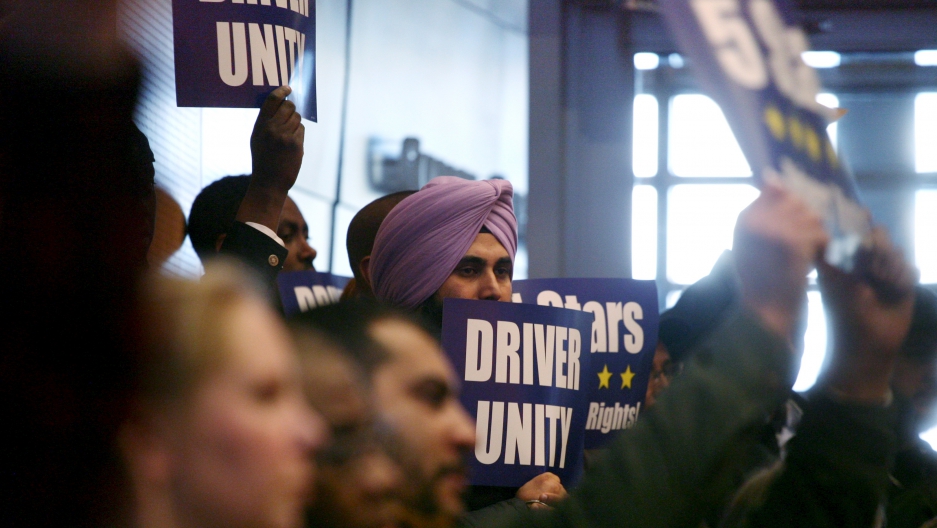 Supporters of ride share unionization are seen cheering at a December meeting when the Seattle City Council voted to approve a measure that would allow ride sharing drivers for Uber and Lyft to unionize in Seattle, Washington.

Takele Gobena left Ethiopia in December 2009 in hopes of finding better education and job opportunities in the United States. He settled in Seattle where his only US relative, a niece, had lived for many years.

Nearly six years later, he is a senior at the University of Washington where he studies business. After he graduates in June, Gobena plans to apply to graduate school to study public policy. His goal: to advocate for workers’ rights.

Because in addition to attending classes as a full-time student, Gobena drives as many as 55 hours a week for Uber, an app-based ride-hailing service. He recently took his first break from driving for Uber in two years, but it wasn’t much of a rest. Instead, he spent the two days finishing a research paper and taking his final exams.

That could all be changing now for Gobena and many other Seattle Uber drivers who, Uber has said in the past, are mostly immigrants.

Seattle City Council members unanimously approved a measure on Dec. 14 to allow Uber drivers to form unions. The measure would allow drivers for taxi, for-hire, and transportation network companies — the city council’s official term for app-based ride services like Uber and Lyft — to negotiate anything from pay rate increases to health care benefits. The agreement will become law without signature from Seattle Mayor Ed Murray, who believes the legislation requires additional clarification.

This is a big deal for immigrant drivers, who can’t all put themselves through college like Gobena. According to a report from the Pew Charitable Trust, education disparities between immigrants and US natives affect how they compete in the job market. Immigrants “are disproportionately employed in low-skill industries, such as accommodations and food services, and in high-skill industries, such as information and high-tech manufacturing,” the report explains.

As a result, companies like Uber, which advertises pay rates of up to $35 an hour, become attractive options for immigrants struggling to find a source of income. Thanks to the new Seattle measure, long-suffering drivers may finally have some peace of mind.

“With a union, I’m going to have a voice,” says Gobena. “It’s so important to have a union and to be part of a union. … There’s better treatment, which isn’t measured in terms of money.”

For many Uber drivers, better treatment means finally having the right to a two-way conversation with their multibillion-dollar employer, the right to negotiate for something as simple and vital as healthcare benefits. Other negotiations might include wages, sick leave, and workplace treatment. For Gobena, it could also mean cutting down his hectic driving schedule to spend more time with his wife and almost 2-year-old daughter.

Drivers could join a union if they complete a to-be-determined minimum threshold of trips and pay $25 to $35 in monthly dues. It would ultimately be up to drivers whether they will create separate Lyft and Uber unions or form one large union with traditional cab drivers, says Leonard Smith, director of organizing and strategic campaigns for Teamsters Local 117.

The Teamsters, which also runs the Western Washington Taxi Cab Operators Association, advocates for the rights of more traditional driving groups including taxi and for-hire drivers. But since the relationship between Uber and its drivers soured, the organization has been working with the drivers to help them speak out.

Before reports about the company slashing fares—and, in turn, drivers’ wages—rose to the surface, Uber mobilized its drivers and customers to strike down city council proposals that would impose regulations on the emerging industry. “What they’d like is silent partners with no rights,” Smith says.

At present, its partners include drivers who are hustling to find ways to scrape by. Papa Diawara, another Seattle Uber driver, lost his savings working for Uber.

Before leaving Mali in 2003, Diawara worked odd jobs to feed his two teenage children, brother, and sister. He came to the United States with hopes of earning enough money to provide a better life for the family he left behind. He ended up in Seattle where he and a friend secured jobs as seasonal fishermen. During his 11 years on fishing boats, Diawara earned a steady income and even had health insurance. But when another friend told him he could be making more money driving for Uber, Diawara got off the boat.

In the year he’s been driving for Uber, Diawara has averaged 10—and sometimes driven as many as 19—hours a day, yet his wages plummeted from $1,800 a week to about $800. “It’s hard to make money driving now,” he says. “I don’t know how new drivers can afford to make [car] payments.” Diawara’s own car payments are $500 a month.

Additionally, Diawara lost his health insurance when he quit his fishing job, so a routine checkup at a walk-in clinic has to come from his pocket. He’s not alone: one-third of US immigrants are uninsured. Diawara says he feels spread thin.

This is where unions could help. Although drivers who join a union will not see an immediate jump in their earnings, their newfound ability to negotiate can change that.

Today, Gobena is disenchanted with the company. By the end of his first year driving in 2014, he realized he was making only $2.67 an hour (about $200 a week) after taking out Uber’s per-ride commission, gas, car maintenance, insurance, and car payments. Gobena, whose paycheck supports his family, was devastated.

Smith at the Teamsters union says that feeling is shared among drivers. After all, it’s easier for Uber to operate without its drivers having a say in business operations. Uber’s vaunted flexibility works more in favor of the company than its drivers, says Smith.

Many drivers are hopeful that the city council’s vote will be a turning point in their lives—whether that means being able to put away savings for retirement, taking a breather from long days of work and school, or knowing they’re being paid a fair wage.

But at the end of the day, these drivers and the organizers lobbying for them realize they must remain realistic. Smith and City Councilmember Mike O’Brien, a major supporter of the city ordinance, anticipate legal challenges to Uber unionization.

In the meantime, Smith and the Teamsters remain optimistic. They’re celebrating the victory at City Hall by fielding calls and emails from Uber drivers across the country. Now that Seattle has set a precedent for legalizing unions, drivers everywhere from Minneapolis to Southern California are hopeful that their city will be next.