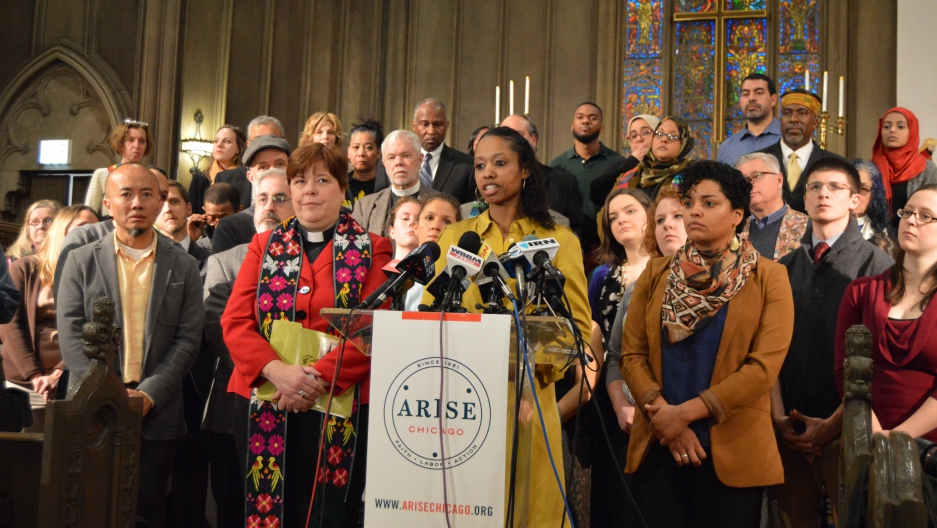 Prof. Larycia Hawkins told a news conference on January 6, "Wheaton College cannot scare me into walking away from the truth that all humans, Muslims, the vulnerable, the oppressed, are all my sisters and brothers."

Larycia Hawkins urges her students to reach beyond academics by living out their beliefs in the real world. Now, she might lose her job for practicing what she preaches in the classroom.

Hawkins is a 43-year-old political science professor at Wheaton College in Illinois (not to be confused with the Wheaton College in Norton, MA). She has been teaching at the private evangelical Christian school for nine years and she has academic tenure.

But the Wheaton administration put Hawkins on academic leave last month after she made some comments on Facebook about the importance of showing solidarity with Muslims. In her post on December 10, there is a picture of Hawkins wearing a Muslim headscarf.

“I stand in religious solidarity with Muslims because they, like me, a Christian, are people of the book. And as Pope Francis stated last week, we worship the same God.”

As an evangelical Christian, Hawkins says putting her faith to work in the world is about showing support for the oppressed and the vulnerable. In today’s political atmosphere in America, that means reaching out to Muslims.

Hawkins says she’s been troubled by the amount of anti-Muslim fear mongering flying around America these days, especially the stuff coming from high-profile political personalities.

“Many of the great lessons, the deepest lessons, in life, are forged in the most painful moments — in the valley of tears,” she tells me over Skype.

“That’s what [wearing the hijab] was intended to be, walking with my Muslim sisters in the United States and certainly throughout the world who are oppressed simply on the basis of their religious commitment, their faithful devotion.”

But the administration at Wheaton College apparently feels Hawkins went too far.

On December 15, the office of the provost sent Hawkins a letter, saying that her comments about Muslims raised questions about her commitment to the statement of Christian faith that all of Wheaton’s professors have to sign to work there.

In a statement on the Wheaton website, the college says it takes its statement of faith seriously. Part of the statement reads that, “the Lord Jesus Christ died for our sins, …[and] that salvation is through Christ alone.”

Wheaton has placed Hawkins on academic leave and says it is examining the theological implications of her public comments to determine whether she will be dismissed from the college.

No one from the administration would speak with me before publishing this story, but Wheaton's director of media relations LaTonya Taylor sent an email on Wednesday. Taylor wrote that Hawkins is not in jeopardy of losing her job for reaching out to Muslims.

"The College admires Dr. Hawkins’ commitment to caring for our Muslim neighbors, and believes that Christians are called to love all people. The freedom to wear a head scarf as a gesture of care and compassion for individuals in Muslim or other religious communities that may face discrimination or persecution is afforded to Dr. Hawkins as a faculty member of Wheaton College. Dr. Hawkins’ paid administrative leave resulted from theological statements that seem inconsistent with Wheaton College’s doctrinal convictions, which she voluntarily agreed to support and uphold when she entered into an employment agreement with the College," Taylor's email explained.

For her part, Hawkins tells me the idea that she has failed to live up to the Wheaton statement of faith or somehow denied the divinity of Jesus is flat out wrong.

“When the provost says I’m denying the trinity, or I’m conflating Islam and Christianity, is that I’m not a Christian,” Hawkins says.

“To call into question the veracity of my faith, my Christian testimony,” she adds, “is offensive to me and it’s on the basis of one clause in a Facebook post.”

Students at Wheaton held a rally in support of Hawkins at the campus chapel on Monday morning. They held signs saying, “Solidarity does not equal blasphemy.”

Andrew Shadid is a recent Wheaton graduate and a former student of Larycia Hawkins who helped organize the rally. He says firing Hawkins would be a mistake.

“I think Wheaton would be egregiously dismissing an individual who has committed her life to following the teachings of Jesus,” Shadid says.

The idea of Christians and Muslims worshipping the same God is hardly a novel concept. As Hawkins mentioned in her Facebook post, Pope Francis has said the very same thing.

Islamic scholar Omid Safi at Duke University says this is a statement most Muslims would readily accept as well.

To be a Muslim, Safi adds, means recognizing that Jesus is both a messenger of God and a messiah who will come again. Where the two religions differ is in the Christian understanding of a holy trinity of God the father, the son Jesus and Holy Spirit.

But the whole controversy at Wheaton might be more about politics than theology, says Wheaton College professor of New Testament, Gary Burge.

“Our fear is that the political extremes that we now see in our country, typified — maybe exacerbated — by Donald Trump, have been baptized and brought into the evangelical world. And so, I think that this has probably influenced the public reactivity to Dr. Hawkins’ words and her actions,” Burge says.

Burge says he hopes that Wheaton College can find a way forward and resist those kinds of political pressures.

For her part, Hawkins tells me that she wishes she was back in class with her students as the new semester gets under way this week. She will remain on paid academic leave as the college’s review process plays out and it’s not clear how long that will take.

Hawkins says she still hopes for reconciliation, because she loves Wheaton College.

“Whatever happens, Wheaton has been good to me. People at Wheaton have been good to me,” she says. “At this moment in my life, I feel very misunderstood by [college administrators] and very maligned by [them]. But I still care for them as my brothers and sisters in Christ.”

UPDATE: The headline of this story which originally read, "This evangelical Christian professor might lose her job for reaching out to Muslims," was altered to more closely reflect Wheaton College's justification for placing Larycia Hawkins on academic leave.