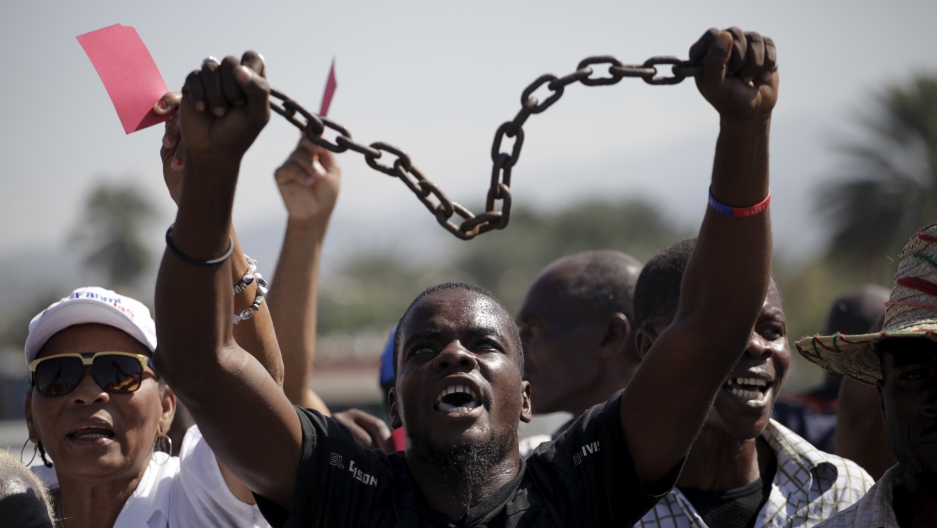 A demonstration on Monday outside of Parliament in Port-au-Prince, Haiti. Supporters of the Movement of Freedom of Liberty for the Haitian Brotherhood was protesting what it calls foreign interference and "occupation."

It's six years since an earthquake devastated Haiti, and killed at least 200,000 people.

In the immediate aftermath, the world rallied and pledged enormous amounts of assistance and development aid. But in Haiti today there is anger about the promises that have fallen short.

The UN estimates that about $10 billion was pledged, and about half of that has been spent.

Much was well-spent, especially in the beginning, according to Brian Concannon, executive director of the Institute for Justice and Democracy in Haiti. Concannon has worked in and for Haiti for more than 20 years.

“I think where the money worked was mostly in the emergency response,” says Concannon. “There was a lot of very good medical treatment; the rubble was cleared; there were some food programs and other things that just kept people alive. It probably saved thousands of lives; perhaps tens of thousands and was very effective. And clearing the rubble allowed the city to move forward. So that part was fairly effective.”

“What hasn’t worked is the more sustainable initiatives,” says Concannon. “The buzzword[s] six years ago was ‘build Haiti back better’ and that simply didn’t happen.

“The harder things like building schools; helping the government provide basic services; improving the employment situation; those kinds of things didn’t work. I think a lot of the aid money was poorly spent. A disproportionate amount of it was spent on international experts, or headquarters back in Washington and other places. Not as much as should have gotten to the ground actually got to the ground."

But, Concannon says, what Haitians will really tell you was that the big problem was that they weren’t consulted.

"Much of the ‘building back Haiti better’ was done the same way that people always did business. It wasn’t well coordinated among the agencies. But more importantly it wasn’t well coordinated with the Haitian people. Everybody from top government officials down to poor people in the street complained that they weren’t consulted and they felt these programs were just being imposed on them without their participation.”

Concannon says the intentions of the agencies were good, and he recalls a donor conference in the immediate aftermath of the quake when everyone agreed that they need to do things differently, to consult the Haitian people and be sustainable. “People said the right things over and over again.”

But the ideals were lost in the execution, according to Concannon.

Overall, Concannon gives the international response to the quake a grade of C.