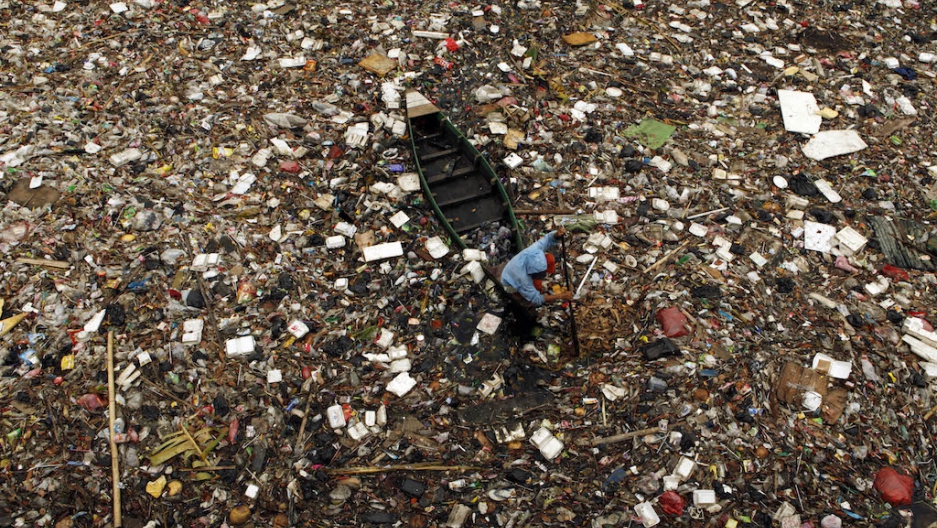 A scavenger collects plastic for recycling in a river covered with rubbish in Jakarta, Indonesia, April 20, 2009.
Credit: Beawiharta
Share

BANGKOK, Thailand — The planet’s seas are choking on our junk: soda bottles, plastic bags and tons of cigarette butts. Distant spots in the ocean — called garbage gyres — have become vortexes where humanity’s trash bobs atop the water for miles on end.

Worse yet, the filth floating on the surface accounts for only 5 percent of all the plastic trash dumped into the sea. According to Ocean Conservancy, a US environmental nonprofit, the other 95 percent is submerged beneath, where it strangles underwater creatures and wrecks the aquatic ecosystem.

It turns out that five countries are the leading contributors to this crisis. And all are in Asia.

In a recent report, Ocean Conservancy claims that China, Indonesia, the Philippines, Thailand and Vietnam are spewing out as much as 60 percent of the plastic waste that enters the world’s seas.

“At this rate, we would expect nearly one ton of plastic for every three tons of fish in our oceans by 2025 — an unthinkable number with drastic economic and environmental consequences,” says Nicholas Mallos, director of Ocean Conservancy’s marine debris program.

Westerners, namely Americans, are seen as the world’s most incorrigible consumers of stuff: soda, gadgets, sneakers and other items that produce plenty of trash. So how did a few Asian countries, many of them comparatively poor, end up churning out much of the plastic waste that swirls through the seas?

As Asian economies rise, people have more cash to blow on Marlboros and Sprites at 7-Eleven. But the junk these habits produce often doesn’t end up in legit landfills.

In the five Asian countries listed above, only about 40 percent of garbage is properly collected. Across Asia, trash is often piled up in communal dumps where stray bits are swept up by the wind and cast into the ocean. Even sanctioned garbage dump sites are sometimes intentionally set up near rivers that flow into the sea. The reason, according to Ocean Conservancy: “Waste will intermittently be carried away by heavy rains or current, refreshing the capacity of the dump to receive more waste.”

Asia’s garbage pickers are the unsung heroes of conservation. They brave filth and disease to root through trash and extract plastic that can be sold to recyclers for a little cash. This ensures that lots of junk is recycled rather than abandoned in landfills.

But these pickers tend to focus on high-value items — like plastic bottles — in lieu of plastic bags, which fetch very little from recyclers. Workers load collected plastic bottles onto a truck in Manila in the Philippines, March 10, 2015.

According to Ocean Conservancy, a scavenger might spend 10 hours gathering plastic bags and take home a mere 50 cents. Devoting that day to picking up only plastic bottles, however, would rack up $3.70.

That means that scavengers skip over much of the waste, which can later end up in the sea.

Corporations crank out tiny portion sizes for the poor

A shopper in California or Texas buys shampoo by the bottle. But that’s often an unaffordable luxury to poor Indonesian or Filipino villagers, who instead buy cosmetics in mini plastic pouches. In Asia’s rural hamlets, corporations sell everything from beauty products to instant noodles in tiny, cheap quantities. This helps even the most destitute laborers afford their wares. The result? Companies are churning out a lot more plastic packaging in poor Asian nations — and much of it winds up in the ocean.

Though corporations aren’t “making plastic with the intent of it ending up in the ocean,” Mallos says, they should be offering up their “world-class logistics, financing, project management and marketing capabilities” to help solve the problem.

In countries where the law is flimsy, garbage truck drivers will often save time and fuel by simply dumping trash by the roadside. These illegal dump sites are having devastating consequences for the seas.

In the Philippines, an island nation where sanitation trucks often flout the law, research suggests that up to 90 percent of the plastic dumped illegally ends up in the ocean. In the five Asian nations profiled by Ocean Conservancy, estimates suggest this practice adds nearly 1 million metric tons of plastic trash to the seas each year. A boy collects plastic near a polluted coastline to sell in Manila, April 9, 2008.

As it stands, humans leak a staggering 8 million metric tons of plastic into the ocean each year, according to research published in Science Magazine. If our behavior doesn’t change, Ocean Conservancy says, we’ll double that rate in just 10 years.

All that garbage is having devastating effects on the seas: choking marine life to death, dramatically warping ecosystems and wreaking environmental havoc that some experts liken to the climate change crisis.