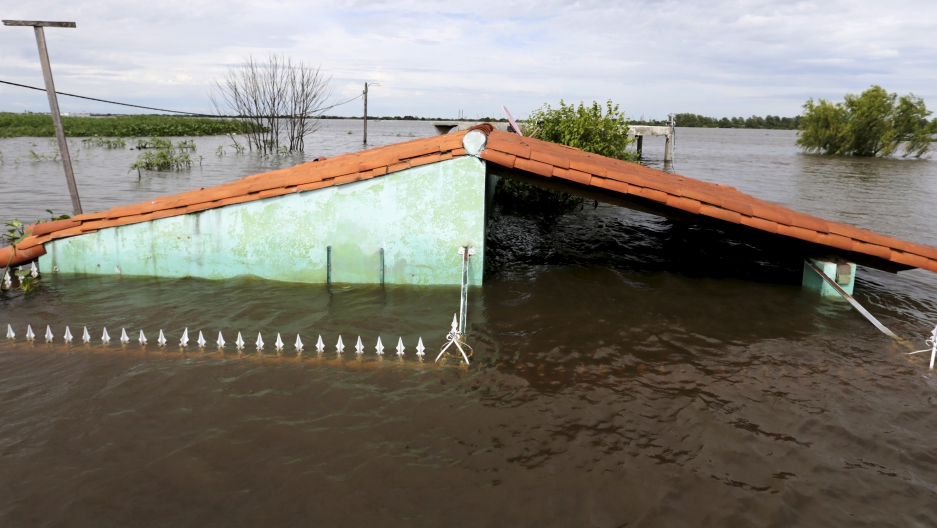 A flooded home in Asuncion, Paraguay, pictured on Dec. 27, 2015. More than 100,000 had to evacuate from their homes in the bordering areas of Paraguay, Uruguay, Brazil and Argentina due to severe flooding in the wake of heavy summer rains brought on by El Niño.
Credit: Jorge Adorno
Share

More than 100,000 people were evacuated from their homes in Paraguay, northern Argentina and southern Brazil as a result of unseasonal torrential rain. International media widely attributed the freaky weather to El Niño.

Yet the whole truth is probably more complex. According to various experts and environmental campaigners, human actions may have been at least as much to blame for the floods as El Niño, which typically appears once or twice a decade. The weather phenomenon creates unusual currents of warm water in the Pacific Ocean that alter rainfall patterns from the Americas to Asia and Australia.

More from GlobalPost: Why the Paris climate treaty must protect the Amazon

The floods may be just the start of all kinds of problems in 2016, they say, that could have been either avoided or minimized by better planning and more sustainable forms of development.

According to Greenpeace Argentina, a major cause of the flooding was widespread deforestation to create agricultural land to grow soy.

Brazil, Argentina and Paraguay are among the world’s five largest producers of soy beans, mainly for animal feed but also for human consumption.

That has come at the expense of a wide swathe of tropical dry forest, the Gran Chaco, that stretches across those three countries and into Bolivia.

“There is no doubt that it is a combination of El Niño and deforestation,” Hernan Giardini, Greenpeace Argentina’s forests campaign coordinator, told GlobalPost. “The forests act as a natural buffer, a hydrological regulator, like a giant sponge that soaks up the water and releases it slowly. The landscape has lost that capacity, and the water just runs off the surface. That is why there has been flooding.”

The exacerbating effects of El Niño on drought in Brazil’s agricultural heartland, and on the extreme vulnerability of poorly located Peruvian coastal communities to flash floods, might have been avoided with better decision-making.

Mike Coe, a scientist who studies the Amazon at the Woods Hole Research Center in Massachusetts, said that the dry season in the Brazilian states of Mato Grosso, Goias, Bahia and Tocantins had already been extended as a result of deforestation to make way for agriculture.

That dry season is set to stretch even further now that El Niño has moved much-needed rainfall out of the four states, which produce much of Brazil’s huge soy and corn harvests.

That could mean that commercial farmers in the region, who typically plant twice a year — once for soy and once for corn — may only see one harvest in 2016.

More from GlobalPost: El Niño could help California’s drought — but it will make India’s much worse

“November was dry but I didn’t notice that it stopped anyone from planting,” Coe said. “But we should know how bad it is going to be by the end of January. When you look at Brazil’s ambitions to be this agricultural powerhouse but also reduce its carbon footprint, then you start to wonder.”

Meanwhile, Elizabeth Cano, Oxfam’s national coordinator in Peru for disaster response and climate resilience, warned that thousands of poor Peruvians who have settled in gulches along the country’s arid Pacific coast are at risk of getting washed out.

Those gulches remain bone dry most of the time — but experience occasional sudden, raging torrents triggered by unusual rainfall in the Andes as a result of El Niño.

Many poor local people are simply unable to find other, safe land to live on. But Cano said there’s also a “lack of rigor” from local and national government here in enforcing planning codes and risk management.

“El Niño doesn’t do it on its own,” she said. “The Peruvian government has been quite good in getting ready in recent months now that we know El Niño is coming.”

“But the focus is on mitigation, how to respond once the event is already imminent. If we were warning today about an El Niño coming four years down the line, no one would do anything.”