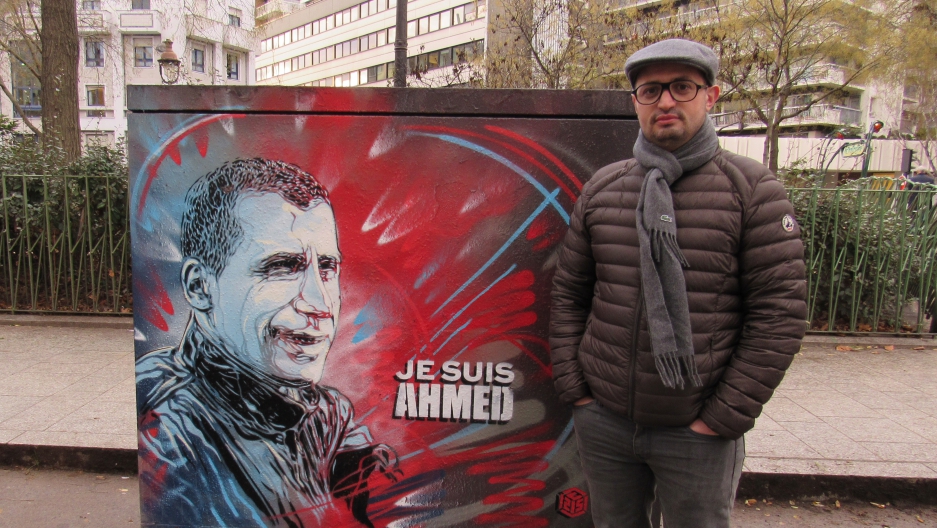 Djamel Adane stands next to a portrait of Ahmed Merabet, the police officer killed the day of the Charlie Hebdo attacks. Adane was there, and he held Merabet's hand while they waited for the ambulance to arrive.

On Boulevard Richard-Lenoir, a group of men lift a flower arrangement delicately off the sidewalk. French President François Hollande and Paris Mayor Anne Hidalgo placed it there earlier this week.

The men tie the flowers to the fence, just beneath a plaque that reads: “To the memory of Ahmed Merabet, murdered here on January 7, 2015, a victim of terrorism while on duty.”

That day, the offices of the satirical magazine Charlie Hebdo were attacked by two Islamic extremists, the Kouachi brothers.  They shot and killed 11 people there and injured 11 more.

Ahmed Merabet, a 41-year-old policeman on duty in the area, saw the Kouachi brothers’ car speed away and ran towards it in an attempt to stop it. But the assailants got out of the car and shot him in the leg, and then point blank in the head.

This scene was captured in a phone video seen around the world. 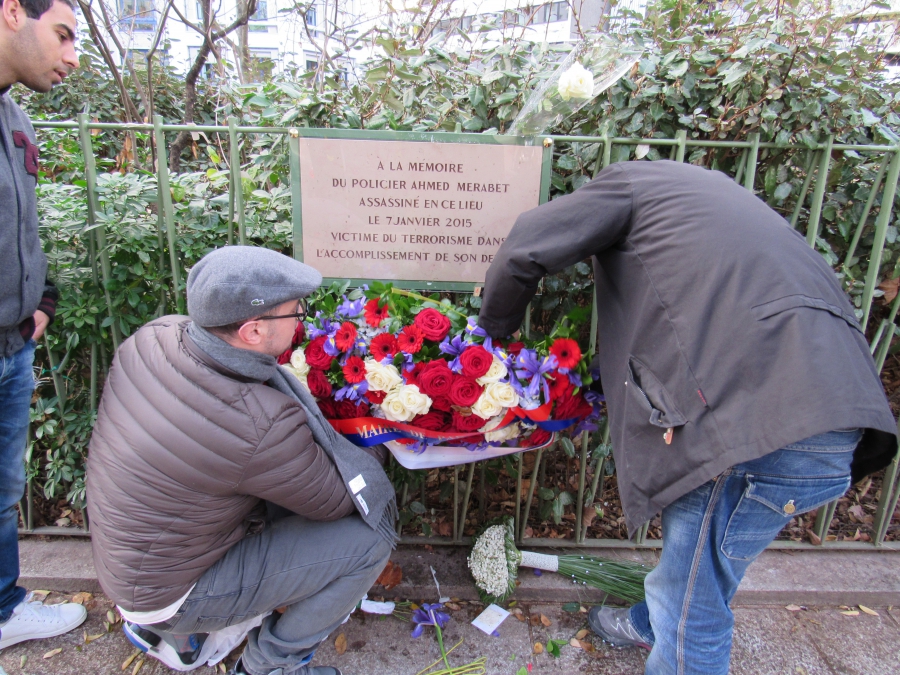 Some of the men in the neighborhood picked up the flowers laid in honor of Ahmed Merabet to protect them from foot traffic and dogs. Everyone in the community knew the local police officer.

The group of men on the sidewalk say they want to protect the flowers out of respect for the memory of their friend, who worked in the neighborhood for eight years. Everyone knew him, including 35-year-old Djamel Adane, who works at a family-run bar across the street from where Merabet was killed. Adane says he won’t forget January 7, 2015, any time soon.

“We heard the shots being fired,” Adane says. “We looked up and saw the policeman on the ground, and the assailants get back in their car and speed away. I ran across the street and the policeman was on his side, face down. When I turned him over, I recognized Ahmed. He had a wound in his leg. I pressed on the wound with a paper towel that people brought me. “

Adane says he talked to Merabet and held his hand as the officer lay on the sidewalk. He says Merabet seemed relieved to see a familiar face. Adane managed to make a tourniquet with the policeman’s belt and he kept talking to him as they waited for an ambulance to arrive.

“It took a long time,” Adane says. “I was alone with him until his colleagues arrived and we waited for the first responders. I have no idea why it took so long, but it seemed like an eternity.”

He has tears in his eyes as he remembers the scene. When the ambulance finally took Merabet away, Adane wasn’t sure if he was alive or dead.

“Looking back on it now, I realize it was very important to hold his hand, and to accompany him on his path,” he says.

And it was important for Merabet’s family to know he didn’t die alone. Adane says because the brutal video of Merabet’s murder was seen all over the world, he’s proud that he could soothe some of the family’s pain.

“I told them that there were people around,” Adane says, “that his colleagues gathered around him, we talked to him and tried to keep him alive. And that was very important to his family. They were relieved to have this information.”

They invited Adane to the funeral. 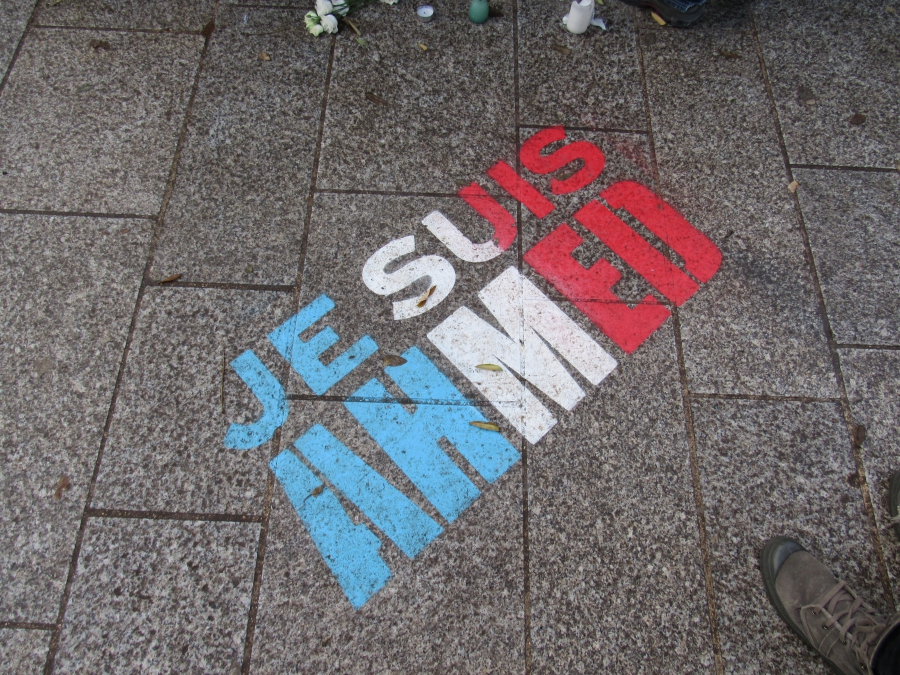 This is the spot on Boulevard Richard Lenoir where Ahmed Merabet, a Paris policeman was shot and killed on January 7, 2015.

People in this neighborhood of the 11th arrondissement were also affected by the November 13 attacks in Paris, including Adane, who lost friends at a bar. In fact, Merabet’s murder took place just blocks away from the Bataclan concert hall, where 89 people were killed. So the anniversary of the Charlie Hebdo attack is stirring up painful memories.

Adane says people here were pleased Merabet received a commemorative plaque, but what makes them even happier is a brightly colored portrait of him on an electrical utility box, signed by a well-known graffiti artist, Christian Guémy, known as C215.

“He put a face on this boulevard,” Adane says. “We see Ahmed’s face; we see the look in his eyes, the lines in his face. It’s a lot more cheerful than a plaque that belongs in a mortuary. We want Ahmed to stay alive and this is a very good attempt at that.”

And now, Adane says, he can see Merabet’s face from his bar, right across the street.