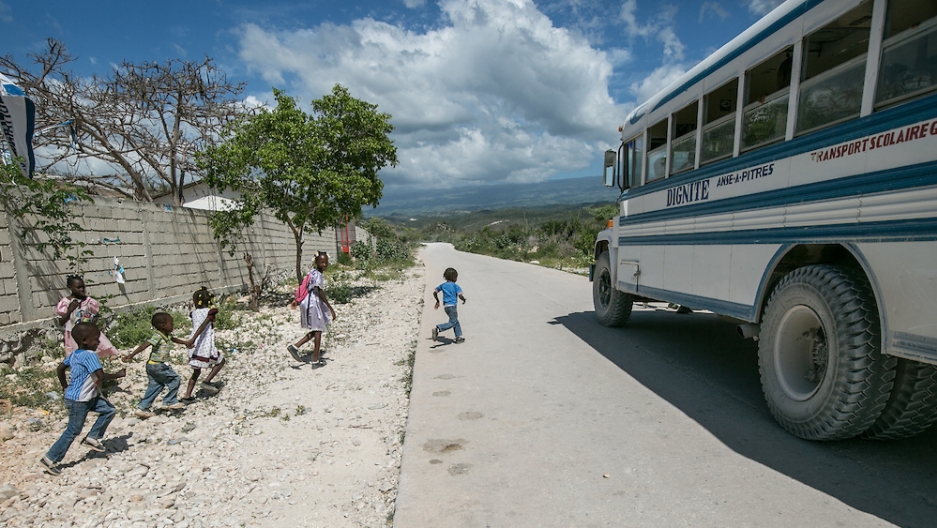 Migrant children board a bus outside the Notre Dame de Lourdes School in Anse-a-Pitres, Haiti, to return to their shelters after morning classes.

The Notre Dame de Lourdes School, on the edge of the Haitian border town of Anse-a-Pitres, is a study in contrasts. In the classrooms on one side of the courtyard, children sit in tidy yellow uniforms, in rows, facing their instructors.

On the other side, kids in an assortment of donated clothes push their way in and out of three crowded rooms. One teacher hustles back and forth, trying to maintain some semblance of order.

The kids in uniform are locals, and their parents are asked to pay tuition. The rest are Haitian migrants from the Dominican Republic, whose parents are assumed to be too poor to pay.

In the past, the school’s principal, Father Luc Leandre, has welcomed a small number of migrant children. But this year the number ballooned to 216, after hundreds of fleeing families set up makeshift shelters nearby.

As Europe debates where to settle hundreds of thousands of migrants, another crisis is playing out here — in smaller numbers but still dire circumstances.

On the island of Hispaniola, tens of thousands of Haitian immigrants and their children have crossed the border from the Dominican Republic to Haiti in recent months, after Dominican officials urged all residents unable to prove legal status to leave the country.

According to a survey, 61 percent of the migrants in the nearest camps are children. The students enrolled at Notre Dame de Lourdes are only a fraction of those children, but they’re already too much for the school to handle with its limited means.

“Working with the migrant children is very difficult,” says Brother Alfred Cherfily, the teacher hustling between the migrant classes. “They don’t know how to behave properly, and they’re violent.”

By "violent," he means the pushing and shoving, finger pointing and tears on constant display when Cherfily is not in the room. 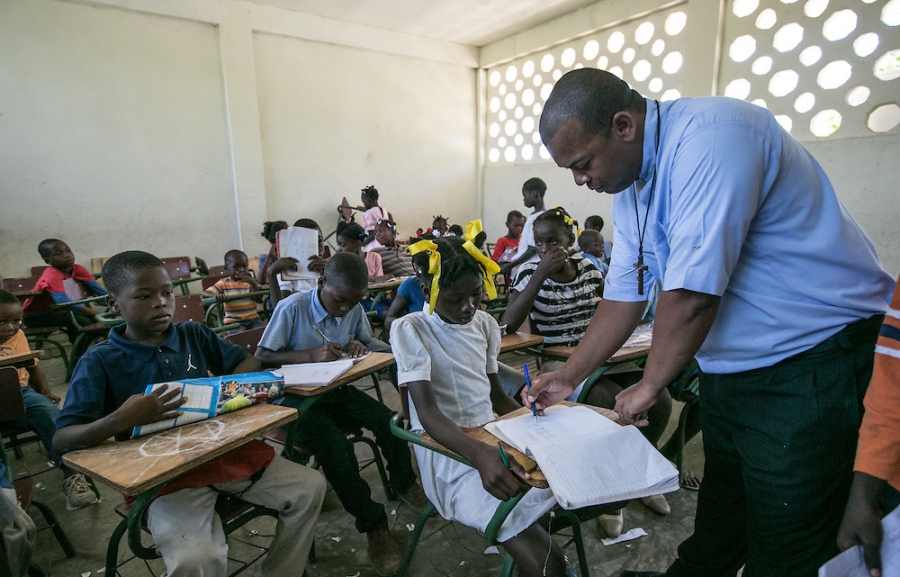 But Cherfily understands this behavior comes from the children being in very difficult circumstances. “Sometimes the parents don’t have the means to clean them, to buy clothes for them,” he says. “They’re living in tents, suffering a lot. Some are sick, from the dust, or kwashiorkor, with their swollen bellies.”

Kwashiorkor is a severe protein deficiency, and many of the migrant children are showing symptoms of it, including orange hair and skin rashes. To top it off, cholera broke out in and around the camps this fall.

Cherfily says the school provides lunch, and for those who need it, they give soap and clothing. And there’s drinking water in the morning, but it runs out quickly.

Adding to the challenges, the migrant students range in age from 4 to 14, and most had never gone to school before, as they lived with their parents in isolated worker communities in the DR.

Cherfily has been going through basic math assignments with some of the older kids, trying to determine their proficiency. Then he switches classrooms, and teaches younger ones vowels, and left from right. And by 11 o’clock, classes are over for the migrant students. They line up for a plate of rice and beans — for many their only meal of the day. Then a bus brings them up the road to their shelters. 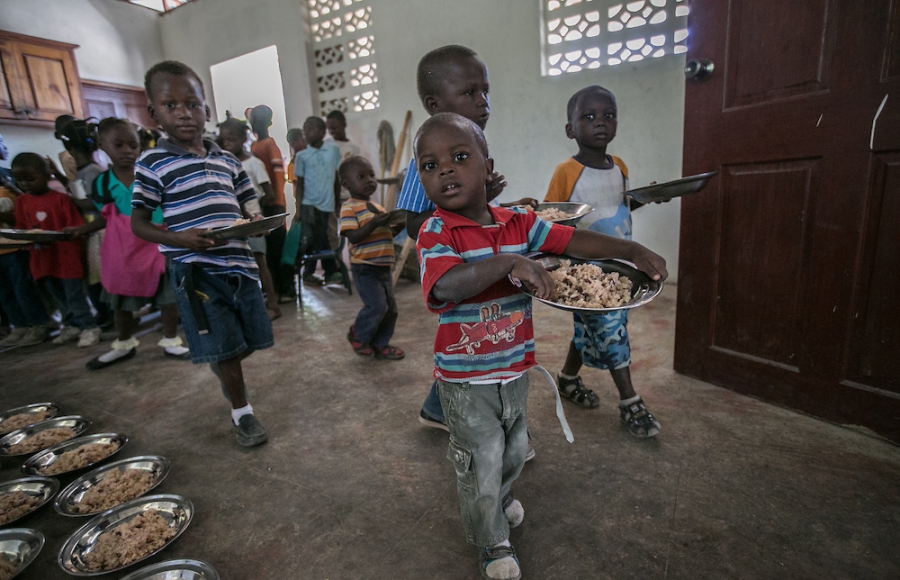 The Notre Dame school is among the few local institutions here that are helping the migrants. There isn’t much else this town of 9,000 can do. It has no electrical grid, no gas station, and just a few tiny businesses. Locals toil in the lowest-level jobs, like harvesting charcoal and importing used clothes.

Still, the mayor, Mikellange Morland, says he’s proud of his town’s response to the newcomers.

“I think this is the best population in the world,” he says. “Why? Because in spite of all the problems the people of Anse-a-Pitres have, they have never turned away a single immigrant. I congratulate them a lot for that.”

There’s been criticism of the national government for not doing enough. A spokesman says the government has provided funds for migrants to relocate to their ancestral hometowns in Haiti, but that it’s reluctant to build latrines and other structures that might make the camps permanent.

Father Luc Leandre says he’s planning for the long term, operating on the assumption his new students aren’t going anywhere soon. He’s hoping for international aid to help hire teachers and provide books, drinking water, and food, and eventually he wants to see the migrant kids sitting in uniforms along side their local classmates.

Update: A previous version of this story incorrectly spelled Mikellange Morland's name. We regret the error.