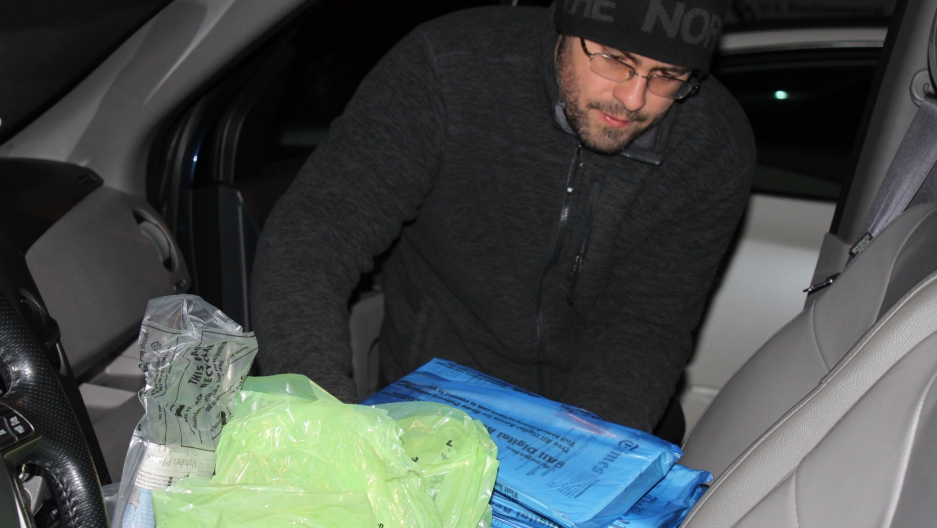 Brazilian immigrant Alvaro DaSilva stacks newspapers in his car before heading out on his pre-dawn route.

Alvaro DaSilva came to the US from Brazil 15 years ago.

He's been chasing the American dream ever since.

That chase begins early each day. Around 2 a.m.

By 2:30 he's on his way to the warehouse where he picks up his papers.

By 3 am, DaSilva is standing before a plywood table, putting papers into plastic bags: blue for the New York Times, green for the Boston Herald, clear for the Wall Street Journal.

He plops them deftly into batches on a hand trolley and wheels them to the car.

By 4 DaSilva is delivering papers in the Boston suburb of Belmont.

He tosses them expertly through the passenger-side window and they land with a satisfying "thwack" on porches and front paths.

Mostly anyway. Sometimes he has to jump out and retrieve one from the bushes or from under a car.

Watching the way he flicks his arm, I ask if he ever gets elbow pain.

"Yeah, I've had tennis elbow twice," he says. "You can't take days off so you can heal. You just keep going."

"Just keep going" could be DaSilva's motto. He delivered papers when he first arrived in the US in 2001. Three years later he left for a better job. And then he left that job to start his own construction company. But when he and his wife were expecting their second child, he went back to the newspaper job because it earned him an extra $1,000 a month. He does it to survive.

"I wouldn't be there if I didn't need it," he says. "If I didn't have a goal to keep me motivated and help me wake up every day and keep going."

For DaSilva, that goal is staying in his suburban apartment so his kids can go to good schools. He has a daughter in high school and a son about to start elementary school.

Lots of people who try delivering newspapers can't hack it, he says. It's not just the early hours and the logistics that can change day by day. It's the relentlessness of it.

"Being there every day, you don't have a day off, a holiday. If you're sick you gotta go in. It doesn't matter how sick you are, you have to go. At least if you want to keep your job."

DaSilva remembers, growing up in Brazil, how his father would carry him to bed if he fell asleep on the sofa at night. He can't do that for his son because he goes to bed before him.

"If I took him to bed like that it was three times at most. I think I lost the time with him that he's growing up. I think that was the hardest thing for me."

And then there's the winter. Things are better now that DaSilva has an SUV with four-wheel drive. But when he started out he just had a regular car.

"I forgot how many times I got stuck, all the aggravation, the suffering. That feeling that you can't quit." 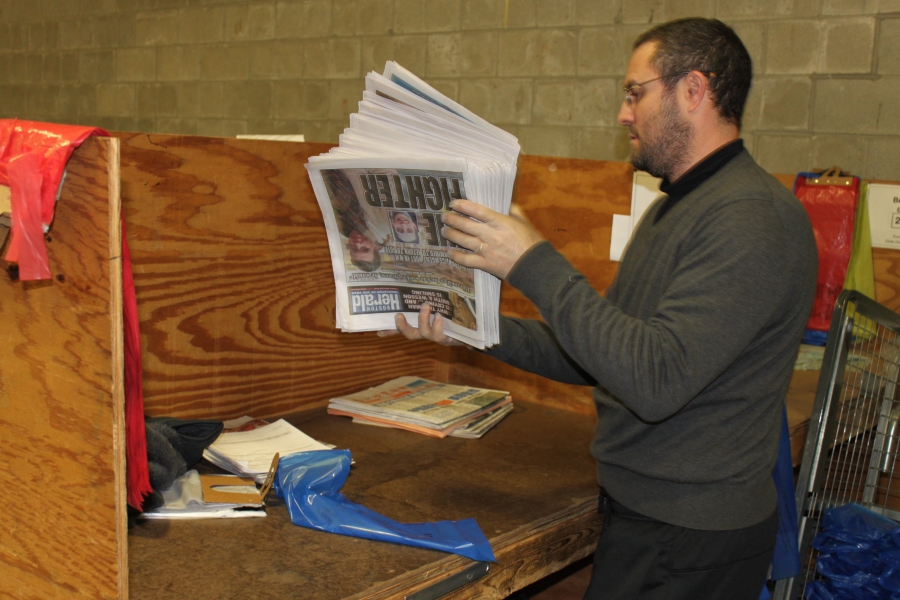 DaSilva organizes his papers at the warehouse.

DaSilva doesn't have any weekends — Sunday is actually the hardest day in the newspaper delivery business. He's only taken one week's vacation since 2009. Plus a day off for his son's birth and his last two anniversaries. Even so, he says he's really grateful for the newspaper job, and it's helped him grow his own construction business during daylight hours.

When we get back to his house at 5:30 after delivering hundreds of papers, it feels like the day should be over. But it's just begun. He'll take a shower, have some coffee, read the paper and then drop his daughter at school on his way to work as a contractor.

Editor's Note: Jeb Sharp got interested in this story when The Boston Globe's delivery system failed, focusing attention on the people who bring subscribers their newspapers each day.