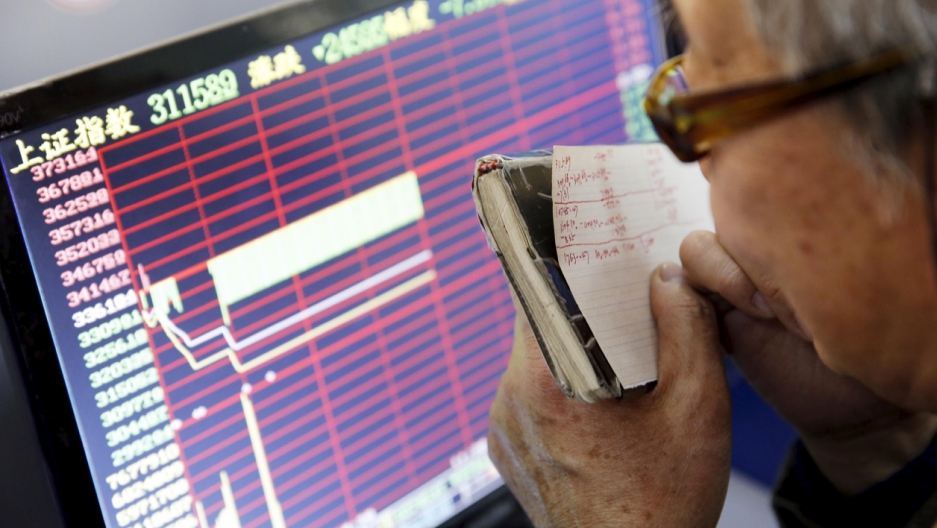 Sometimes a day at work goes so wrong that you’ve just got to close up shop, head home, crawl under the covers, and try again tomorrow.

Sometimes it takes just minutes to realize everything's going to fall apart. Say, 14 minutes, the length of time active trading was open on China’s stock markets Thursday. After a 15-minute halt didn’t manage to reverse 10 minutes of early sell-offs, the markets shut less than 30 minutes after opening, making Jan. 7, 2016 China’s shortest trading day ever. If yours is a visual learning style, Michael McDonough over at Bloomberg Intelligence offers a helpful picture of just how bad things got so quickly. Things looked shaky across global markets as they reacted to the crash.

This is the second time this week a new “circuit-breaker” mechanism has abruptly stopped trading in China. It’s set to kick in if the CSI 300 index drops by 5 percent — pausing trading for 15 minutes — and to suspend trading for the day if the index stocks fall by 7 percent. That's what happened in under a half hour today.

What’s driving all these sell-offs? Analysts point to concerns about China’s currency depreciation as a major factor. But others say the circuit-breaker itself, introduced just this week, is a big part of the problem. Quartz has already declared the new safety switch “broken,” saying the mechanism is driving investor panic instead of controlling it. The Economist came to a similar conclusion, headlining one blog: “China crashes its stock market with circuit-breakers meant to save it.” If your day is going so well you’ve got five minutes to spare, read on to learn about the “magnet effect” and how it could be skewing the market.

Saudi Arabia and Iran are bitter rivals. Their competition for influence in the Middle East has heated up this year via Yemen’s civil war, in which a Houthi rebel movement is vying for power with those loyal to Yemen’s exiled president Abd Rabbuh Mansur Hadi. Saudi Arabia believes Iran is backing the Houthis, although the level of that support is disputed.

Saudi Arabia, with US support, stepped into that fray in March, a bombing coalition trailing behind it. Coalition airstrikes have been raining down on Yemen ever since, leading to a huge amount of civilian casualties. As GlobalPost’s Sharif Abdel Kouddous reported from Yemen late last year, the evidence of those airstrikes killing innocents is everywhere.

Now Iran is claiming Saudi airstrikes have made its embassy in Sanaa a target. Those on the ground say the embassy doesn't actually look damaged, though Iranian officials have claimed otherwise.

This argument comes in the midst of a major upset between the two countries this week, after Saudi Arabia executed a prominent Shiite cleric (and dozens of others) last weekend. Protesters in Tehran stormed Saudi Arabia's embassy there, and Saudi Arabia promptly cut diplomatic ties. Iran, also facing Saudi boycotts of its commercial products, banned product imports from the kingdom on Thursday.

You’d probably rather not be reminded of Weinergate, the uncomfortably apt nickname for the Twitter and sexting scandal that drove former US Congressman Anthony Weiner out of office in 2011.

The thing is, there are some unavoidable Weinergate parallels going on Down Under, most especially in the case of former Federal Minister for Cities and the Built Environment Jamie Briggs, who was ousted from the ministry on Dec. 29 for sexually harassing a young female diplomat. That was just the beginning of the scandal, unfortunately. Read all about it here.

As GlobalPost’s Allison Jackson writes, “Given his experience as the former federal communications minister, Australian Prime Minister Malcolm Turnbull might want to give his colleagues a lesson about text messaging.” They need it.