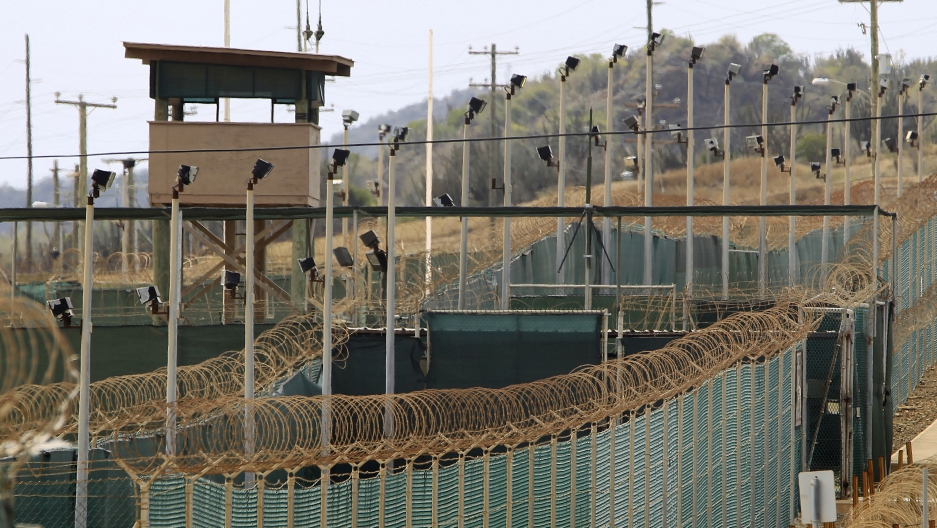 The exterior of Camp Delta is seen at the U.S. Naval Base at Guantanamo Bay, March 6, 2013.

Two Yemeni men held at Guantanamo Bay will be calling Ghana home, at least for the next two years.

The transfer of Mahmud Umar Muhammad bin Atef and Khalid Muhammad Salih al-Dhuby is part of an Obama administration effort to empty the US base of people held for years without charges.

Why Ghana? They got a deal, says Carol Rosenberg of the Miami Herald, who has covered Guantanamo Bay prison for more than a decade.

"It illustrates the kind of ends of the Earth that the Obama administration is going to,'' she says, "to find places for these cleared men to go so that they can get out of Gitmo before Obama gets out of the White House."

Dhuby had been approved for release in 2006 and Bin Atef in 2009 — but their release never materialized.

"They were put into a conditional release status," explains Rosenberg, "which was something different than plain old transfer."

A 2009 task force had said that they didn't want the detainees to simply be released but rather they should be put under the custody of another country. Rosenberg says that at the time, there were concerns that having spent years in a US prison, these men might have become radicalized.

They were never charged with a crime and never went before a review board. According to leaked military documents from 2006, Dhuby “probably” fought along al-Qaeda at the battle of Tora Bora in 2001 in Afghanistan. Bin Atef was described as an “admitted member of the Taliban.”

The US Congress will not allow Guantanamo prison detainees to be housed on US soil and so the Obama administration has been looking to find a home for them elsewhere.

The situation of Yemeni detainees is particularly difficult since the US will not allow them to return to Yemen. In the case of these two men, Rosenberg says that the Ghanaian government is accepting these men as a humanitarian gesture.

They will have to remain in Ghana for two years and after that, the country will be able to issue them travel documents and they can use the document to move to another country.

This is not the first time that Guantanamo Bay prisoners are transferred to a third country. Previously, Uganda and Cape Verde accepted a number of them.

Rosenberg says that the release of Dhuby and Bin Atef marks the start of a series of prisoner releases planned for January. 15 more men are on the list for this month.

"One will go to Kuwait. He's a Kuwaiti and the Kuwaiti government has said that they are sending a plane for him on the weekend," she says. Another, a Saudi national, will return to Saudi Arabia.

There are now 105 detainees at Guantanamo, nearly 50 of which have been cleared for release. But it's a very slow process and they could well be in prison for at least another couple of years.

In fact, Rosenberg believes President Obama will not be able to realize his plan to shut down Guantanamo Bay before he leaves office.