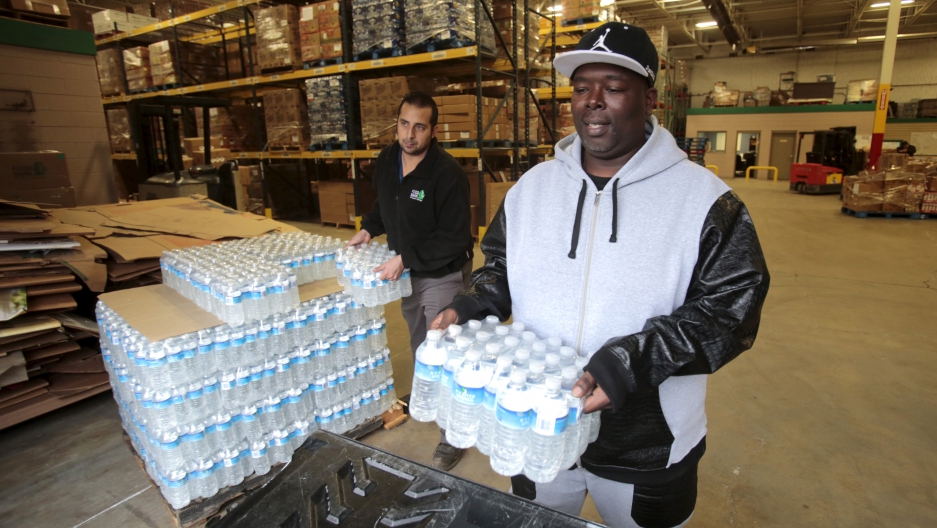 Anthony Fordham picks up bottled water from the Food Bank of Eastern Michigan to deliver to a school after elevated lead levels were found in the city's water in Flint, Michigan December 16, 2015.

After 18 months of public outcry about toxic levels of lead in the city’s water, residents in Flint, Michigan, felt vindicated when Governor Rick Snyder declared a state of emergency, and the federal government announced its own investigation.

The actions came on the heels of a written statement in which Snyder apologized to Flint residents who had been exposed to the contaminated water.

“I want the Flint community to know how very sorry I am that this happened,” Snyder wrote. “And I want all Michigan citizens to know that we will learn from this experience, because Flint is not the only city that has an aging infrastructure.”

The public health crisis began 18 months ago when the city switched from Lake Huron water to the Flint River water system to cut costs. The new water was not being treated with an anti-corrosive, causing the pipes to deteriorate and exposing residents to hazardous levels of lead.

Despite studies from water quality experts and considerable outcry from residents, officials did little to acknowledge or resolve the problem. One study showed that the number of children with above average levels of lead in their bloodstream had nearly doubled since the city switched to the Flint water.

Marc Edwards, an expert on municipal water quality at Virginia Tech, formed a volunteer research team to address the problems with Flint’s water. He was shocked with both the contamination that his team discovered and the fact that people at the city seemed to know about it, but refused to do anything.

At least 25 percent of homes in Flint had levels of lead that was well above the federal level, which is 15ppb. In some homes, it was 13,200ppb. And nearly every home had water that was distasteful or discolored.

“It was the injustice of it all and that the very agencies that are paid to protect these residents from lead in water, knew or should’ve known after June at the very very latest of this year, that federal law was not being followed in Flint, and that these children and residents were not being protected,” says Edwards. “And the extent to which they went to cover this up exposes a new level of arrogance and uncaring that I have never encountered.”

Melissa Mays, a Flint resident and parent, immediately noticed the difference when the switch in the water supply was made.

“My children would ask me, ‘Why does the water smell funny? Why is the water yellow?’ They would come running out of the bathroom screaming because the bath would be yellow or blue, and they’d say, ‘Mom, something’s wrong with the water again.’”

Mays says the water quality directly impacted all three of her children’s health, potentially with long-term consequences. Tests confirmed that everyone in the family has high levels of lead, copper, aluminum, tin and chromium in their bloodstream.

“My middle child is 12,” continues Mays. “He fell off his bike and he has two buckle fractures in his wrists, just from falling over. So his bones are weaker. My oldest has holes in the smooth sides of his teeth. The dentist believes it’s because of the lead. And my youngest is still struggling. We can’t get his white blood cell count above 4, when a year and a half ago, it was 10.4. So his immune system is compromised, and he’s getting sick basically whenever somebody sneezes. And they’re all now struggling in school: memory, brain fog. ... I’m terrified for my kids.”

Mays formed “Water You Fighting For,” a group that aimed to raise awareness of the problem, and to call on the government to act. But rather than anger at the dangerous levels of chemicals, she received ridicule. The authorities continued to encourage residents to drink the water, despite knowledge that it was potentially harmful. The former mayor would even go on TV and drink tap water, just to show it was safe.

“We had all these experts bringing us all of this science and evidence. They would sit there and tell us that even if it’s discolored, just run your tap for a while and it’ll be fine. ‘It’s safe. Just let your water run. No big deal. It’ll be fine. This is just a bump in the road.’ It was just a plethora of excuses and lies.”

Edwards, the water scientist from Virginia Tech, said that the situation essentially amounts to a cover-up.

“Rather than address the legitimate science questions, they mounted a public relations campaign to discredit the residents, to discredit us. I have never seen this level of arrogance and incompetence. It was mostly confined to a few key individuals, but other people are guilty of being far too trusting of those individuals, and not listening to the people who were drinking this water.”

Edwards notes that the nearly the entire problem arose from the fact that they did not include a corrosion control chemical to the water. And in a city with roughly 50 percent lead pipes, like Flint, that can be extremely dangerous.

“So not only is it unsafe and illegal, it’s financially irresponsible, too,” says Edwards.

The hardest hit in these types of situations are those who don’t breastfeed — the most common way for lead to be passed to children is through infant formulas — and those with an inability to buy bottled water. In both cases, it’s the poor who bear the brunt of the risk.

“It was truly the poorest people who could not afford to buy bottled water, who couldn’t buy filters, who couldn’t spend the time to breastfeed, who were hurt the most,” Edwards says.

While Mays continues to struggle with the health costs and the damage to the home that the water problems caused, she hopes that the case, and its eventual recognition by the state and federal government, might be an example for other citizens who feel as though their voice will never be heard.

“I hope that the city of Flint is a shining example of citizens standing up when they know something’s wrong, getting the right answers, and continuing to fight no matter how hard or how much they dismiss you,” Mays says. “And I want us to be an example of why cities and states should never cut corners when it comes to water. I’m hoping that other crises are averted for what happened here.”