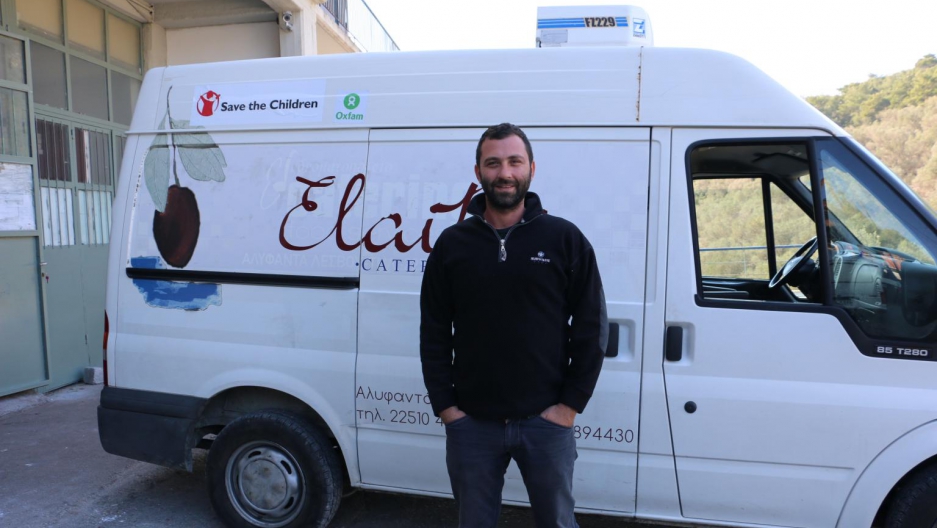 Manolis Tzanetos serves thousands of meals a day to refugees arriving on the Greek island of Lesbos.

Manolis Tzanetos has been serving meals to refugees on Lesbos since 2002. Back then he was making 40 or 50 meals a day. Today he and his team make thousands.

Tzanetos, 37, was born in Wamba in the Democratic Republic of Congo, to Greek parents. He moved to Greece when he was 7.

After studying in the UK, he returned to Greece and bought back the family's hotel six years after his father went bankrupt. They grew the business, making frozen food to sell to restaurants. Soon the local government hired them to make food for refugees.

By 2005, they were making so many meals they had to expand and they opened a catering company. These days he makes food for schools, the elderly, the homeless, most of the government contracts in the area are with his company.

He says he serves a lot of rice and lentils. He tries very hard to cater to the tastes of refugees.

More from this series: These professors fled the Taliban so their kids could get an education

He says convincing the Greek government it was better to serve people food they liked was quite a battle.

“At first there was a set menu from the government and they had pasta four days a week. It took months to change it,” he says, clearly exasperated. “It’s pointless to pay for something they don’t like. It took months to take the decision to exchange the pasta for rice.”

“Last year, at the same time I was serving about 300 meals a day, now it’s thousands.” Until the second week of September, the Greek government would pay for the meals. Then they abruptly stopped, saying they could no longer afford it.

Tzanetos says the Greek authorities are months behind on their payments to him. He says he wasn’t paid from March to September and that the government owes him about one million euros, which means Tzanetos owes money to his suppliers.

“I don’t know how long we can continue,” he says. At the end of September, NGOs started helping out with the cost of meals. 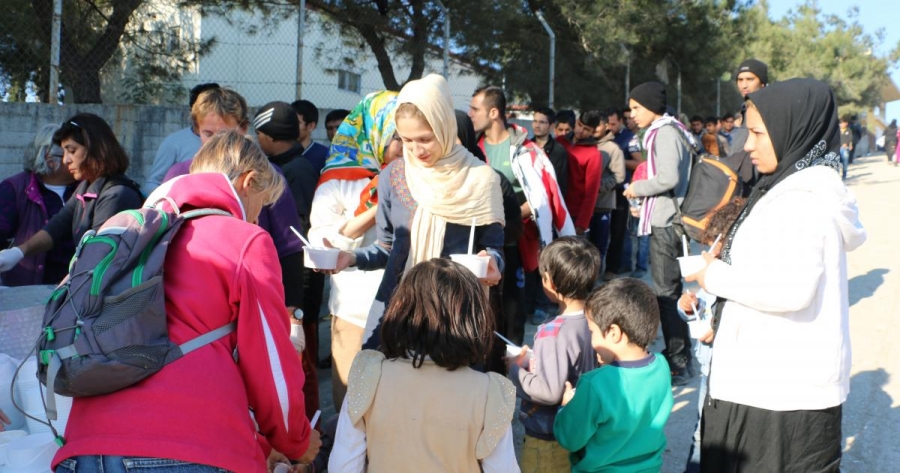 “It was the volunteers that kept people alive for a few days [after the Greek government stopped paying],” he says. Tzanetos also gave away food for free: more than 70,000 portions, he says. Now international charities Oxfam and Save the Children pay for lunch. Volunteers pay for dinner. He says he tries to keep the cost of the meals as low as he can.

“It’s the biggest migration in history. Millions of people leave places, their homes and lives. Today it’s them, maybe tomorrow it will be us in the same position.”

He sometimes provides free rooms to volunteers at the hotel when they cannot afford to pay. He says one volunteer said to him, “I will stay as long as I have money.” Now she is still staying with him, but doesn’t pay for her room. “They are doing things I cannot do, these volunteers. Helping them is in the end helping the refugees.”

He says many people on the island are helping as much as they can, even those who grumble about the refugees’ presence.

“Sometimes even the people who say they don’t want them, you find them sorting clothes for them later.”

Life jackets all along the shore at the base of a steep slope along the coast of #Lesbos, #Greece

Handing out food to thousands of hungry people can be challenging: “Sometimes it’s not easy. Sometimes you even have to be aggressive with people because, when they’re stressed, it’s difficult to control the crowd.”

Providing refugees with food over the years has introduced him to many people.

“I was in Athens in the underground [subway] and I saw some people looking at me.” At first he was a bit worried. “I thought they were looking at my bag and wanted to attack me. At the first stop I got out and they did too. Then they called my name and hugged and kissed me.”

It turned out they were Afghan refugees he had helped on Lesbos two years before who had recognized him. “Another Syrian guy would call me for years from Belgium. A lot of people call me or we’re friends on Facebook.”

Like many people on Lesbos, Tzanetos has seen the soaking lifeless bodies of refugees who have died at sea and such things take a toll.

“I hope they will find a solution. The sea is very dangerous. It has to stop. We have to do something about all these deaths. It’s not nice people getting killed near the place that you live, you cannot not be affected by that,” he says. "In August I wanted to go swimming and I got all these images in my head and I didn’t want to go.”