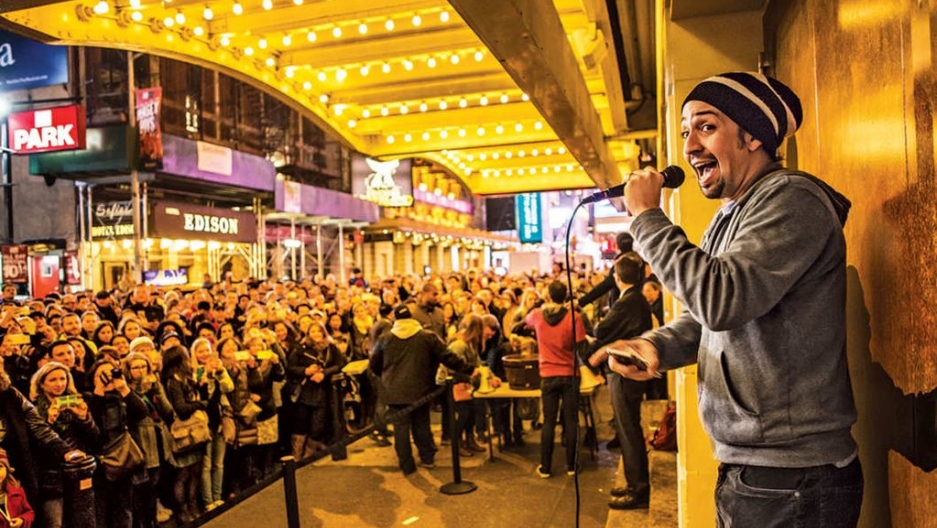 Why do the best shows on Broadway have to be so pricey? Tickets for themuch lauded hip-hop biography "Hamilton"average over $600, withsome tickets topping$1300.The show is going to havean open-endedrun in Chicago, and a national tour. But you can see "Hamilton" for free any time onYouTube. Well, it's not really the musical itself, but a very quirkysideshow made with loving care.

Before every performance, anyone couldsubmit their name into a bucket to win $10 front row seats. Every night, hundreds did. Whilewaiting to find out if they won outside the Richard Rogers Theater, potential audience members weretreated to a pre-show performance from star and composer Lin-Manuel Miranda and/or members of the cast. Fan videosof the performances spread on social media with thehashtag #Ham4Ham. Recently, the musical's official YouTube feed started putting up higher-quality videos. It's beena way for this New York-rooted show to interact regularly with fans worldwide over social media ---especially all theones who have already devouredthe cast recording album, produced by Questlove.

Here are a few of my favorites:

Lin-Manuel Miranda performs withKyle Jean-Baptiste, the first African-American to play the role of Javier in "Les Miserables." Tragically, Jean-Baptiste died just two weeks after this video was filmed, falling off a fire escape.

Miranda performs "A Whole New World" with Lea Solonga, who is currently starring in the musical "Allegiance" and voiced Jasmine in the 1992 Disney classic "Aladdin."

The three actors who have played King George in the show ---Jonathan Groff, Brian D'Arcy James and Andrew Rannells ---lip sync a choreographed number to the Destiny's Child-style song "The Schuyler Sisters" from "Hamilton."

Not to be outdone, the Schuyler Sister and the other actresses in "Hamilton" sing/rap thenumber "My Shot," usually performedby the guys in the show ---and they totally kill it.