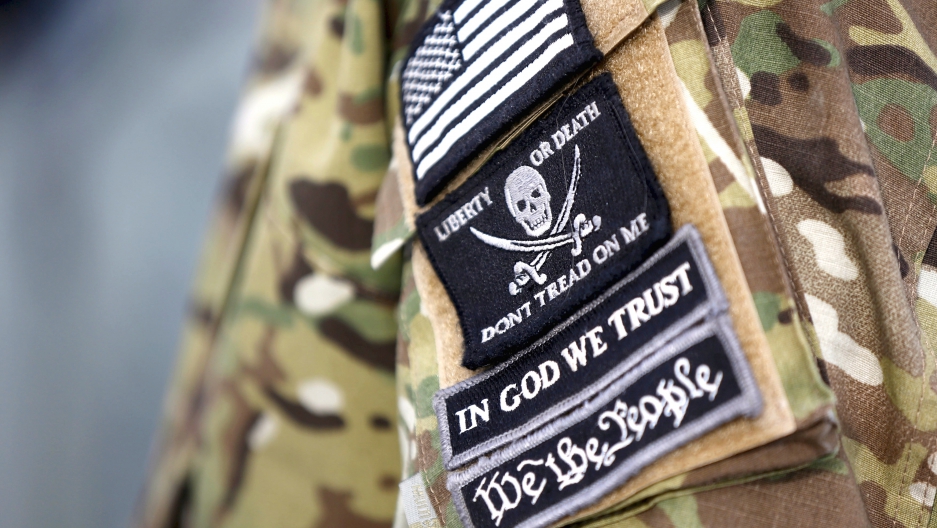 A patch on the sleeve of a militiaman is seen at the Malheur National Wildlife Refuge near Burns, Oregon on January 4, 2016. The leaders of a group of self-styled militiamen who took over a US wildlife refuge headquarters over the weekend said on Monday they had acted to protest the federal government's role in governing wild lands.

In Oregon, the armed militiamen occupying federal government buildings say they are standing up for the people’s rights to the land. In the Israeli occupied West Bank, an extreme group of radical Jewish settlers reject their state’s legitimacy and claim to be fighting for the land promised to them by God.

And the parallels between the groups don’t end there.

“We’ve seen similar developments here in Israel over the past number of years,” say Neri Zelber of the Washington Institute for Near East Policy. “These radical sub-state groups, very zealous, very militant, at least in their ideology, [have been] taking action [and] contravening the authority of the state and causing great harm.”

Zilber is talking about a minority within the larger Jewish settler movement that refuses to recognize the Jewish state and takes action into its own hands by committing acts of vandalism and violence against Palestinians, Christians and, at times, against the Israeli military itself.

An incident that made headlines around the world and shocked many Israelis, Zilber points out, took place last summer in a Palestinian village in the West Bank. A Palestinian toddler and both of his parents died after an arson attack that Israel’s domestic security agency says was carried out by a young Jewish extremist, who’s been charged with murder, belonging to a radical group calling itself, ‘The Rebellion.’

“These are the types of actions that this small subset of these militant settlers are actually doing,” Zilber says.

Many Jewish settlers are motivated by their religious ideology. They see Jews returning to the biblical lands of Judea and Samaria, the names they prefer to use for the West Bank, as part of a process of redemption. Some see themselves as part of a divine effort to rebuild an ancient Jewish kingdom.

There’s a religious dimension to the armed occupation in Oregon as well. The militiamen who have adopted the name ‘Citizens for Constitutional Freedom’ are led by Ammon Bundy, whose father, Cliven Bundy, was part of an armed stand-off with federal officials in 2014. The Bundys come from a faction of Mormons who have talked about their faith as a major reason for standing up against the US government.

Ammon Bundy spoke about his religious motivation for going to Oregon in this video posted January 1.

But the analogy only goes so far.

“It’s too far of a stretch,” says Gershom Gorenberg, author of “The Unmaking of Israel.”

Gorenberg says that Jewish settlers working to establish “facts on the ground” by building homes for themselves in the Palestinian West Bank have done so with the Israeli government’s blessing and support. Going back to the early days of the occupation in the 1970s, “they have, in fact, always been clients or proxies for the government.”

As for comparisons of Bundy and his fellow militants to the Jewish extremists most vehemently opposed to Israeli state authority, Gorenberg says one enormous difference really stands out.

Referring to the two Jewish suspects recently charged in Israel in connection with the deadly arson attack last summer, he says, “The people who murdered the [Palestinian] family ... went further than occupying a government building.”

The indictments of two Jewish extremists might turn out to be a turning point for the Israeli government, Zilber says.

“Having said that, these extremists didn’t rise in a vacuum. There’s a whole political ideology, a whole infrastructure in the West Bank that gave rise to them and what they’re doing now.”