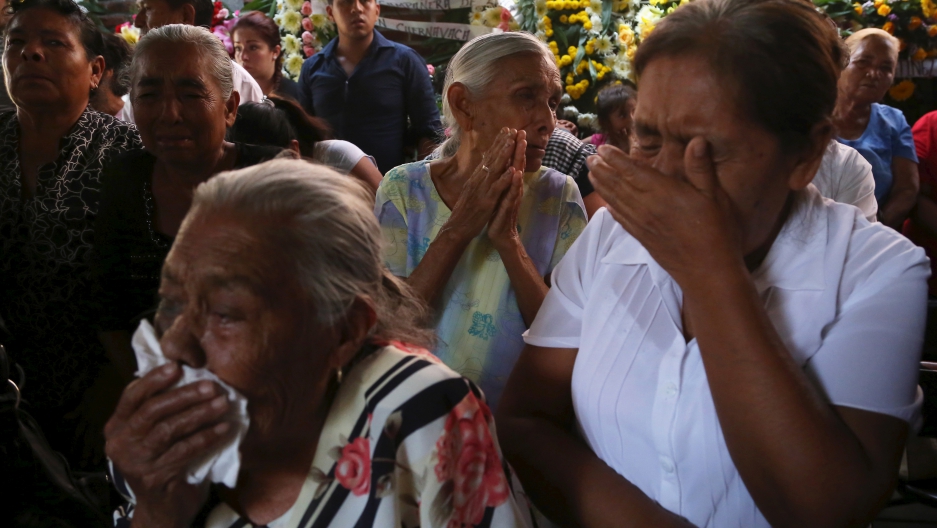 Residents react during the funeral of newly-installed Temixco mayor Gisela Mota in Temixco, south of Mexico City, after Mota was shot dead on Saturday by four armed gunmen, January 3, 2016.

On New Year's Day, Gisela Mota was sworn in as the new mayor of Temixco, south of Mexico City.

Less than a day later, she was dead. Gunmen had burst into her home, beaten and shot her to death. Two of the attackers were killed in a shootout with the police; at least two others were arrested.

Mota's brutal death is another grim reminder of the violence that grips Mexico. Over the past decade, at least 70 mayors have been murdered and many others targeted, according to Alejandro Hope, security editor for El Daily Post in Mexico City.

Hope says there is no concrete answer to who was behind Mota's assassination, but investigators believe she was victim of drug cartel violence.

"The state government of Morelos is claiming she was targeted by a specific drug gang, known as Los Rojos," he says.

The way Hope sees it, local mayors and officials are targeted "because they are the source of three things: Muscle, information and money."

As Don Winslow, author of “The Cartel”, writes in Esquire, in Mexico, "mayors appoint the police chiefs, and the cartels want their own candidates in those positions, people they have either bribed or intimidated or both.”

Mayors and other officials also have access to a lot of private information that can be useful for organized crime.

"They know who owns what in a specific town," Hope says, and the criminals can use that information to go after wealthier targets.

If that's not enough, officials can also be sources of income. "It is well documented that some of these gangs have extorted money directly," Hope says. In some cases, they have demanded and received more than 10 to 20 percent of the total budget of a municipality.

But officials sometimes simply fall victim to the rivalry that exists between competing cartels.

For now, the town of Temixco mourns the death of its mayor. The nation's flag is flying at half-staff at the municipal office and two large black ribbons and two wreaths adorn the walls.

Temixco, Hope says, is suffering from rampant corruption and unemployment and Mayor Mota had promised to change that.

Sadly, she was only given a few hours to make good on her promises.