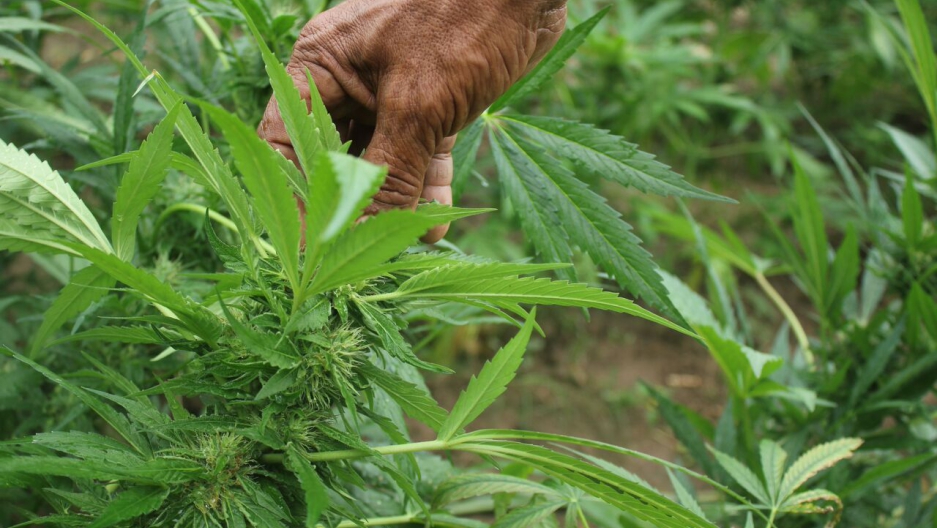 A marijuana farm in western Mexico.

It's a tough time to be a Mexican pot farmer.

The price of marijuana has been plummeting partly because of the loosening of laws in parts of the US — encouraging growth of more high-end pot in America.

That's meant that some farmers in the Mexican state of Sinaloa are branching out into other types of crops — some legal, some not.

Los Angeles Times correspondent Deborah Bonello has been reporting on the challenges facing marijuana farmers. Could free-market economics have done what years of a war on drugs could not?

Bonello spoke to host Marco Werman about what she discovered.

A. Well I spent some time in the mountains of Badiraguato, which is in the state of Sinaloa up in the north. And speaking to some of the marijuana farmers there, all of them talk about a dramatic drop in price ... marijuana has gone from selling for about $100 per kilo to about $30 a kilo and that's a change that's been happening over the last two or three years ...

The price is going down and the buyers are buying less. As far as I understand it, these small-scale farmers, the way the business model works, they produce on their own volition and then buyers who are sort of the middle men between them and the cartels, basically give them the price that they decide.

Q. The fact that the price for marijuana has dropped a lot for Mexican farmers must not make the powerful drug cartels in Mexico very happy. What has it meant for them?

A. Most of the cartels are very diversified. As you know, there is a heroin boom in the US right now.

A lot of the farmers in the hills are switching to poppies because it's more lucrative and a stronger market, so the cartels have definitely spread their bets in terms of their investments in heroin, methamphetamines and the transportation of cocaine — not to mention extortion and kidnapping — so it's definitely not going to put them out of business.

Q.  What story did you hear from the farmers that showed you just how much things have changed with marijuana economics?

A. Many of the farmers I spoke to said they were probably going to stop cultivating marijuana because it's not very good business.

When they farm, they have to invest a certain amount of their own money in labor, fertilizer. For a lot of them, the profit margin just isn't enough. And a lot of farmers have always had small poppy plots that they've developed in tandem with their marijuana plots.

As I understand it, it's still more lucrative to farm marijuana than poppies in the Sinaloa Mountains because they only get one harvest a year for poppies and they get two of marijuana.

Q.  I would imagine the government in Mexico City is also trying to figure out what to do next. I mean, they must be looking at a state like Colorado and seeing the profits come in and tax revenue come in and thinking maybe we should think about our own policy on marijuana legalization and decriminalization?

A. Yes, in fact later this month there is a big official conversation due to take place on the legalization of marijuana in Mexico. There are things that are moving along.

President Enrique Peña Nieto has been very insistent that he is against the legalization of any drugs but he has said that he is open to having his mind changed. But the more US liberalizes, it's hard to see how Mexico can resist legislative changes...

It has this huge export market of marijuana that's getting sent to the US, so that's going to have an impact, but also like so many things that filter through the border from US to Mexico, legal marijuana will be no different.