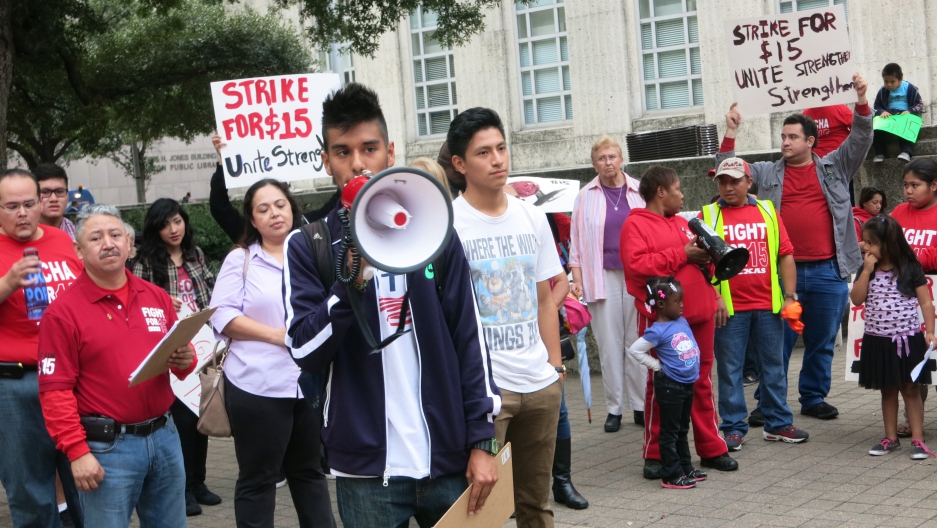 Daniel Meza holds a bullhorn as Mario Sidonio, to his right, waits his turn to speak at a rally in front of Houston's City Hall.

About 100 people gather at City Hall in Houston to rally for a $15 minimum wage. One by one, speakers take the bullhorn — a state representative, a union organizer, a preacher.

The speakers are poised and polished, but also kind of predictable. Then, 17-year-old high school senior Mario Sidonio steps forward. He looks shaky and raw, in a good way. My ears perk up.

“It’s not enough staying here and yelling,” says Sidonio, shifting between Spanish and English. “We have to go out and vote, we have to want that change. We have to make it happen, OK?”

Sidonio is part of a new program called “Emerging Latino Leaders.” It’s a five-month fellowship being tried in six cities in Texas and California, with the goal of attracting 180 qualified participants. High school and college students apply to attend weekend seminars, shadow local public officials, and experience their rights to assemble, in this case demanding a higher minimum wage.

In Houston, the rally transforms into a march through downtown Houston with people yelling call-and-respond chants. A handful of other teens, including Daniel Meza who also spoke at the rally, join in the march.

“There is an adrenalin, yeah,” says Meza at the march. “My throat is sore. I feel good, I really do feel good.”

I ask Meza what he thinks he’s accomplishing in the streets.

“At the very least, increasing awareness. A lot of people passing in cars have been taking pictures and just watching us. So I’m sure they’ll share it — social media does a lot nowadays to get the word out.”

A major goal of Emerging Latino Leaders Latinos is simple: engagement. Latinos are the least likely ethnic group to go to the polls. If they voted more, Latinos could be a force in coming elections — roughly every 30 seconds, a Latino in the US turns 18. Seventy percent of those teens were born in the US and automatically have the right to vote.

After the march, I went out for pizza with the teens and their mentors, where the students debriefed each other on the evening’s events.

“I had a lot of stories that I wanted to tell, and as soon as I got the bullhorn in my hand, I forgot them all,” says Meza.

Sidonio says, “It was great to see a group of people wanting the same thing and actually fighting for it, actually doing something about it, not just complaining.”

“I was able to take part in a part of history,” says Christian Ornelas. “I am more sure that it will cause change in the near future.”

“So there are going to be two options here,” explains Duarte holding a bag of candy. “One, the people who are voting keep all of the candy. And option two is that we’re going to distribute the candy evenly.”

The teens all seem pretty into the exercise. The seminar is also a fun, social gathering that brings together 30 kids from different schools.

About 30 students are giving up some of their Saturdays to learn about civic issues like the history of voting rights.

I pull Mario Sidonio out of class and ask how he’s feeling a few days after his speech with the bullhorn.

“I was granted a crowd and was able to express my thoughts, and I’m really proud of myself. I’m just a bit shocked of how I was able to do that.”

I asked if he wants to do it again.

“Definitely,” he says. “Despite the nerves. Nerves come and go, but experiences like that, it doesn’t really leave.”

I ask Sidonio why he’s giving up his Saturdays to be here. He says he feels responsible to vote this year, in part, because his parents can’t.

“My dad was deported actually back in 2006, and my mother was about to be deported when I was in the sixth grade. That really impacted me because I was just kind of scared at night knowing the potential that my parents could be taken away from me.”

I hear similar stories from a lot of the students. By the way, Sidonio says his dad made it back to Texas illegally and his mom is now a legal resident.

I also met with high school senior Nirka Flores. I ask her if there are any presidential candidates she especially dislikes. She says what all the students I met say: Donald Trump and his harsh rhetoric against Latino immigrants.

“Not Donald Trump becoming president, because I’m pretty sure he’s just a show. But the scary part is that many people think like him," says Flores.

Most of the students I meet say they’re planning to vote for Bernie Sanders. A couple say Hillary Clinton. And Dulce Ramriez, who’s 18, says she won’t vote for anyone — she’s not a US citizen.

I ask her why she's giving up her Saturdays to learn about a political process she can’t fully participate in.

“I can really make a difference. I can still tell my friends, it’s important for you to vote because, if you don’t vote, you’re pretty much letting somebody else make the decision for you.”

The student leaders all seem to grasp the challenge they’ve been given: not only voting themselves, but motivating a historically apathetic group to put faith in the democratic process.

Mario Sidonio, left, and Daniel Meza standing behind a sign at a Houston rally for a $15 an hour minimum wage.