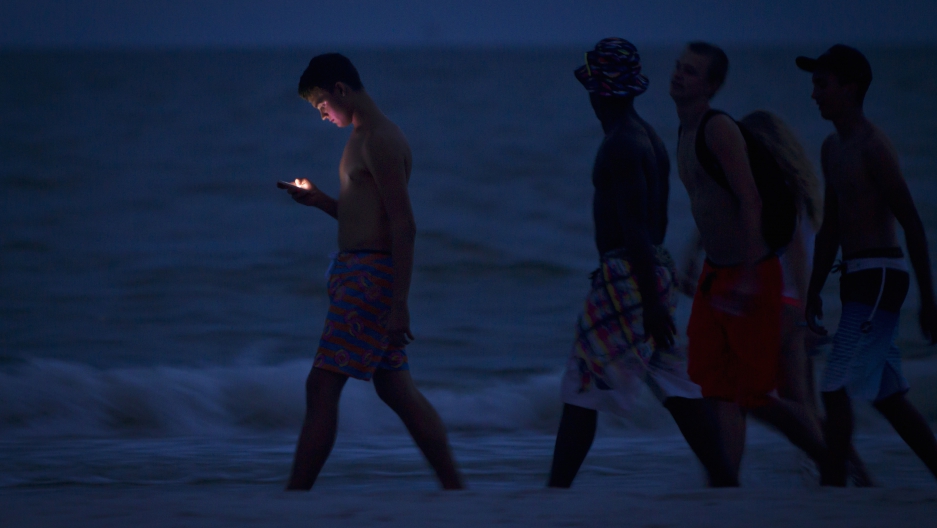 A person looks at his cell phone as he and others walk along the beach at twilight during the Labour Day long weekend in Fort Myers Beach, Florida August 31, 2014.

Around 7:30 on a 60-degree morning in early November, Cornell University ornithologist Marshall Iliff parked in the upper lot of Millennium Park, outside of Boston, and started walking.

Over the next two hours, he covered less than a mile through a landscape of scrubby brush, grassy hillsides and beaver swamp. The sky was calm and clear, a good day for bird watching. Iliff saw 45 species that day, including 22 Canada geese, eight mourning doves, a great egret and a red-headed woodpecker — a tally he recorded in real time through an app on his iPhone.

Iliff doesn’t always use an Internet-connected digital device while in nature; sometimes he chooses to bring a notebook to record birds instead. But more often than not the smartphone comes along, and with it eBird, one of the apps his team at the Cornell Lab of Ornithology developed.

“It’s almost impossible for me to leave it behind these days,” he says. “It’s just become a way of life.”

Smartphone users today can choose from thousands of nature-themed apps that allow them to keep track of what they see, take guided walks through national parks, collect data that researchers can tap and more. In a similar vein, museums are using new technologies to add immersion and interactivity to exhibits, making nature accessible to anyone — even when they’re indoors.

For people who value the wilderness as a place for escaping the always-connected world, though, such advances raise an unsettling question: Does technology enhance our relationship with nature or pull us further away?

Glimpse Into the Future

To assess the extent of the nature–tech landscape, Paul Jepson, head of an interdisciplinary conservation research lab at Oxford University in the United Kingdom, and Richard Ladle, a conservation biogeographer at Federal University of Alagoas in Brazil, teamed up to analyze the million-plus apps offered on Google Play. In early 2013, they conducted a targeted search with 100 nature-related words — including wildlife, collecting, environment and wetland. Then they filtered out irrelevant hits, such as “Tiger Insurance.”

In total, they found just over 6,300 apps that had something to do with nature. Most were wallpapers, ringtones and games. Many others were digital versions of field guides and books.

But some offered a glimpse into the future of nature tech. In addition to eBird, the Cornell group has launched another app called Merlin Bird ID, which uses eBird data to help birders identify birds they spy in the field based on description, time of year, GPS coordinates and what’s been observed at that location in the past.

Innovations from other developers include an app called LeafSnap that uses visual recognition software to identify trees based on their leaves; Coral RKV, which uses a smartphone to turn two-dimensional posters of coral reefs into three-dimensional experiences; iNaturalist, which hosts a social network of nature observers, shares data with scientists and allows users to crowdsource species identifications; Cicada Hunt, an app that listens for an insect that might be extinct and automatically lets scientists know if any peep up; and iBats, which uses a plug-in microphone to record ultrasonic bat calls, processes that information to identify the species, and provides researchers with information they can use to monitor changes in biodiversity and other indicators of environmental quality.

Meanwhile at museums, the race is on to offer simulations of outdoor experiences, often for urban kids (and grown-ups) who aren’t able to experience the real thing. London’s Natural History Museum now features a virtual reality film that immerses viewers in a reconstructed ancient world, surrounded by sea creatures that lived more than 500 million years ago.

At the New York Hall of Science, an exhibit called Connected Worlds transports visitors into a virtual ecosystem they can manipulate to see how ecosystems influence each other over time and space. The hope is to send people home with a new appreciation for the balance of nature, says Stephen Uzzo, chief scientist at the museum. He and his team are now developing a tablet app to offer the same experience at home. They’re also trying to assess whether the exhibit actually changes the way people think or how they behave.

“One of the things we’re interested in investigating is whether any of this is generalizable,” he says. “Does it change attitudes toward day-to-day experiences, whether you walk in the woods and see a squirrel gathering nuts, or notice fruit from Chile or New Zealand in the grocery store?”

For Better or for Worse?

Whether apps and other technologies enhance or impede our ability to connect with nature is a complex question that is challenging to study. With apps like Merlin, Iliff suspects, gaining knowledge can help users take the first step toward caring.

“Once you put a name on a bird, you can learn more about its habitats and learn if it’s a bird in peril and why,” he says. “You can’t Google it until you know what it’s called.”

Even if they don’t increase individual users’ affinity for nature, apps like eBird, which compile entries into freely downloadable data sets, have other benefits. Available as a website since 2002 and an app more recently, eBird has so far collected some 280 million records and counting from around the world, Iliff says, which have contributed to time-lapse maps that show the timing of seasonal migration. Thousands of people have tapped in to the program’s database, he adds — including scientists, who have used eBird to inform more than 100 published peer-reviewed papers. Both eBird and iNaturalist make user observations available to an open-access database called the Global Biodiversity Information Facility, which now contains more than 570 million records.

Not everyone is so enthusiastic about the benefits of nature-based technologies, however. Those that offer shortcuts to species identifications and instructions about how to navigate through parks could cause people to forget how to appreciate the wonder of the natural world, says Bill Borrie, a professor of park and recreation management at the University of Montana. Data is important, he says, but collecting it shouldn’t come at the expense of noticing what’s happening around us.

“Being told what you should pay attention to and how you should pay attention to nature takes away from the mystery and the sense of discovery,” Borrie says, adding that there is value to experiencing the unpredictability and even discomfort of wild places. He once sat outside the IMAX movie theater at Yellowstone National Park and listened as tourists emerged into daylight after watching a hyper-real film of the park’s highlights.

“I remember hearing them say, ‘Wow, that was better than the park!’ and, ‘Mom, do we really have to go back to the park?’ I don’t want the outdoors to be disappointing to people.”

But Jepson sees it differently. Technology, he notes, has always mediated our relationship with nature: First came tool making and fire building, then books, binoculars and Gore-Tex. Cameras have long brought the world’s most remote places to coffee tables and television sets. Technology has built roads into wild places and the vehicles to get there. And few people find fault with using these tools to enhance our appreciation of the outdoors.

If anything, Jepson says, innovation lags behind the potential modern technology offers to engage users in nature.

“Everyone’s got smartphones — they’re not going to go away,” he says. “What an opportunity.”

The true balance may lie somewhere in the middle, in a still-elusive sweet spot where technology enhances nature without substituting for it. Still missing is an app that tells us when to look at the screen and when to look away.

This story was first published by our partners at Ensia, an environmental news magazine based at the University of Minnesota.