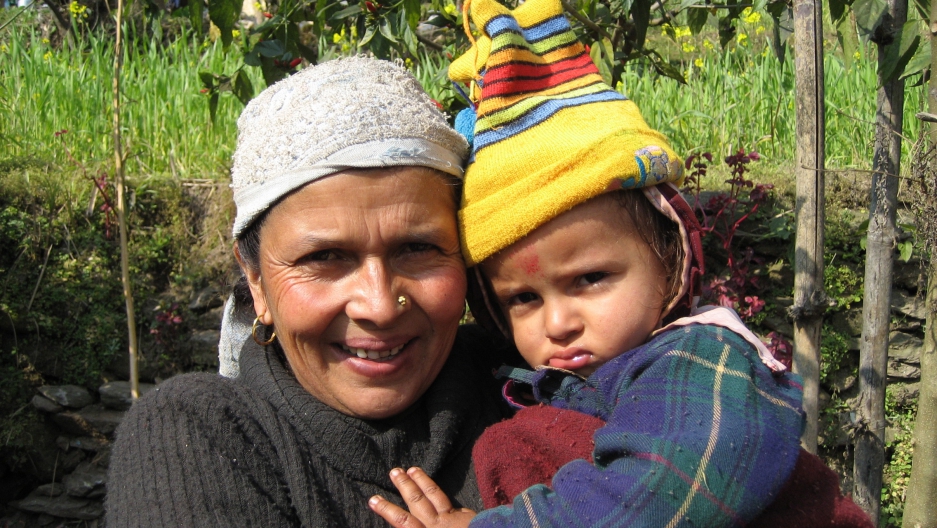 Harimaya Subedi (left) with her grandson Pascal. Subedi has been a widow for more than half her life in Nepal.

Every winter, when Nepal is dry and cold and the Annapurna Mountains are white on the horizon, I spend a month or two living with Harimaya Subedi in her three-room mud and stone house. I call her "Aamaa." She is 58, and has been a widow since age 23.

Aamaa is a vibrant lady who can sling a bundle of wood equal to my weight from her head and carry it up a mountain. She has loyal friends in her village, and two male neighbors help with labor that’s considered too strenuous or culturally unfit for women, such as driving the ox plow. In the evenings, sometimes we sit around the kitchen fire, and neighbors come over to gossip. Despite poverty and illiteracy, on a day-to-day basis Aamaa’s life is balanced and safe.

But for all practical purposes, Aamaa has lived the last 35 years of her life in ritual mourning, and she will be a widow until it's time to mourn her in turn.

Just like that: As number of widows grow, widowhood is changing in Nepal

The Hindu widowhood customs Aamaa practices are part of a larger set of public rituals that honor the dead.

The primary mourning period, called kriya, involves 13 days of fasting, bathing, and prayer. Both men and women observing kriya do not touch others, wear only white clothes with no seams, and must prepare their own food with no salt. Like the funeral pyres that burn out in the open by the riverbank, ritual mourning in Hindu culture is austere and undressed. Community and extended family also forgo salt and take part in shared ritual; to be bereaved is to be publicly marked, and recognized.

But widows have historically been saddled with additional cultural and legal practices that go a step further: lifelong chastity, a vegetarian diet, abstaining from red clothes, and obstacles in securing inheritances and travel documents, which require male signatures.

Even now, women do not have primary rights to their children, who are considered members of their father’s families — even if the father dies.

And there are smaller things, too: ​In the 13 winters Aamaa and I have spent together, I’ve never once seen her wear the color red, which is traditionally the primary color worn by married women, the color of beauty.

. There was certainly never any chance Aamaa might remarry, and each April, we observe sarad on the anniversary of her husband’s death. When it comes to festivals, weddings, any variety of cultural happenings, Aamaa attends as a widow.

To understand Hindu widowhood, says Anne Mocko, an expert in public ritual at Concordia College, it helps to understand what it means to be a Hindu wife.

In Nepal, women marry in to their husbands’ families and are adopted in to their husband’s multigenerational homes. Land inheritance passes through men; in an agrarian economy, land is wealth. Spiritually, Hindu scripture essentially recognizes the fullest expression of a woman’s religious life as her role as a wife and mother.

Mocko points out that, critically, this setup provides security as long as a woman stays within it. A husband is responsible for his wife’s well-being, and if a woman is widowed at a venerable age, she is cared for by a son who inherits the household, in which she has become a respected matriarch.

Widowhood customs at their most conservative, therefore, can be seen as reinforcing a secure social and spiritual identity for women, limited as that role may be. And for old women in rural areas, these customs are often meaningful as such.

But women widowed young fall outside society’s ready role for them, Mocko says.

“If you don’t have kids at all, or you only have girls, it’s nobody’s job to make sure you’re OK. It’s not your in-laws’ job, because you didn’t provide them with a grandson, and it’s not your birth family’s job either. Somebody might step in and do it because they’re nice, but it’s socially acceptable for nobody to be responsible for you.”

Add in illiteracy, an agrarian economy that does not offer much opportunity for people without land or family, and the young widow faces a cursed fate indeed if her marital family is unkind. Seen as unlucky, she may be shunned, isolated, and barred from celebrations, too.

But cultural expectations for young widows are evolving fast.

The literacy rate among women in Nepal has risen steadily, going from 15 percent in 1981, which is around the time Aamaa had her children, to 75 percent in 2011. The agrarian economy is changing, offering more opportunities for independence. Cell phones and social media have become ubiquitous, connecting women to each other and to information. And with thousands of young men migrating abroad for work, there are more young women home alone than ever before.

Even at 58, these changes have touched Aamaa, too.

She owns her land and house, where she lives alone. Her two daughters are educated, living in cities, and they look after her. When the neighbors aren’t over and it’s just us two chatting over the fire, we often talk about the future.

Her perpetual fear is not fear of oppression.