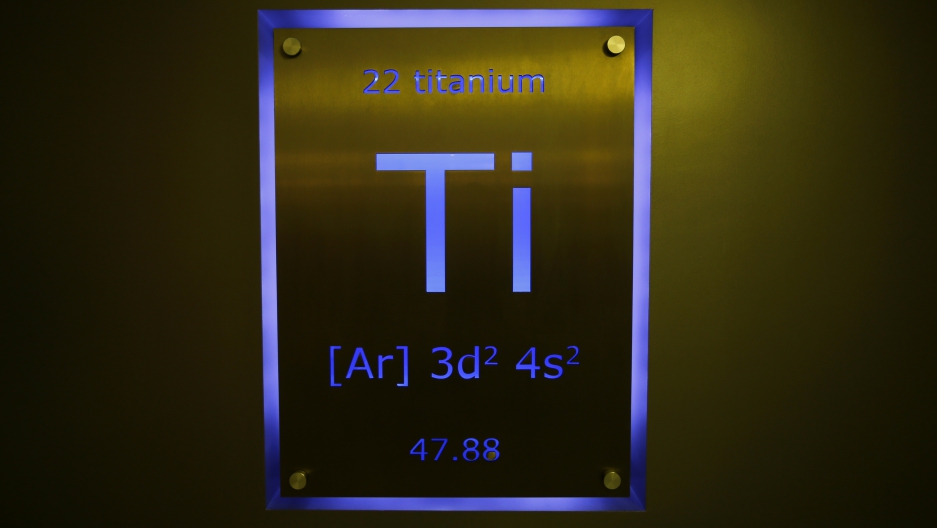 A sign showing titanium on the periodic table of elements is seen at the Nobel Biocare manufacturing facility in Yorba Linda, California May 16, 2013.

If you really can't remember that far back, the periodic table is that cool chart in science class that displays all the known chemical elements. Anyway, these four new elements are man-made and highly unstable.

"Traditionally, the names of elements have either been associated with people or with places, or perhaps some figure from Greek mythology," says Andrea Sella, a chemistry professor at University College London.

Yes. It's the element called, Promethium.

But the naming process is just that, a process. The BBC detailed it. "Scientists who discovered them will start things off by proposing a name. But it will be down to the International Union of Pure and Applied Chemistry (IUPAC) to approve it. A special division of the US-based group has to accept the proposal. There is then a public review period of five months before the IUPAC council gets the final approval. Once it's ready, the name is announced in the scientific journal Pure and Applied Chemistry."

It's long. And there's plenty of horse-trading that happens along the way. But Sella thinks that elements need names. "I think it's very important to have names for things because that gives them an individuality and makes it possible for us, mentally, to distinguish one from the other," he says.

As for possible names?

Sella has plenty of ideas. "One would be 'Daltonium,'" he says. "John Dalton was an English chemist who really revived at the beginning of the 19th century the idea of the atom. I think think it would be nice to celebrate him."

But of course a chemist would want an element named after a fellow chemist.