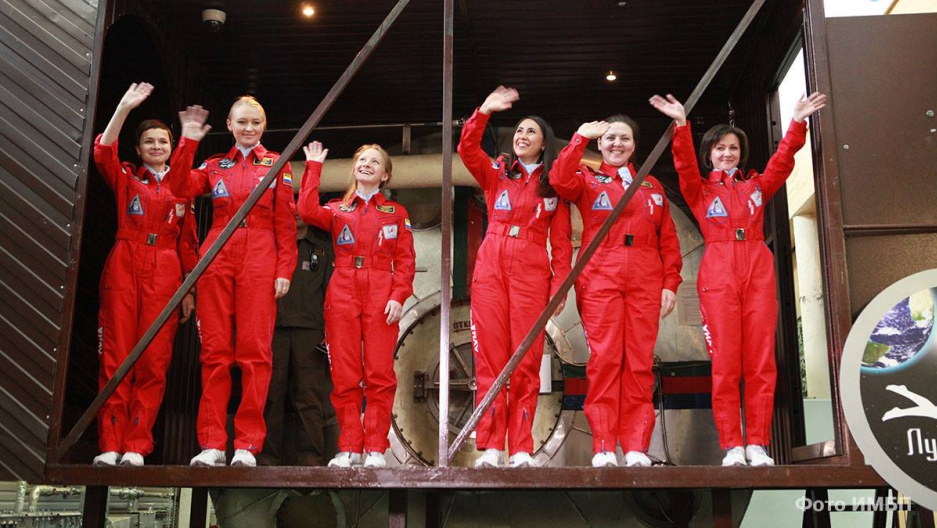 Courtesy of the Institute for Biomedical Problems

Deep space travel has always been something of a Russian specialty — at least the simulated kind. The Russian space agency has been testing the effects of deep space on its cosmonauts since the Soviet Union began flying missions to the stars in the 1960s.

And yet, amid all that history, only one simulation, in the year 2000, had a mixed-gender crew.

It didn't go well. A fight broke out among male crew members after one allegedly tried to steal a kiss from his female crewmate.

This time, the deep space experiment featured all women — the first all-female crew of its kind, Moon 2015 organizers claim.

The six Russian women underwent eight days of simulated space flight in a mock space capsule — the time it would take a real crew to fly to the moon and back. Or just about.

The eighth day was tacked on to simulate adverse weather conditions delaying re-entry and testing the crew’s reaction to stress. A different form of pressure came from the bank of cameras and microphones facing them upon their return to earth.

One by one the volunteer cosmonauts emerged, wearing red flight suits, from the capsule's hatch. The women — in fact, all scientists in their 20s and early 30s — saluted their superiors before being presented with ... flowers.

Now flowers — that's just Russian tradition. But in the run up to the experiment, Russian media also asked how they could manage on board without men? Without makeup? Shampoo? Cellphones? A promo video by the Institute showing the women posing for selfies didn't help matters. 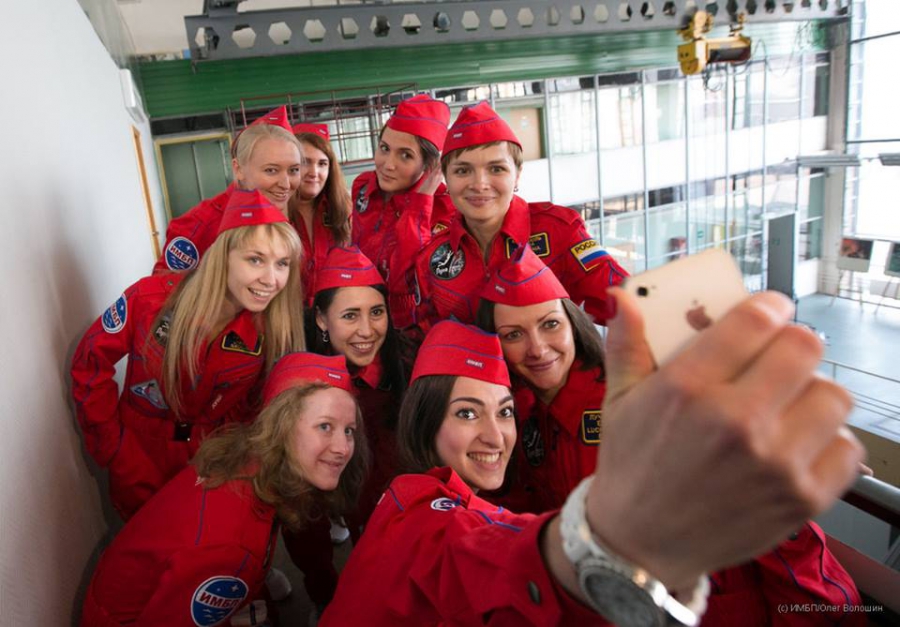 Russian cosmonauts pose for a selfie.

Courtesy of the Institute for Biomedical Problems

But, according to Sergei Ponomarev, the scientific director of the Russian Moon 2015 experiment, an all-female crew actually has a big advantage when it comes to deep space travel.

Namely, they get along.

"From what we've seen, the women worked entirely as one team. They had no conflicts,” says Ponomarev. “This is a really very good crew. With some additional training, this crew could go to the Moon, the International Space Station, Mars or other planets and do their work perfectly well," he adds.

Daria Komissarova, a senior researcher on the mission, called the experience inside the capsule an overwhelmingly positive one. Moreover, it reaffirmed some old childhood aspirations.

"I was always dreaming about space and spaceships ... but it was always a distant dream,” says Komissarova. “Now following this experiment,  I think it's one worth trying. And in Russia, I think we need to develop women into the space industry," she adds.

Traditionally women have had an iconic place in the space program here: In 1963, Soviet cosmonaut Valentina Tereshkova launched into orbit under the call-name "Chaika" — the seagull — becoming the first woman in space.

Soviet Premier Nikita Khrushchev seized the moment for what it was: a propaganda coup. Later, he appeared with Tereshkova on Red Square, where he chastised the US for discrimination against women in the Space Race.

“The bourgeoisie always claim that women are the weaker sex,” Khrushchev proclaimed. “Look at what our Soviet woman has shown to America's male astronauts. She has shown them who is who."

Tereshkova joked that with women now "storming the cosmos," the world's male cosmonauts “wouldn't be quite so lonely.”

But it was 19 years before the Soviets sent another woman into space.

A planned all-female voyage in 1985 was tabled over technical and, later, funding issues. In the post-Soviet era, only two more Russian women have been in orbit. By contrast, women make up some 25 percent of NASA’s current ranks of astronauts.

The Moon 2015 experiment isn't likely to change that in the short run. But it does come amid an effort by Russia to re-establish supremacy in the cosmos — presenting opportunities to close the gender gap in the stars.

While the crews of that mission won't be known for some time, Moon 2015 flight commander Elena Luchitskaya says she hopes their experiment will help the next generation of women cosmonauts secure their fair share of tickets for the ride.

“There should be equal spaces made for men and women ... particularly on deep space missions,” says Luchitskaya. “I hope things will change and that our experiment gives a small push to show that women are ready to handle these situations no worse than men.”

In fact, with 'the right stuff' to go where no woman has gone before.