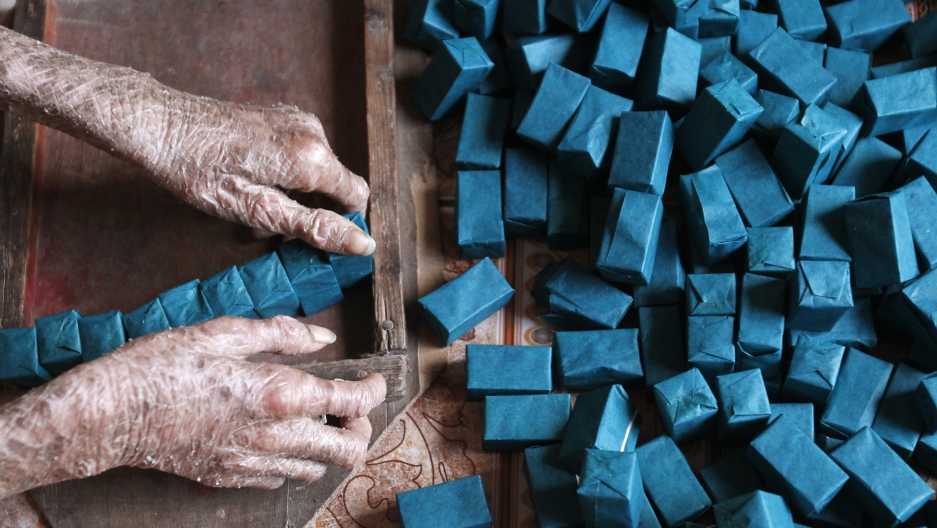 Luong Van Nam, 16, a psoriasis patient, makes votive offerings in his house in Hoang Xa village, about 16 km (10 miles) south of Hanoi October 29, 2012. Psoriasis is a non-genetic and non-infectious skin disease that currently has no cure.

One conventional tactic for treating autoimmune diseases like psoriasis, in which the body’s immune system launches an outsized attack on the the body’s own tissues, is to tamp down the immune system with suppressant drugs.

Martin Fussenegger, a professor of biotechnology and bioengineering at the Swiss Federal Institute of Technology–Zurich in Basel, Switzerland, has been working on this project. He designed human cells with genetic circuitry to sense proteins that trigger psoriasis.

"These designer cells cannot only sense psoriasis and its pro-inflammatory proteins, they can also process that information and tune an appropriate response to stop psoriasis,” Fussenegger says.

These designer cells work not by erasing existing symptoms, like most treatments, but actually by stopping psoriasis before it starts. Experiments with the treatment in mice have so far been successful.

“We could show that mice, which had been implanted with those designer cells, did not get a psoratic flare because the designer cells were early on detecting that the immune system is mounting an inflammatory response and were just chopping it off from the beginning,” Fussenegger explains.

The designer cell treatment involves an implant under the skin and, according to Fussenegger, could be used to treat other inflammatory diseases — like arthritis.

“The principle is kind of generic,” Fussenegger says. “We could exchange the sensor capacity of these designer cells so that instead of just sensing the two cytokines that are so specific for psoriasis, we could exchange them to sense molecules for other auto immune diseases.”

As promising as the new treatment seems, it’s still in early stages. Fussenegger guesses it will be another decade or so before it’s ready for use in people.

“It needs to be carefully tested according to the rules. And I believe we're getting there, but it's not an immediate product that people can expect in the next two to three years,” he says.