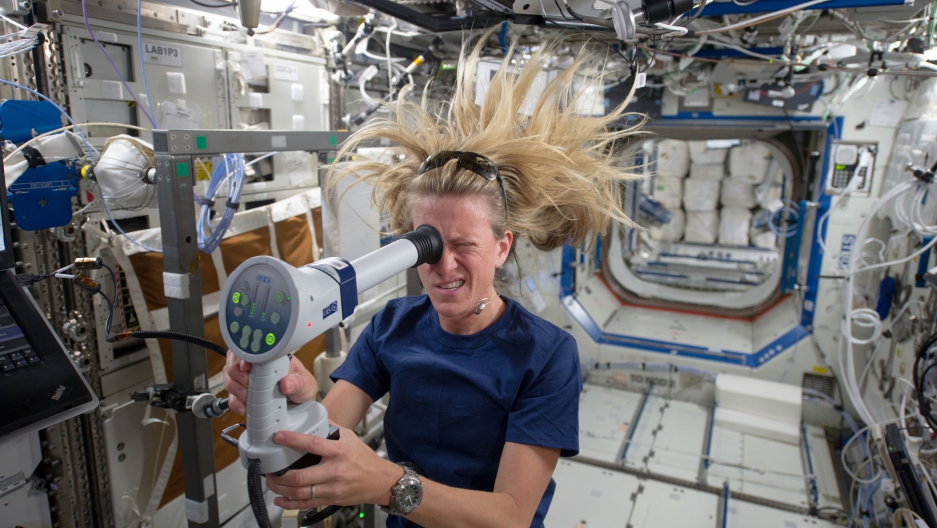 NASA astronaut Karen Nyberg uses a fundoscope to image her eye while in orbit.

For the first time since 2011, you can apply to be a US astronaut. The job listing went up last month at usajobs.gov.

NASA chief and former astronaut Charles Bolden says the application requirements are not as complicated as you might think.

“Believe it or not, it’s pretty straightforward,” Bolden says. “They have to have a bachelor's degree in a technical field. ... If they've already finished school and they're a doctor they're eligible. If they happen to be a pilot with an undergraduate degree, as long as they have a thousand hours in high performance jets, they're eligible.”

If the application is straightforward, however, the astronaut selection process is stringent.

“That's when we start looking for special things like a demonstrated ability to do a spacewalk — and since I never did a space walk, and I've never been close to a space suit, I'm not exactly sure how we test that down at the Johnson Space Center,” Bolden says. But you also have to demonstrate language capability ... and then you have to be able to demonstrate agility — manipulating robotic apparatus. I didn't have to do that either. I doubt if I could be selected now.”

Candidates selected in this current round of hiring will likely be going to lunar orbit and will do work to prepare the next round of astronauts for travel to Mars.

“The new astronaut class — they're definitely going to fly on our commercial vehicles. They're not going to be selected to come to work until 2017, and that's the first year we're going to fly our commercial crew vehicles. So they will be among the first to fly on those,” Bolden says. “Their next stop is actually going to lunar orbit and then eventually they will be the trailblazers. They'll be the ones that are going to do all the development we need in order to send perhaps the class after them to Mars. Some of them will stay around and some of them may go to Mars, but they know coming in that their job is to be the trailblazers for the first Mars occupants.”

Bolden, who is excited by NASA's new $19.3 billion budget for 2016, says the space program is focusing on both short- and long-term goals.

“We hope that we will be prepared to move out into the into the vicinity of the moon as our next area of routine operations for NASA,” Bolden says. “But most of our international partners are right alongside us with the destination of Mars for humanity in the 2030s as our ultimate goal.”