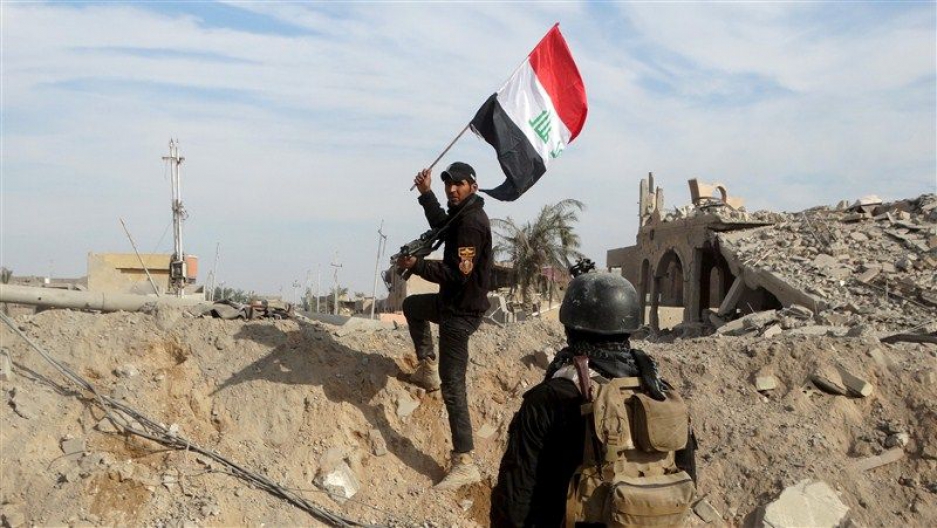 A member of the Iraqi security forces holds an Iraqi flag in the city of Ramadi.

There are signs that the tide of war in Iraq might just be starting to turn against ISIS.

Iraqi government forces this week re-captured the city of Ramadi, the capital of Anbar Province, in western Iraq. The army performed pretty well, according to US observers. But the victory may owe more to politics than military prowess.

The people of Ramadi, just like the rest of Anbar Province, are predominantly Sunni Muslims. The Iraqi government is overwhelmingly Shiite. And it seems Baghdad has been able to cut a deal with local Sunni tribal leaders to turn against ISIS. Thousands of Sunni militiamen assisted in taking back their city.

If this example can be replicated elsewhere, then it will be difficult for ISIS to survive in Iraq.

The understanding between Baghdad and the Sunni leaders appears to have had two key elements.

Ayub Nuri, editor of the Kurdish news service Rudaw, says one element was the demand from the Sunnis for Baghdad not to deploy irregular Shiite militias.

“People in Ramadi and in the Sunni areas of Iraq,” Nuri explains, “said there is no way we would allow an army that’s accompanied by Shiite militias to come into our areas, because they had seen what those militiamen had done in terms of killings, executions and destruction in other Sunni towns.”

The other key element was some kind of political assurance from Baghdad that Sunnis would no longer be persecuted, and might even be allowed autonomy to run their own affairs. He cites one source from Fallujah as saying “some Sunni autonomous region is on the horizon.”

Until now, Nuri says, the Sunni population of Iraq had been more afraid of the government in Baghdad than they were of ISIS. “The Sunnis of Ramadi and Fallujah and other parts of Iraq are not necessarily with ISIS. I think most of them do not agree with ISIS ideologically or as a political group or Islamic Caliphate.”

Nuri thinks the Ramadi model could be replicated elsewhere in Iraq, for example in Fallujah or Mosul. He points to the precedent of the Sunni Awakening in 2007 and 2008, when Americans were able to persuade Sunnis to turn against al-Qaeda in Iraq. Nuri says the Sunnis were “betrayed by the central government after the Americans left in 2011.”

“I think everyone should understand — the Americans, the outside world and the Iraqi government — that if they want to get rid of ISIS, they have to help the local Sunnis do it,” says Nuri.

“Everyone should allow the Sunnis to basically run their own affairs,” Nuri continues, “and make sure the Iraqi army or the Iraqi government is not going in there a few months from now and ruin it once again.”