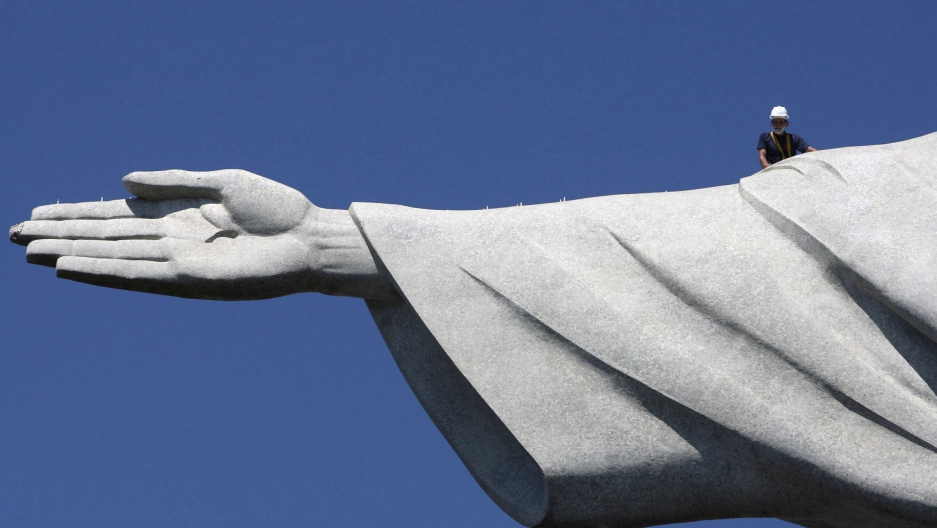 JOHANNESBURG, South Africa — Move over, "Christ the Redeemer." A new giant statue of Jesus is about to be unveiled in a Nigerian village.

Dubbed "Jesus de Greatest," the new statue was commissioned by a Nigerian businessman. It is due to be unveiled on New Year's Day outside St. Aloysius Catholic Church in Abajah village, in southeastern Imo state.

Obinna Onuoha, a devout Catholic, hired a Chinese company to carve the statue of a barefoot Jesus, arms outstretched, from white marble.

It will stand 28 feet tall, which makes it a good deal shorter than the famous "Christ the Redeemer" statue towering over Rio de Janeiro at 98 feet in height, not including its pedestal.

"We think religions can exist side by side," the businessman told Agence France-Presse. "We hope that people can live in harmony."

But not everyone is thrilled with the new statue, which has been criticized as idol worship. Some Nigerians on Twitter have wondered why the statue depicts a white Jesus.

Others may take issue with a giant Jesus statue as a symbol of peace and reconciliation in a country that is half Christian and half Muslim.

The Boko Haram insurgency has affected Nigeria's mainly Muslim north, killing some 20,000 people over the past six years. The predominantly Christian south of Nigeria has so far remained unscathed.

"Beware, that statue can't last long — Nigeria is not peaceful for this kind of stuff," said one commentator on a Nigerian discussion website.