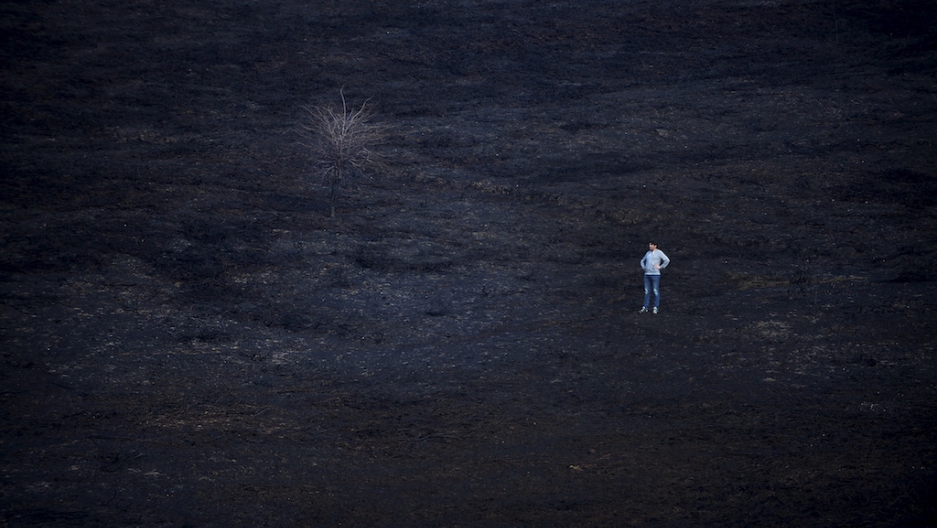 A man stands in the middle of a burnt forest following a bushfire near the town of Berango, near Bilbao in northern Spain, Dec. 29, 2015.
Credit: Vincent West
Share

Swathes of the US are under water. So is much of the UK. Spain and Australia are on fire. Hundreds of thousands of people are displaced due to flooding in Paraguay, Argentina, Uruguay and Brazil. Down here on Earth, things look pretty bad. From space, they look even worse.

NASA says this year’s El Niño is set to equal the worst on record: the 1997-8 weather cycle that gave the US and much of the rest of the world, in NASA’s words, “a wild ride.” Other experts say it could be the most powerful in a century. Either way, the extreme weather will continue into 2016.

For the States, that will likely mean blizzards, tornadoes, storms and canceled flights. For many poorer countries, the effects will be considerably worse. Messed-up monsoon seasons mean drought in India and poverty for its farmers, while the dry spell turns Indonesia into a tinder box and worsens its toxic annual forest fires. Sea levels around Pacific islands drop and coral reefs get bleached. Lack of rain in eastern and southern Africa shrivels crops and leaves millions short of food. The price of staples like rice, wheat and sugar will rise for everyone.

We wish we didn’t have such a gloomy forecast for you. But as climate change continues to exacerbate natural weather patterns like El Niño, we’re afraid that gloomy is the new normal.

Donald Trump’s run for US president may have started out as a joke — albeit a cringe-inducing one that only your weird racist uncle would make. But as the businessman blusters his way ever closer to the Republican nomination, the laughter has turned decidedly uneasy.

What’s even less funny is that, when it comes to right-wing populists like Trump, America isn’t exceptional. Europe, too, has its own cast of strident rightist politicians riding to notoriety on hostility toward migrants and minorities. Like Trump, they have simplistic answers for economic problems and promise extreme security measures to quiet voters’ fears over terrorism. And like Trump, they’re no laughing matter.

From the party leaders in Poland, Italy and France who claim that fleeing Syrians spread disease, to the Dutch “Politician of the Year” who calls Europe’s refugee crisis “an Islamic invasion,” to the Hungarian prime minister who built the border fence of Trump’s dreams, meet the most prominent Trump-ettes making noise in today’s European politics.

So Christmas is over, but why should there be a time limit on giving? On joy? On inspirational quotations from the world’s hottest* head of state?

There shouldn’t, is the answer you’re looking for. And now, thanks to these very special holiday gift sets, there doesn’t have to be. For a mere 78 rubles (around $1), you too can enjoy the wisdom — and admirable biceps — of Mother Russia’s favorite son, all year round. We present: the 2016 Vladimir Putin calendar! This limited-edition release will let you spend every day with Vlad — working out, fishing bare-chested, staring manfully at horses, hugging puppies and wearing ever-so-slightly camp little soldier hats.

If, though, you love Putin for his mind and not his body (tough call), why not treat yourself to all 400 pages of his collected speeches? This attractive volume is titled ‘Words Тhat Аre Changing the World: Key Quotes From Vladimir Putin’ and yes, in case you’re wondering, there’s yet another picture of VP on the cover! Place your order today! And be quick about it — we can’t all be as lucky as the 1,000 Russian state officials who were handed the book as an unsought gift from the Kremlin!

By the way, in case you think we’re joking — we’re not. Hurry now while supplies last.