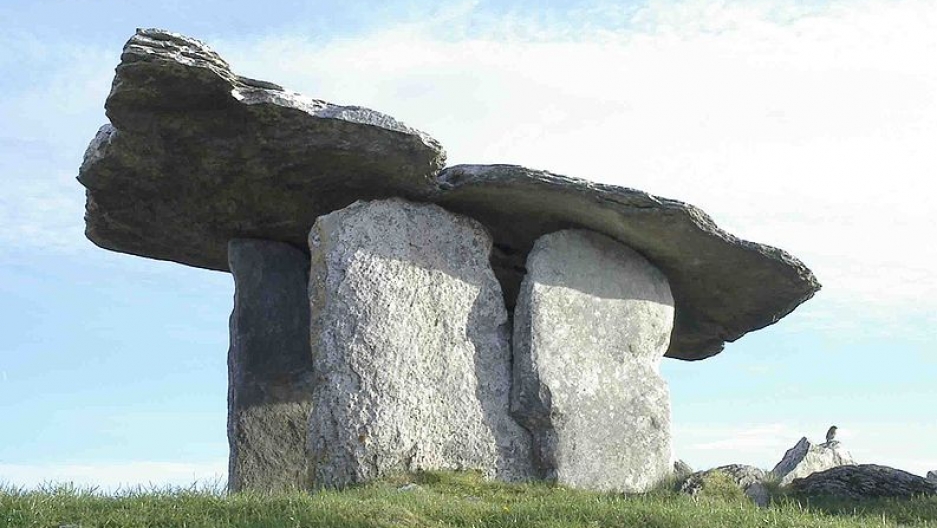 The Poulnabrone dolmen (Poll na mBrón in Irish) is a portal tomb in  County Clare, Ireland, dating back to the Neolithic period, probably built 5-6000 years ago.

She’s a brown-eyed, brown-haired woman, with a face that would be right at home in the Mediterranean or the Middle East.

She lived about 5200 years ago, and was buried near a stone monument and an ancient ring-shaped earthwork, in Ballynahatty, near Belfast. It was her people who built nearly all those megalithic tombs, monuments and stone circles, that you see in advertisements from the Irish tourism industry.

And it’s now being suggested that nearly everyone in Ireland at that time looked like Maria, like they were from the Mediterranean. And that’s because they were.

The genetic profile of these first Irish farmers indisputably originates in the Middle East. Maria’s closest modern relatives — genetically — are the inhabitants of the Italian island of Sardinia.

Maria lived a stone-age existence. Literally. Nearly all her tools and implements were made from natural products like stone and wood. But she was a farmer, meaning she did not rely on hunting and gathering for her food.

Her ancestors may have taken a few centuries to complete the journey from the Middle East to the cold and foggy forests of northern Ireland. The genetic evidence suggests a maritime route, across the Mediterranean, to southern Spain, then up the Atlantic coast.

Maria’s DNA has traces of an even older first people in Ireland, people who relied on hunting and gathering for food. But it’s only a trace, leading scientists to suggest that Maria’s Neolithic farming people displaced and replaced the hunter-gatherers.

But in turn, Maria’s DNA is almost entirely absent from the population of modern Ireland. So this indicates that at some point, Maria’s people lost out to a new and very different population.

Three male skeletons provide clues to help scientists explain what happened. They were uncovered on the island of Rathlin, off the coast of Northern Ireland.

Let’s call them the Rathlin boys.

The Rathlin boys lived about 1000 years after Maria, and their DNA is very different to hers. Genetically, the lads have a very close affinity to the populations of modern Ireland, Scotland and Wales.

They have the code that causes blue eyes, and genetic markers for certain diseases that are common in the Irish to this day. Interestingly their DNA appears to have originated in the steppes of what is now Ukraine and southern Russia, and spread westwards through central Europe to its outermost fringe in Ireland.

No-one is saying for sure that these were Celts. No-one knows what languages these people spoke. But the scientists on the DNA project says the genetic affinity with the modern Irish people “invites the possibility of the introduction of Indo-European, perhaps early Celtic, language" at the time they arrived, around 4300 years ago.

Their remains belong to the Bronze Age, meaning their tools and weapons were metal, rather than stone.

Historians have long known about these great technological shifts in Ireland’s history; first, the introduction of agriculture around 5750 years ago, then secondly the advent of metalwork around 4300 years ago. But there’s been great debate about what happened to the people.

One popular theory was that the population was pretty stable, and that they adopted new technologies through a process called cultural transfer. That might involve the immigration of a new elite, or perhaps just a few skilled workers.

But the scientists who studied the Rathlin Boys and Maria say the DNA evidence suggests that actually the technological transformations were occasioned by mass migration, and population displacement.

This fits in with DNA evidence from elsewhere in Europe. Oetzi, the famous iceman found in the Alps, is genetically a cousin of Maria’s, but their descendants disappeared from most of Europe. Except for Sardinia. For some reason, the descendants of those early Neolithic farmers were left undisturbed on Sardinia.

So did the ancestors of the Rathlin Boys kill off Maria’s descendants? It will probably never be known how much violence there was, if any. But it is clear that the wave of newcomers brought a new technology that transformed the economic and agricultural world. This alone probably gave them enough of a competitive demographic edge to overwhelm the original inhabitants. You know, if your stone-age farm can support 2 people per square mile, and your Bronze age farm can support 20, then the genetic odds are in favor of the Bronze age folks.

There may have been some intermarriage and intermixture, but not enough to be demographically or genetically significant.

So if the Bronze Age metalworking boys from the steppes of eastern Europe were indeed the proto-Celts, and started arriving 4300 years ago, then that’s centuries after Maria and her Mediterranean-type people built most of those megaliths that we associate with Ireland.

The scientists from Trinity College Dublin and Queen's University Belfast published their findings in the journal, the Proceedings of the National Academy of Sciences, on December 29, 2015.