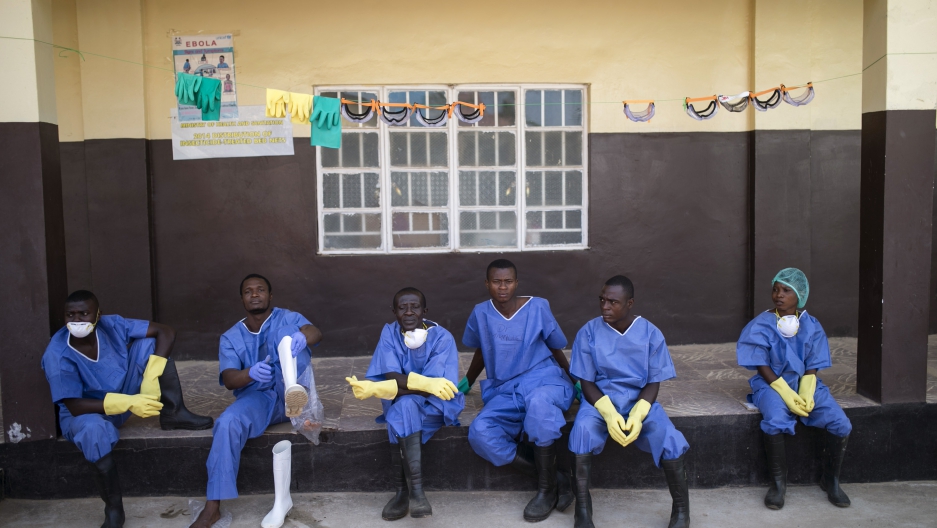 Health workers rest outside a quarantine zone at a Red Cross facility in the town of Koidu, Kono district in Eastern Sierra Leone December 19, 2014. Sierra Leone, neighbouring Guinea and Liberia was at the heart of the world's worst recorded outbreak of Ebola.

Guineans are celebrating a milestone this week. The country, which suffered through a devastating outbreak of Ebola, is now declared free of the virus transmission.

The World Health Organization said in a statement on Tuesday that "42 days have passed since the last person confirmed to have Ebola virus disease tested negative for the second time."

Now, it went on to say, the West African country enters a 90-day period of heightened surveillance to make sure that any new cases are identified and treated quickly.

Sheri Fink, who has reported on Ebola for the New York Times, says the response in Guinea has been mixed.

"You had people who were dancing," she says, quoting another colleague who is in Guinea. "There were others, like the survivors [...] they were taking this day as a day to remember family members who had died."

But there still are major challenges facing Guinea and the two other countries affected by Ebola — Sierra Leon and Liberia.

One example, Fink says, is the lingering issues that the survivors face.

"Survivors of Ebola don't just walk away," she says. "Some of them have severe eye problems that can be treated very effectively, very cheaply, but if they don't get that treatment, they could lose their vision."

There's also the psychological issues and trauma that come in the wake of such tragic events, not to mention the stigma that some survivors still face.

Fink explains that many of the international organizations that rushed in to help during the outbreak have promised to continue their support.

At least for now.

The coming months will be critical. WHO will maintain surveillance & outbreak response teams in #Guinea #Liberia & #SierraLeone through 2016

"What history shows us is that after a big calamity, there are often a lot of promises made and they don't always get followed through," she says.

But for now, Fink says she's happy to see pictures of big smiles on the faces of people in Guinea. She remembers the same time last year, when Guineans were dreaming about an Ebola-free Guinea.

Today, this dream seems closer to becoming a reality.