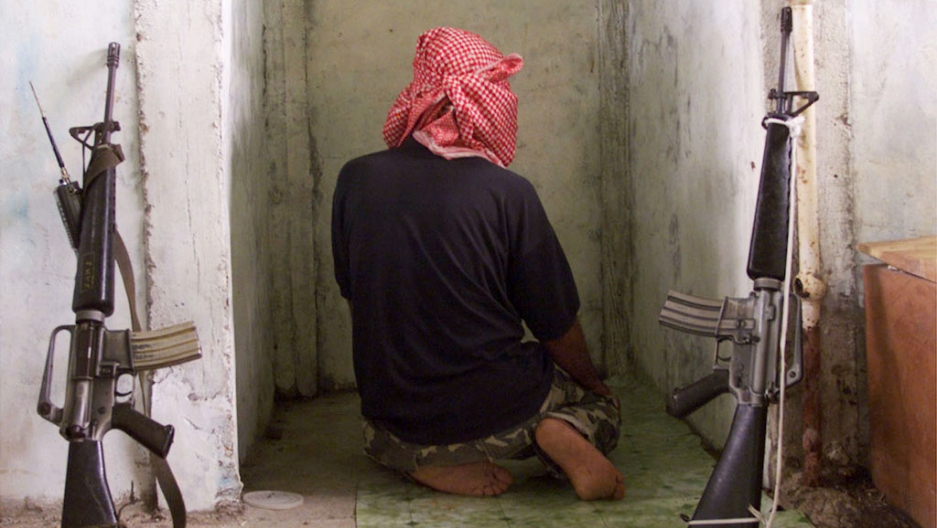 A vigilante prays at a mosque in Talipao village, a few kilometers away from the suspected hideout of Abu Sayyaf rebels in Jolo island in the southern Philippines, April 28, 2000.
Credit: Erik de Castro
Share

BANGKOK, Thailand — The Islamic State isn’t just the world’s premier jihadist organization. Like Coca-Cola or Nike, it’s also one of the world’s most recognized brands.

Its name alone evokes both extreme sadism and a terrifying sense of reach — a fear that radical acolytes lurk in all corners of the planet, many of them plotting spectacular violence.

That brand is ripe for exploitation. That’s why criminal gangs in the Philippines, where Islamic insurgency smolders on remote tropical isles, are now tapping the fearsome power of the Islamic State’s name.

Several commanders of Abu Sayyaf — a notorious pirate gang in the Philippines — have sworn loyalty to the Islamic State. In videos posted online, their foot soldiers wave the same black flag embraced by the Islamic State over the heads of Western hostages, who kneel in the jungle with knives by their throats. Abu Sayyaf rebels are seen in the Philippines in this video grab made available Feb. 6, 2009.

The desired effect is to present these militants as a Southeast Asian tentacle of an organized, wealthy and global operation that can strike fear in the hearts of Western presidents. Like the Islamic State, Abu Sayyaf claims its goal is to achieve a new, independent Muslim nation.

But in reality, it’s just a piracy and extortion ring with fewer members than many Los Angeles street gangs.

The group controls only about 500 men. Their specialty is kidnapping. They are known for nabbing Westerners who venture into the southern Philippines, where various Islamic insurgents have struggled for autonomy since the 1960s.

This gang’s oath to the Islamic State, and to obey its leader Abu Bakr al-Baghdadi, appears to be mostly theater.

“They’re just criminals attaching themselves to a well-known name,” says Warren Rodwell, a former soldier for Australia’s military who spent much of his life teaching English in Asia. “It’s theatrical.”

Rodwell became intimate with Abu Sayyaf the hard way. In December 2011 he was kidnapped by the group from his home in the southwest Philippines, held in their jungle camps for 15 grueling months and freed when his family handed over roughly $100,000. Australian national Warren Rodwell upon his release from 15 months of captivity at the hands of Abu Sayyaf, March 25, 2013.

Most of the militants, he says, are just poor villagers whose concept of jihadi warfare comes from bad Hollywood movies, not indoctrination from the Middle East.

They are also lacking the extreme piety professed by Islamic State troops. “The only time they became observant, praying multiple times a day, was when their cell phones ran out of charge,” he says. “Or maybe if our camp was too remote to send text messages to their girlfriends.”

“Most of these guys didn’t even go into formal marriages with Muslim women,” Rodwell says. “What they wanted to do was run around with Christian girls who they saw as dirtier.”

By most accounts, Abu Sayyaf is driven by greed, not ideology. But when it comes to extreme violence, however, the group’s credentials are impeccable.

It is believed to have beheaded more than a dozen captives in the last 15 years. Its militants have kidnapped more than 700 hostages and racked up millions in ransom payments. The group’s global relevance peaked after the Sept. 11 attacks in 2001, when its troops numbered more than 1,000 men.

Though founded with the help of seed capital from global jihadi icon Osama bin Laden, the group has never really outgrown small- to mid-sized operations on Philippine islands. Its most spectacular attack was a 2004 ferry bombing in Manila Bay that killed 116 people; the boat’s owners had reportedly refused to pay a $1 million extortion fee.

But Abu Sayyaf’s ranks were ground down by US troops deployed to fight alongside Philippine forces in the mid-2000s. Philippine police chief Jesus Verzosa crosses out the picture of an alleged Abu Sayyaf militant from a list of wanted group members, Feb. 25, 2010.

In Rodwell’s experience, Abu Sayyaf’s militiamen were poorly equipped, shoddily trained and bore no signs of a competent force guided by international jihadi networks. “Most were lucky to have even a fifth-grade education,” he says.

Southeast Asia — home to the world’s largest Muslim-majority nation, Indonesia — is indeed seeing a handful of people fall under the Islamic State’s spell.

According to Zachary Abuza, a National War College professor, up to 1,000 Southeast Asians have moved to Islamic State territory. But many, he says, have been “used as cannon fodder.”

Another analyst, Sidney Jones with the Institute for Policy Analysis of Conflict in Jakarta, says the total number of Indonesian fighting-aged males in the Islamic State is likely a mere 160. “And many of them,” she says, “complain they’ve been given menial jobs and haven’t been sent to the front.”

Compare that to the estimated 1,700 fighters in Iraq and Syria who’ve come from France, a far smaller territory than sprawling Southeast Asia, which is home to more than 240 million Muslims. A Pew survey shows that, like most Muslim-majority nations, Indonesians overwhelmingly despise the Islamic State.

There is a possibility, Jones says, that Abu Sayyaf could become more ideological as it links up with tiny cells of Islamic State associates in Indonesia. There are “petty criminal gangs using the name of ISIS for their own interests,” she says, as well as a few “committed people” within Abu Sayyaf as well.

Apart from Abu Sayyaf, one other terror group in the Philippines, Bangsamoro Islamic Freedom Fighters, has also declared a so-called affiliation with the Islamic State. But this pledge is equally flimsy and the rebels concede they have no plans to send fighters to Syria.

So far, it appears to be just another meaningless “alliance” forged with a smartphone camera and a YouTube account — a cheap way for local extortion rings to exploit the terrifying brand power of the Islamic State.